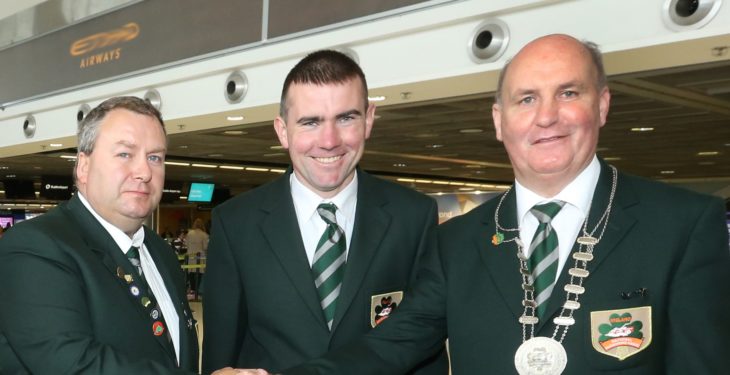 NPA President James Sutton wished Ger Coakly from Cork and Dan Donnelly from Wexford the best of luck as they prepare to fly out to compete in the European Ploughing contest in Switzerland. Image source: Finbarr O'Rourke

Two members of the Irish ploughing team – Jer Coakley from Cork and Dan Donnelly from Wexford – departed for Switzerland this week.

Both men are partaking in the European ploughing contest. NPA (National Ploughing Association) President James Sutton was at Dublin Airport to see them off – and impart the association’s support to them.

The contest is organised by the EPF (European Ploughing Federation), to which the Republic of Ireland’s NPA is affiliated. The NIPA (Northern Ireland Ploughing Association) is also affiliated to the federation.

The 2017 European contest is the 34th such event in the federation’s history. It takes place on August 19 and 20 in Diessenhofen, Switzerland.

In all, 23 competitors will vie for the honours – including the two men from the Republic of Ireland. There will also be two competitors from Northern Ireland – namely James Coulter and David Jamison.

The remaining competitors come from a long list of countries – as far away as Russia.

Interestingly, New Holland is a partner (sponsor) of the EPF.

As Europe’s largest outdoor event, according to the NPA, this is a major undertaking – last year’s event was attended by 283,000 visitors and this year more than 1,700 exhibitors will be present.