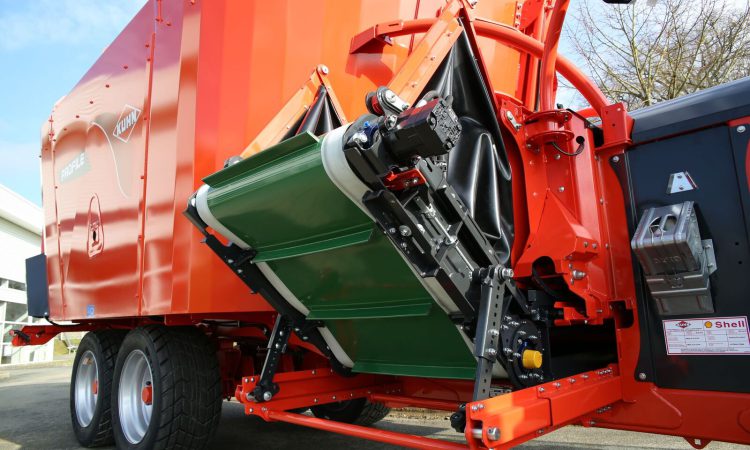 Kuhn will have some of its latest developments on offer at the upcoming Dairy Show.

The machinery giant will showcase its new Flexilift-equipped trailed mixer wagon and Cleanstraw-equipped straw bedder at the event, held at the Bath and West Showground, Shepton Mallet on Wednesday, October 3.

The Flexilift telescoping and tilting feed distribution conveyor system is available as an alternative to a standard cross-conveyor on all new Kuhn Profile mixer wagons.

Kuhn claims that it is designed to make it easier to distribute feed in buildings where space is limited.

The reversible, cradle-shaped conveyor can apparently be offset laterally via a telescoping mechanism to distribute feed to either side of the machine.

The Flexilift system uses a single, endless PVC belt which is driven by two hydraulic motors – one at each end of the conveyor – for “improved belt traction” irrespective of which side feed is being distributed to.

The single-belt design ensures all feed is distributed cleanly and accurately, Kuhn claims.

The new Cleanstraw system – available as an option on new Kuhn straw bedders and mixer wagons equipped with a blowing turbine, or as a retrofit upgrade for existing machines – reduces the appearance of dust in livestock buildings by applying a “fine mist” of water to straw as it’s distributed for bedding purposes. The Cleanstraw system comprises a 64L water tank and three misting nozzles mounted at the exit of the straw-blowing chute.

The machinery giant claims that trials have shown the air in a typical livestock building will be “dust-free within 30 seconds” after straw-bedding with the Cleanstraw system has ceased, compared to several minutes under normal conditions. The Cleanstraw system is available for all Kuhn machines equipped with a Polydrive blowing turbine.

The system is automatically activated when the Polydrive system is engaged and can also be armed or disabled via an in-cab switch.

This enables users of a combination straw bedding and feeding wagon to turn the system on when blowing straw for bedding, or off when dispensing feed, Kuhn says. 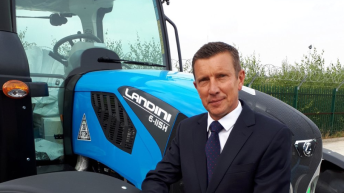 Changing of the guard at AgriArgo as Winnett takes the reins