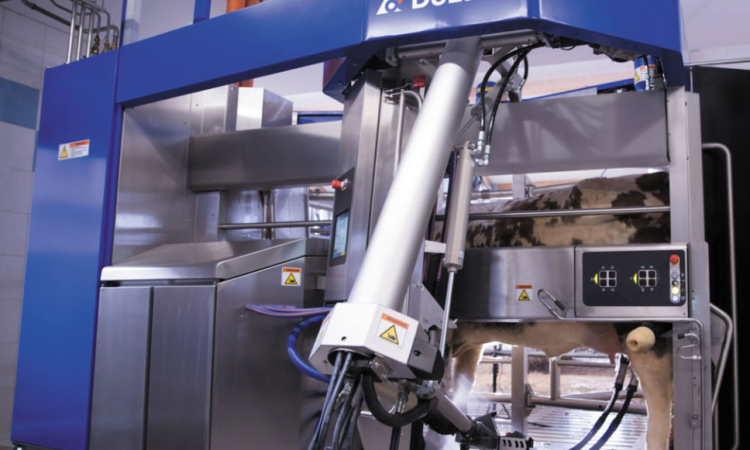 Described as a new experience for cows and customers, the DeLaval VMS V300 helps farmers by making them less reliant on future labour market uncertainties, while also keeping them at the forefront of animal welfare, food safety and farm profitability.

The VMS V300 system, which is now available worldwide, has already been installed on numerous farms throughout Europe. Farmers share their experiences of the technology below.

2.6 milkings per cow in Denmark

Farming in Logstor, Denmark, Soren Hojgaard Anderson milks 155 cows under an organic system on 260ha. Soren has been milking with VMS for 10 years. He operates three VMS milking robots – a 2008 model, a 2013 model and a new VMS V300.

When he put the new VMS V300 milking system to work, he found that with its 99.8% attachment rate, the new system is about one minute faster per cow; this allows him to increase productivity.

“Your employees can have normal working hours as well. It will be easy to be a farmer in the future,” Soren said.

Soren has noticed a number of benefits from the VMS system, including: reliability; smooth attachment; and no teaching of cow’s teat coordinates required. With the reduced milking time and higher attachment rate, Soren can also achieve 35 more milkings each day.

When Florent began milking with the new DeLaval VMS V300 milking system, with its 99% hit rate, the precision of the teat-spraying provided by DeLaval InSight started delivering health and cost benefits almost immediately.

When it comes to the benefits witnessed, the brothers cite an ability to attach to different udder shapes; peace of mind; very accurate teat spraying; and the accurate diagnostic tool (OCC) as the key benefits.

In Numberg, Germany, Alfred Piling milks 210 cows on a land base of 150ha. Annual milk production stands at 1.8 million litres, achieved over 2.6 milkings per day.

When Alfred put the new DeLaval VMS V300 milking system to work on his farm, the DeLaval PureFlow preparation system and Real Quarter Milking with four ICAR approved milk meters, resulted in the lowest bacterial count he has ever seen and the highest quality milk.

With the new system, Alfred has observed a 43 second reduction in milking time per cow.

10% more capacity to grow the herd

Johan and Willem Van de Tweel – a father-and-son team – milk 156 cows on 90ha. When the DeLaval VMS V300 was installed, Willem had growth in mind.

Not only does the increase in efficiency give him 10% more capacity to grow his herd, he can add more VMS V300 units over time, easily and cost-effectively.

The VMS just fits well because you’re creating a bit of flexibility in your working rhythm.

“The cow is optimally given the space to go and stand where she wants. If she wants to milk, then she can go milk. Does she want to eat first? Then she goes to the feeding area,” Willem said.