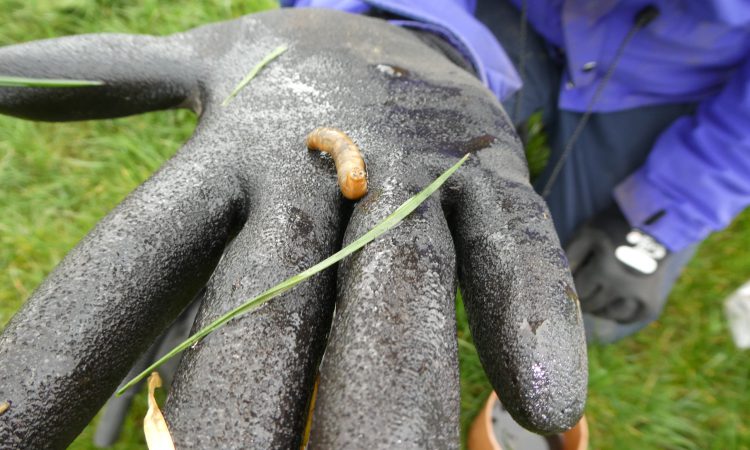 An industry survey hopes to identify the extent of the leatherjacket challenge for Northern Ireland grassland farmers.

The survey is run by Leatherjacket Mitigation Strategies, a farmer-led group, which is part of the European Innovation Partnership (EIP) project.

The survey can be found here and can be completed by any grassland farmer in less than 10 minutes.

It asks a range of simple questions regarding leatherjacket presence or absence and the management techniques employed to manage or prevent them.

From the answers provided, the project hopes to better understand the geographic spread of leatherjacket presence in Northern Ireland and identify potential factors that may increase the likelihood of infestation.

The survey is the first step in a range of activities planned by the EIP project, which will run until June 2023.

Leatherjackets are the larvae of craneflies, commonly known as ‘daddy long-legs’. Having been laid as eggs in late summer/early autumn, the leatherjackets then develop over the winter months, reaching maturity in the spring, before emerging as craneflies during the summer.

During the day, leatherjackets feed underground on roots and stems of grass or cereal plants, emerging at night to eat plants above ground.

They can cause significant damage from loss of yield. In 2016, the use of the chemical chlorpyrifos (Dursban) to control leatherjacket infestations was banned.

This has left farmers with no available chemical method to manage leatherjacket populations on grassland or arable crops. As a result, the focus now is on reducing the likelihood of infestations occurring in the first place.

The Leatherjacket Mitigation Strategies EIP project is investigating the challenge of controlling leatherjacket populations in grassland. It is being led by four farmers from Fermanagh, who are working alongside AgriSearch and AFBI.

The group’s key objective is to determine the factors that influence leatherjacket prevalence on-farm and propose a range of alternative mitigation strategies that can be undertaken to reduce the risk of infestation of which there is currently very little known.

The Northern Ireland European Innovation Partnership (EIP) scheme has been co-funded by the European Agricultural Fund for Rural Development (EAFRD) and the Department of Agriculture, Environmental and Rural Affairs (DAERA).