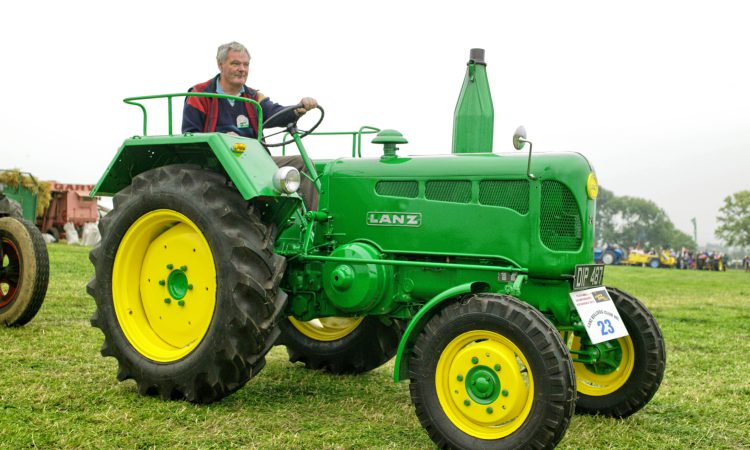 John Deere is undeniably a mighty corporation that now straddles the globe with sales worth nearly $36 billion in 2020.

Its origins can be traced way back to 1830 when the original John Deere opened a blacksmith shop in Grand Detour, Illinois.

A few years later, he took a broken blade from a sawmill and fashioned it into a plough mouldboard, and so the company we know today was born.

Up until 1918 the company was purely a manufacturer of implements, and its entry into tractor production came with the purchase of the Waterloo Boy Gasoline Engine Company in that year, although it had already experimented with its own design beforehand.

From that date, it gradually established itself as a popular tractor manufacturer that turned out ever more powerful models which, in the main, were built around the tried and trusted two-cylinder horizontal engine arrangement it inherited from Waterloo Boy.

This twin-cylinder format lasted up until 1960, as the company had settled down to a regular rhythm of corporate life, with various deals being done, the usual board disputes over management structure, and so on.

Radicalism was not encouraged and the Johnny Poppers, as these tractors affectionately became known, continued to sell in large numbers.

This serenity was not to last however. In 1955 a young executive by the name of William Hewitt had been appointed chairman, and he was all out to bring change to the company and invigorate it with a new vision.

One debate that had been going on within the company was expansion abroad.

At the start of the 1950s, a project to build a plant in Scotland for the manufacture of combines and mowers, had reached an advanced state before circumstances closed it down.

The company had reached an agreement with the UK government in which the British would build the factory with public money and then lease it back to John Deere for the production of combine harvesters and mowers.

Unfortunately, the plan fell through, mainly due to a Conservative government displacing the Labour administration in 1951.

Although the project was never officially cancelled, John Deere was told that the funds for construction would not be released.

Internally, the idea had also met resistance from the export department which had lobbied instead for a factory in France, producing a much wider range of machines, including a tractor of 25-30hp.

The attention of the board was then drawn away by other ventures, especially the idea of fertiliser production, and so the idea of foreign expansion took a back seat until Hewitt took over.

One of the first items that landed on the desk of the new chairman was an approach by James Duncan, the president of the newly formed Massey Harris Ferguson company, to consider a merger between the two companies.

This was a rather startling development, and the reason for Duncan proposing such a an idea is not immediately clear, although there may be some clue in the situation of his company at the time.

Massey Harris Ferguson (MHF) was beset with internal strife and difficulties as competing managers argued over falling sales in America, while the board ran shy of the basic restructuring of the company that was needed.

Added to this mix was the upset caused in the Ferguson camp by Harry Ferguson deciding to sell up without telling anyone beforehand, a shock that many had yet to come to terms with.

It is likely that Duncan saw a merger with what was still an indigenous and rather conservative home market-orientated company, as a way of increasing the sale of his products in the United States.

John Deere itself took the idea seriously and invested time and effort in meetings with its rival in a bid to thrash out a plan that was acceptable to both parties.

Although at first sight the plan seemed to commend itself, the deeper both sides delved into the details, the less attractive the scheme became.

One attraction for John Deere was the extent of the MHF agency network in the west, an area which had seen a large reduction in the number of Deere outlets due to a pre-war agreement with Caterpillar to share dealerships.

This is a story in itself, but the upshot was that many smaller Californian JD dealers had been forced to switch to other brands, while Caterpillar dealers focused on the post-war building boom, rather than worry about selling a few tractors to farmers.

Despite this being one great mutual advantage to both JD and MHF, who still had an extensive representation in that state, the difficulties of meshing the two companies with overlapping product lines and distinct parts supply requirements, proved too much to contemplate.

With the mention of the Caterpillar affair, it ought to be noted that as part of that link some John Deere tractors were sold abroad, but only through Caterpillar dealers rather than the company’s own efforts.

The need for a new plan

And so the management of John Deere once again found itself without any firm plans for exporting the company’s products in any great quantity.

Yet Hewitt had not forgotten this intention and it wasn’t long before another opportunity presented itself.

In late 1953 the company had been quietly approached by a west German banker who held 30% of the Lanz stock.

Lanz had been one of the two dominant German tractor manufacturers up until the war, Deutz being the other, but the company was suffering from a multitude of problems.

The famous Bulldog tractor was ageing and the single cylinder format had reached its design limitations.

Sales had suffered due to the division of Germany into east and west while the factory at Mannheim had been rebuilt with little thought to future production techniques.

The price for 51% of the German company had been set at $2.5 million. An investigation by Deere’s own accountants suggested that a further $13 million would need to be invested to bring it up to scratch.

John Deere now faced a dilemma. There were two basic ways forward, either build a fresh factory, as had been proposed for Scotland, or buy an established manufacturer and use it as a base to expand upon.

In the end they avoided making that decision and the proposal was voted down in December of the same year, as was another to expand into South America.

Despite this setback, the germ of the idea had been planted and it surfaced again in 1956 when a second, much more potent group of executives, including William Hewitt, visited Germany to take another look.

In the intervening years, Lanz had spent a good deal of money on new machine tools, although the tractors remained the same.

This certainly increased the value of the company, and despite many imponderables, a deal was struck for a majority shareholding for $5.3 million.

Having purchased the company, the first task was to drop the Bulldog product line completely and set the factory up to manufacture the American-designed Dubuque line of diesel models.

And so John Deere established itself as an international manufacturer of tractors and farm equipment.

It was not an easy transition; there existed a huge culture clash between the American idea of enterprise and the the European idea of cooperation, and even tractor use.

Yet the company stayed the course and Mannheim went on to become the hub of operations and manufacture for Europe and beyond.