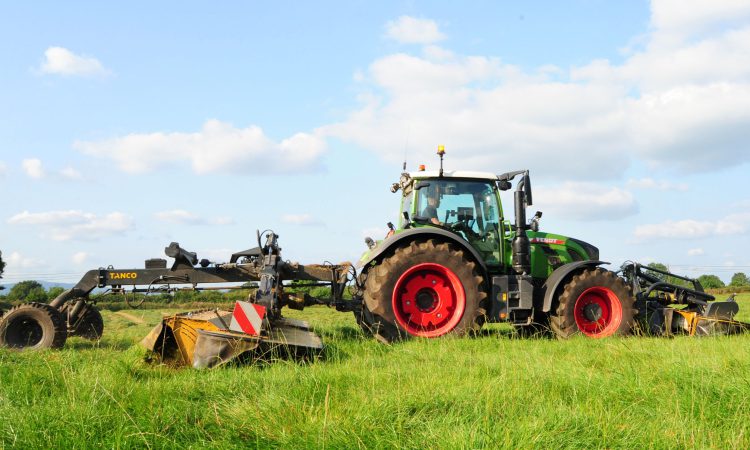 Tanco has been busily making farm machinery for over 50 years at its home base in Bagenalstown, Co. Carlow, the Republic of Ireland. The company is best known for its range of bale wrappers, but back in 2019 it quietly moved into the mower market.

When entering a new market, most companies would start off with a small machine to both test the water, and to test itself and its ability to manufacture the equipment.

Tanco has taken a different route – the new mower models are full butterfly sets, which are available in either 9m or 10m versions.

The butterfly becomes a bee

An entomologist might frown at comparing them to butterflies though, for instead of the mowers’ beds folding up vertically, they fold back horizontally onto a trailed frame, making them more like the wings of a bee or wasp.

The advantages of this arrangement are manifold, according to Michael Dollard, Ireland and UK sales manager for Tanco.

View the mowers in action in the video below.

The first and most important point he makes is that of efficiency; by mounting the mower beds onto a trailed frame, the flotation characteristics are greatly improved, resulting in a reduced power requirement.

Along with this claim goes the assumption of reduced fuel consumption, which those already operating the mowers appear happy to confirm.

Tanco quotes one user as achieving up to 25% reduction in fuel usage as well as 50% increase in productivity.

These are impressive figures, and watching the lack of drama in the field as the beds lift out of work on the headlands, and the smooth progress when in the crop – they don’t appear unreasonable.

Having less weight hanging from the back of a tractor is also considered a plus. There is some debate as to how well tractors can cope with the stress of a fully mounted butterfly set.

Many farmers and contractors are happier with something bigger, heavier and more powerful than may actually be needed, to provide the strength and stability they feel is required.

This latter point will become ever more relevant as the power density of engines increases and the power-to-weight ratio shifts in favour of lighter tractors, providing greater outputs.

Such a development suggests that less massive tractors will be able to offer the performance required to drive a full set of mowers, with the resultant concern over stability.

Splitting the weight of the mowers between the rear axle of a smaller tractor and an extra pair of wheels, will obviously reduce overall soil compaction.

Less weight also reduces the rolling resistance of the whole unit, further increasing fuel efficiency, as does having to move less metal about the field.

Adding to the attraction of the Tanco mowers is the ease and speed at which they fold for transport.

It really only takes a few seconds, with none of the shaking and swaying associated with heaving the mower units into an upright position.

When folding the steering system for the trailer, wheels are automatically adjusted back to ensure that the unit follows the tractor round bends, rather than shooting off the road altogether.

This is the third season that the mowers have been out in the field and Michael Dollard reports a keen interest and a swelling order book.

Reliability has been excellent he is happy to note, with very few problems. The major bought-in components include Commer beds and gearboxes, and Walterschied power shafts, which are one and the same company now.

Why a company well-known for its bale wrappers and sheer grabs should branch out into the mowing business, is an interesting question.

Michael Dollard explains that the concept was brought to them by another company which had considered, and then discarded the idea of producing them.

Tanco felt that they were an ideal sized firm to take them on, as they had the engineering expertise as well as the flexibility of being a medium-sized company not bound by corporate blinkers.

At present, the company does not see mowers coming to dominate its business, or any other product displace bale wrappers, 95% of which are exported.

Meanwhile, these mowers are garnering a great deal of appreciative comments wherever they are demonstrated.