Milking hundreds of cows and finishing 2,000 Brazilian-origin bulls in Egypt 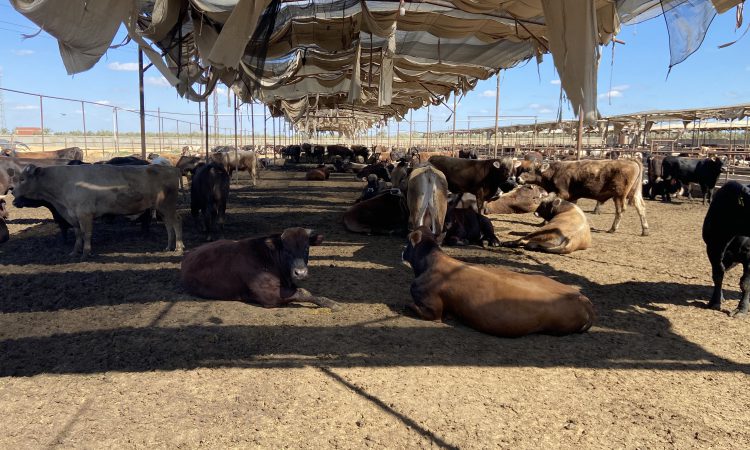 Earlier this year, AgriLand embarked on a Bord Bia and Department of Agriculture-led trade missed to North Africa – visiting both Algeria and Egypt.

The trade mission was organised in an effort to maximise opportunities for Irish companies to meet the rising import demand for dairy and livestock in both countries.

While in Egypt, Bord Bia’s senior meat and livestock sector manager, Joe Burke, along with representatives from the Irish Livestock Exporters Association visited a number of dairy units and a large-scale feedlot owned by Dr. Abderaouf Al Gohary.

On an early winter’s morning – although it could be easily be compared to a pleasant summer’s day in Ireland with temperatures hovering around 18ºC – we left our base in the city of Cairo and headed north towards West Menoufia in northern Egypt.

The first hour or so of the journey was spent dodging other vehicles and navigating bumper-to-bumper traffic as we left the city surroundings. As we edged further outside the city, the common sound of car and truck horns eased and there was nothing but open road ahead of us.

After traveling for three hours, we reached the first dairy unit overseen by Dr. Gohary – who was very welcoming and open about his business.

On this unit, there are some 400 animals and lactating cows produce 33L/day on average. At the time of the visit, Dr. Gohary – who has a PhD in animal husbandry – was receiving 7.5 EGP which equates to 43c/L, while the cost of production amounts to 5.5 EGP or 32c/L.

Milk produced is used for many products such as yogurt (both drinkable and edible), feta cheese and other types of cheese. Dr. Gohary noted that processors are keen on both quantity and quality – high protein and fat percentages – and his most recent report at that time indicated 3.45% protein and 3.75% fat.

Feeding was ongoing; maize silage is loaded into a feed wagon and mixed with Egyptian cotton seed and imported soyabean from Brazil. This total mixed ration (TMR) is placed in feed troughs located in front of the sand-based pads.

Milking takes place in an 8-unit, double-up, herringbone parlour which is carried out by three farm workers. This parlour was close to retirement and plans were in place to upgrade the parlour to facilitate more technology and a faster milking time (two hours).

Additionally, feed is not fed in the parlour and all animals are fed the same ration regardless of production stage.

Dr. Gohary explained that he has imported a lot of dairy stock from Europe – which now forms the backbone of the herd. Typical countries include: Germany, the Netherlands; and a proportion of heifers have been sourced from Italy.

Along with running the dairy enterprises, dairy heifers are imported and sold to smaller farms in the locality; these farms are much smaller businesses with common herd sizes of 25 cows.

When it comes to breeding, AI is the method used and Dr. Gohary reckoned he has a conception rate of 70%. Conventional semen is the top choice as sexed semen can be three times the price of conventional semen, he said.

Heat detection is carried out by farm staff who walk the sand-bedded pads daily. If a heat is detected in the evening, she is inseminated the next morning and vice versa; bulls are introduced to ‘clean up’ after AI.

Some heifers are kept as replacements, while some of their male counterparts are finished at 12 months-of-age weighing approximately 500kg.

One of the most pressing issues for the team occurs during the summer months, when temperatures soar up to 45ºC in July and August and cows experience heat stress; this can affect production.

However, the main problem with this heat is high humidity – which also occurs during the night.

Canopies are located right across each farm which provide shade from the sun, while fans and water sprinklers are used to keep cows cool.

The unit was undergoing an expansion phase in February and a new sand-bedded pad and canopy was being built to house beef animals.

Timber ‘shutters’ are used to form concrete feed troughs. We suspect it is not ‘TAMS spec’ and the only PPE required on-site is a sun hat.

From here, we loaded back onto our minibus and headed for Dr. Gohary’s second dairy unit, which was located a short distance away.

It was a similar setup as the first. The only real noticeable changes were the breed of some of the cows and the colour of the feed. Brown Swiss featured heavily here and they were feeding on what Dr. Gohary called “Egyptian clover”.

This unit was located beside a vineyard – which also was owned by Dr. Gohary; grapes will be ready for harvesting in May.

An area of this unit was also under construction. Provisions were in place for another 400-500 head beef unit which was due to be completed soon.

We then moved to the beef feedlot, where Dr. Gohary was finishing 2,000 bulls that were imported from Brazil. Bulls arrived onto the unit weighing approximately 250-300kg.

The aim here is to have all bulls finished at approximately 500kg in time for the Ramadan festival, which will take place from April 23 to May 23, 2020. There is a massive demand for beef in the lead up to Ramadan and higher seasonal prices can be achieved.

While Dr. Gohary noted that the dairy enterprise is the most profitable, he explained that the beef-finishing operation returns a profit in the region of 20%.

A diverse breed selection was evident consisting of Friesian, Angus, Jersey, Shorthorn and Brown Swiss types – among others.

No growth hormones are used, but Dr. Gohary said he can achieve growth rates in the region of 1.5kg/day and up to 2kg/day for some Angus types; the bulls are fed a TMR of maize silage, soybean and alfalfa.

The timing of the consignment is crucial for Dr. Gohary and these bulls arrived in October. This allows enough time to get them finished for the lead up to Ramadan – when prices are generally higher.

There are 25 employees on this unit and bulls are weighed on arrival and when they are leaving the feedlot. Again, the environment was similar to the dairy units, with shade and shelter provided via canopies.