The Northern Ireland Assembly is back in power after a three-year absence, following agreement from a majority of political parties to proposals put forward by the Irish and UK governments.

The talks succeeded over the weekend on Saturday, January 11, with backing from Sinn Féin, the DUP, the SDLP and the Alliance Party, following marathon talks led by the UK government's Northern Ireland Secretary of State Julian Smith and the Tánaiste and Minister for Foreign Affairs Simon Coveney.

Following the return of the assembly at Stormont, it was confirmed that Northern Ireland's first and deputy first ministers will be DUP leader Arlene Foster and Sinn Féin's leader in Northern Ireland Michelle O'Neill respectively.

Alex Maskey of Sinn Féin was elected as the assembly's new speaker after a vote, with three deputies including: Christopher Stalford of the DUP; UUP MLA Roy Beggs and SDLP's Patsy McGlone.

The new Minister for Agriculture will be farmer and DUP MLA for Lagan Valley Edwin Poots.

The role of Minister for Justice is being taken up by leader of the Alliance Party Naomi Long.

Meanwhile, DUP representative Diane Dodds has been appointed Minister at the Department for the Economy, while Sinn Féin MLA Conor Murphy will take up the role of Minister for Finance.

Ulster Unionist Party (UUP) MLA Robin Swann is the new Minister for Health, who will take on a current dispute with health trade unions. 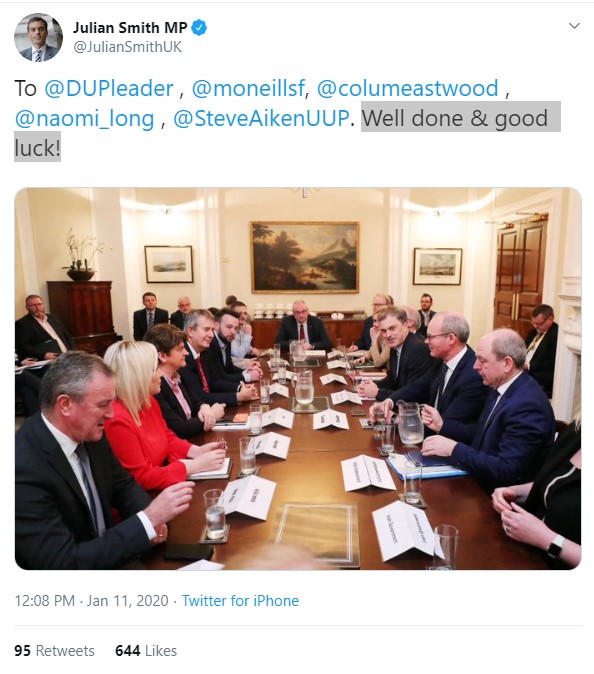 Taking to social media, Northern Ireland Secretary Julian Smith congratulated the new assembly and wished them good luck ahead of taking on their new roles.

The last 24 hours have been historic for Northern Ireland moving on.

"I need to give my deepest thanks to my Department of Foreign Affairs team for months of work."