Police in Sussex recovered over 50 stolen farm machines and power tools after executing a search warrant at a premises in Cross-in-Hand on October 27.

Officers from the Prevention Enforcement Team (PET) found a collection of items that were suspected to be stolen from lawnmowers, chainsaws, leaf blowers and an industrial wood chipper.

Police also recovered a quad bike, tractor, a caravan and a trailer in the raid.

This warrant is the culmination of extensive work by officers investigating burglaries and thefts of tools and machinery from farms in the rural areas of north Wealden as part of Operation Atlanta.

“This operation has helped us develop intelligence on criminals operating across Sussex and the wider south-east region.

To recover more than 50 tools and machinery was a fantastic result and we are in touch with many of the rightful owners to get these items returned to them in due course.

“Our work continues now to find those people responsible for these crimes and hold them accountable for their actions,” he concluded.

An appeal for information has been launched following the theft of a Nugent trailer along with a number of fence posts from a yard in Co. Armagh in recent days.

It has been reported to police that, over the past weekend, a Nugent branded 8ftX4ft trailer along with a payload of fence posts has been taken from the vicinity of Traynors Auto Parts a few miles outside of Armagh.

“The fence posts almost filled the trailer making it quite distinctive.”

It is believed that a large 4X4 jeep-type vehicle may have been used.

The police officers took to social media with photos of a Nugent 8ftX4ft trailer – which is not the one taken but the same model – and the type of fence posts it contained.

The PSNI statement concluded by stating: “If you recall seeing a similar trailer being towed or have any information that may prove helpful, please ring 101 quoting reference 291 of the 09/11/2020.” 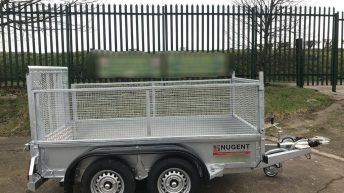