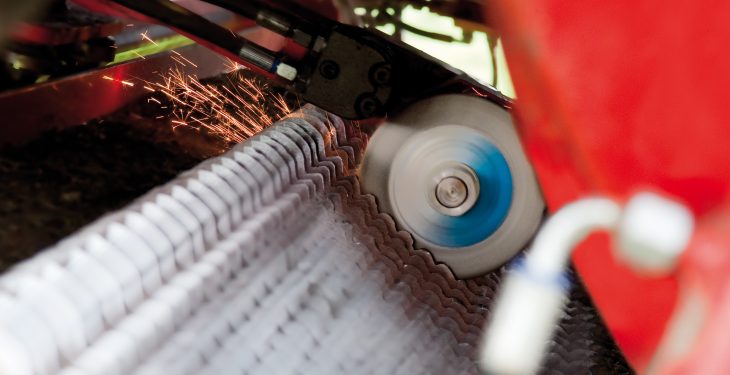 The new model features the same technology that is employed on the larger Combiline loader wagons, albeit in a shorter overall length.

The claimed theoretical chop-length is 34mm, thanks to the Powercut 45-blade knife-bank. In front of that sits the 6-row ‘floating’ pick-up reel. The company claims that the “real, 100% floating function” of the pick-up enables optimum ground tracking.

The so-called Easy Move knife-bank swing outs – to provide easier access for maintenance and knife sharpening. This feature will be familiar to users of existing Pottinger wagons – and indeed those of several other brands also. Pottinger says that it originally developed and patented its system, claiming that it is still the “benchmark”.

The patented Twinblade double-knife system, with individual knife protection, is available as an option. Having to carry a replacement set of knives, say Pottinger, can now be a thing of the past – thanks to these reversible knives.

The new model also has a lowered scraper floor and can be “quickly transformed from loading mode to transport mode”.

Pottinger also recently announced a package of upgrades for other 2017 wagons, concerning a new 3t drawbar for the EuroProfi, Torro and Jumbo wagons. This effectively adds an extra tonne to the highest permissible laden weight. Just as importantly, says the firm, is the additional boost in traction – because more weight is transferred to the ground.

Next up are the new automatic transport and work settings, which concern all models from the Primo up to and including the Torro CombiLine. This upgrade was already standard on Jumbo models.

These features, says Pottinger, are designed to make life easier for the operator. In addition, the pick-up effectively has a higher ground clearance because the pivoting drawbar raises automatically when needed.

The upgraded mechanical ‘forced’ steering system, for some models, is said to provide two benefits: convenience and an extended service life. The lockable track rod “makes hitching easier”. A collision guard protects the track rod against damage and prevents it from being clipped by the tractor’s rear tyres when turning.

There is also a new work-lights package, with seven LED flood-lights. Work in the field and at the pit at night, says Pottinger, is now safer – with two floodlights in the loading chamber, two on the tailgate and two around the pick-up. A further light illuminates the chopping system. The new lighting package is available for all models from the Primo right up to and including the Jumbo CombiLine. The only prerequisite is that a ‘Power Control’ terminal is fitted. 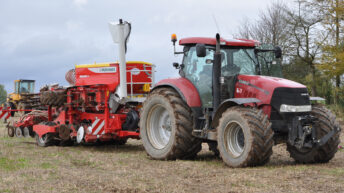