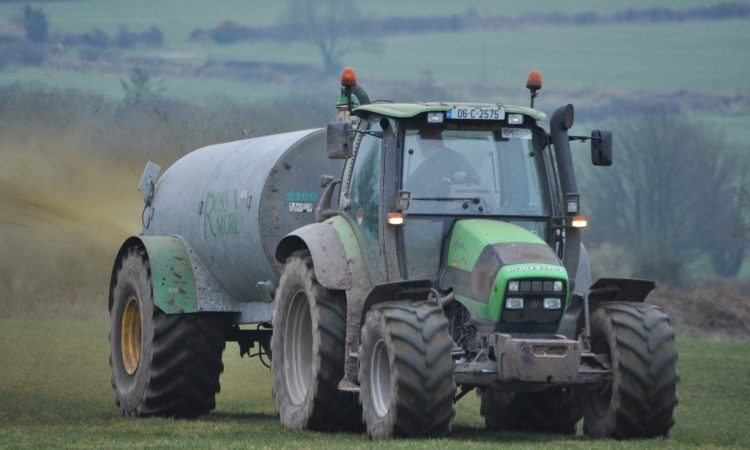 Northern Irish farmers are reminded that the closed spreading period comes into effect from midnight tonight (Monday, October 15), the Department of Agriculture, Environment and Rural Affairs (DAERA) has said.

Commenting on the matter, a DAERA spokesperson said: “The closed spreading period comes into force from midnight October 15, and runs until January 31.

It is a mandatory requirement of the Nitrates Directive and the ultimate aim is to protect water courses from pollution, the spokesperson added.

The closed period prohibits organic manures, including slurry, poultry litter, sewage sludge and abattoir waste, from being spread from October 15 to January 31.

“Farmyard manure must not be applied from midnight on October 31 to January 31.

“These periods represent the time when the risk of nutrient leaching is at its highest and there is little or no plant growth.

It was noted that all farmers are required to have at least 22 weeks of slurry/manure storage for their livestock enterprises, while pig and poultry enterprises require a minimum of 26 weeks.

Having enough tank capacity gives the ability to store organic manure until the closed period has ended and have flexibility in the timing of spreading if conditions are unfavourable in early spring.

“However under exceptional circumstances, beyond the control of and not foreseeable by an individual farmer, a limited amount of slurry can be spread during the closed period,” the spokesperson said.

If slurry must be spread during this time, evidence must be available to demonstrate to NIEA (Northern Ireland Environment Agency) that all reasonable steps were taken to manage the situation, and that there was no alternative.

“If slurry has to be spread under exceptional circumstances, it should be on low-risk land and all usual spreading conditions followed. Tanks should not be emptied.

“Only enough slurry should be spread to leave adequate storage for the remainder to the closed period,” the department spokesperson cautioned.

If farmers have concerns they are advised to contact DAERA on 0300-200-7842 or their local farming organisation.

Guidance on the Nitrates Action programme 2015-2018 can be found on DAERA’s website here.