Following the summer no farmer will forget – for all the wrong reasons – silage yields in Northern Ireland hit their lowest in 12 years, according to the December 2017 departmental agriculture survey.

Overall tonnage was up slightly on 2016, but only because the area harvested also increased compared to last year.

It follows a year of wet weather and “impossible conditions” meaning in many areas farmers were not able to lift their second and third cuts out of the field.

On the other hand, a cold and wet winter means many cattle are still indoors even in some of the driest parts of the country.

The combination has put farmers under pressure as they try to make less silage go further.

The survey provides estimates of the numbers of cattle, sheep and pigs on farms at the beginning of December. In addition, it provides information on levels of hay and silage production and sowings of winter cereals.

Cattle data (except heifer estimates) are extracted from APHIS, the identification, registration and movement database for cattle in Northern Ireland.

Pig numbers and all the crop areas are derived from a sample survey of farmers.

The production of silage in 2017 recovered slightly on 2016 levels – a year when production was also lower than average – to reach approximately 8.8 million tonnes.

The methodology for the December survey records the area of land on which silage was harvested at least once, irrespective of the number of cuts subsequently made.

However, poor weather conditions hampered second and third cut silage making and this was reflected in a drop in average yields for 2017 to 29.5t/ha, the lowest yield recorded in 12 years.

It’s no surprise that 2017 was also a dismal year for hay. The area of hay saved decreased by almost two-fifths in 2017 to approximately 7,000ha, the lowest ever recorded, with yields also tumbling to a 15-year low. 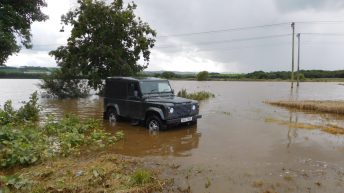 ‘We feel like we’ve been forgotten about’ – flood-stricken farmers