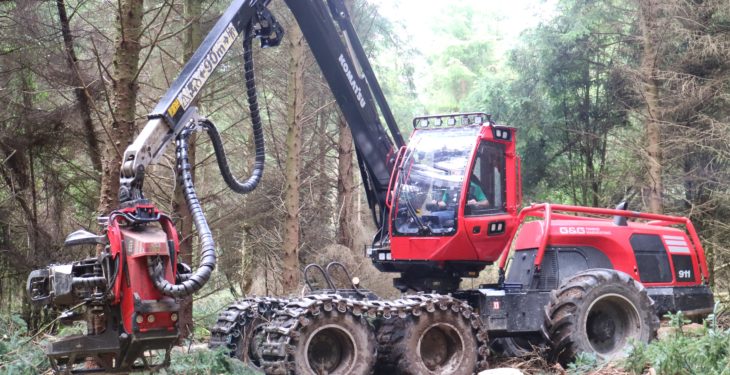 G&G Timber Harvesting is a relatively new venture; it’s based in Camross Co. Laois and is owned and operated by brothers Greg and Garrett Cuddy.

The brothers are no strangers to the timber harvesting business and have spent their lives working in the woods.

Greg explained: “Our father Jim, as well as all our uncles, has been involved in timber all his life in some shape or form; he initially started off with horses before mechanisation came in.

“When the era of machines was ushered in, the iconic Ford County took over.

“Both Garrett and I have spent our lives in the woods from the young age of 12; starting off painting tree stumps before moving up the ranks to chainsaws and, finally, operating machines such as harvesters, forwarders and trucks.

You could say it’s a way of life for us. It’s what we grew up doing; yes, it’s a tough job but we truly love it.

Together, the duo has worked at almost every aspect of timber harvesting over the decades.

They have operated in every corner of the country, working with numerous different timber contractors up until 2009; that’s when they made the big decision to go out on their own and start G&G Timber Harvesting.

Greg recalled: “We made the decision to go out on our own for a couple of reasons. It allows us to be our own bosses, as well as being able to build up a company and business to eventually pass on to the next generation – if they choose to take it on.

“It was very tough to get going, but we were lucky enough to tender and get a long-term [five-year] contract with Coillte; that allowed us to get up on our feet.”

Over the next eight years, the company grew – not necessarily in size but in workload. Productivity was largely fuelled by the brothers’ attitude to just getting on and getting the job down, as well as not being afraid to invest in more modern machinery.

These two machines were then worked for over three years, before being replaced by a Valmet 911.3 harvester and John Deere (formally Timberjack) 1010E forwarder.

These machines were kept busy for another two-to-three years; having now been replaced by the entity’s first brand new units – namely a Komatsu 911 harvester and a new John Deere 1010E forwarder.

Speaking about the investment, Greg explained: “2017 was a big year for the company; we made the decision to buy two new machines. It was a major investment for us.

“We chose Komatsu for a number of reasons. The 911.3 [built by Valmet, which is now owned by Komatsu] we had previously was bought with 18,000 hours on the clock; it worked with us for three years – harvesting on average 25,000t/year without any trouble.

“This was a big plus, as well as the fact that Komatsu was local to us – for back-up and service.

Turning his thoughts to the forwarder, he said: “The John Deere was the best of what we had used or operated ourselves over the years. It’s very simple – if it’s not broken, don’t fix it! So that’s why we went to John Deere in Co. Wicklow and bought the new 1010E.”

The duo was also joined in 2017 by another brother – David – who has a wealth of machinery experience. This was gained operating forwarders and timber harvesters around the country for different contractors.

By morphing into a trio, Greg believes it has strengthened the company and given them more confidence. “By being brothers, it has made running the business much easier.

While it’s not always easy, it does work for us.

“I have full confidence to leave the wood and know that the machines will be looked after. I know the job will not only be done but will be done right. Because there are three of us, it allows us to double-shift the harvester or forwarder – to keep up with demand.

“It also leaves one person free for parts runs or to keep on top of paperwork.”

The new Komatsu 911 is best described as an “all-rounder” when it comes to harvesting timber. It’s designed to be able to operate in thinnings, as well as clear-fell scenarios.

It’s surprisingly nimble when thinning, thanks to a cab-mounted crane that can slew 360º. The cab itself rotates with the crane – meaning that the operator always has a “full view” of the harvesting head. The cab also self-levels hydraulically.

Inside the cab, the operator is surrounded by dozens of switches and buttons – all conveniently located on the two armrests; the main joysticks also fall close to hand.

The large, light-filled windows, of which architect Dermot Bannon would approve, are toughened to ‘bulletproof’ standards – in case a saw chain snaps outside.

At the rear, the engine and transmission live under an electrically-operated hood; this is protected by an exoskeleton steel structure to defend against falling trees and other debris.

Powering this beast is a 6-cylinder, turbo-charged AGCO Power engine that kicks out 231hp and 950Nm of torque.

Power is delivered from the transmission out to the front, geared bogie system, which incorporates a mechanical locking differential.

At the rear, the single-swing axle also has a mechanical locking differential. Hydraulic stabilisation keeps everything on the level.

At the end of the 11m crane sits the business end of the machine – the harvester head. This impressive piece of engineering prowess can measure the diameter of the tree, cut it into pre-set lengths (depending on its diameter), as well as de-limb the entire tree in one pass; this all happens in a matter of seconds.

The tree is firstly grabbed by four claws, which double up as knives to clean off the limbs. It is then cut with a high-speed chainsaw.

Hydraulic power is courtesy of a dual-circuit, load-sensing system with variable-displacement piston pumps. These are capable of churning out 400L/min at 1,600rpm (280 bar).

Once the timber is harvested, it is left in bundles for collection by the next equally-impressive machine – the John Deere 1010E forwarder.

John Deere is not only famous for manufacturing agricultural equipment but, since buying Timberjack in 2000 and re-branding its machines as John Deere units in 2006, it is now also well-known for producing forestry equipment. G&G’s 1010E forwarder is an example of such a machine.

The primary job of the forwarder is, as the name suggests, to ‘forward’ or move the processed timber to the roadside – for collection by trucks.

Power is supplied to a stepless ‘Variospeed’ hydrostatic transmission and, subsequently, transferred to 8WD units. These are booted out with 710/40R24.5 tyres, with chains to boost traction. All in, the 16.5t machine can carry an 11t payload from the deepest and darkest depths of the wood.

The party piece of the 1010E has to be its cab; it rotates 290º, tilts and even automatically levels itself.

So what does the future hold for G&G Timber Harvesting?

We want to continue doing what we are doing; bigger is not always better and we are happy keeping it simple, efficient and productive.

“The biggest challenge we have is keeping work ahead of the machines.

“These new units will allow us to further grow the business and continue to operate hand-in-hand with Coillte (which provides 90% of our work), as well as carrying out private jobs for farmers and forestry owners around the country,” concluded Greg. 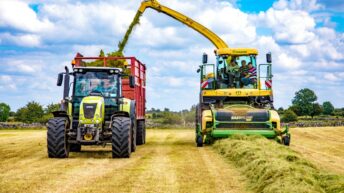 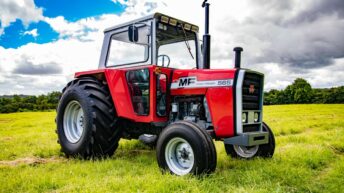