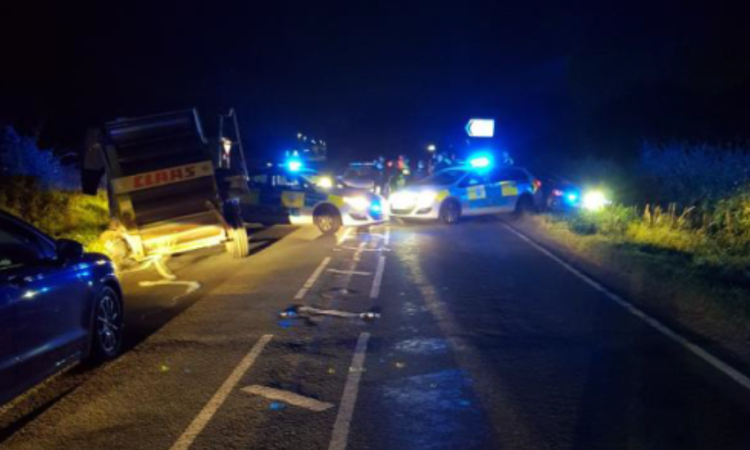 Police in Lincolnshire in the UK stopped a stolen tractor last night, Thursday, September 5, with a squad car road block – after pursuing it for 25 minutes at around 14 miles/hour.

According to a report in local media, cops were called when the tractor was seen driving with a dim headlight and towing what appeared to be a baler.

Lincolnshire Live reports that armed response police found the tractor swerving around the road at 11:00pm. Either the tractor or the baler had a shredded tyre, with the exposed wheel rim creating sparks on the road surface.

The tractor failed to stop, and was pursued for about 25 minutes before being stopped by two squad cars parked across the road near Corringham in north-west Lincolnshire.

A 29-year-old man was arrested on suspicion of stealing the tractor, causing criminal damage to the road, and failing to stop for police.

Superintendent Paul Timmins, speaking to Lincolnshire Live, said the incident “had the potential to cause severe damage and was a risk to life”.

“The tractor was going at a slow speed and was weaving over both sides of the road. One of the tyres from the tractor or what it was towing was shredded and there were sparks as it was going along the road,” Superintendent Timmins explained.

Not a typical vehicle stop but here’s a tractor being stopped last night near Corringham after it was stolen from Osgodby!

“The driver failed to stop and we pursued it at slow speed for 20 to 25 minutes. There is quite a lot of damage to the road surface from the wheel rim,” he added.

Superintendent Timmins said that the focus of the police was on stopping the tractor before it reached a built up area.

On this side of Irish sea, a tractor towing a low loader was stopped in Co. Limerick when the driver was caught using a mobile phone.

In a statement on social media on Tuesday, September 3, the Gardaí said: “[The] driver of this tractor and trailer unit [was] using [a] mobile phone while negotiating [a] busy Dock Road Roundabout in Limerick City.”

A fixed charge notice was issued to the driver in question.