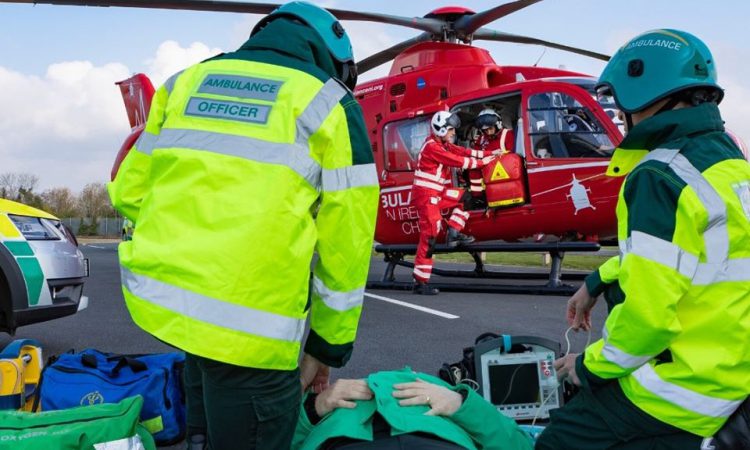 Recycling and horticultural projects by staff and prisoners at Maghaberry during the Covid pandemic have raised £5,100 for Air Ambulance NI.

Justice Minister Naomi Long recently joined Maghaberry prison governor David Kennedy at the Air Ambulance charity’s base in Lisburn to present a cheque for the fantastic amount of money raised.

Prisoners at the maximum-security facility were involved in recycling over 10t of plastic cups, while others made hanging baskets, planters and pot plants which were sold to staff and prisoners’ families.

It’s not the first time the prison has achieved success with its horticultural talents. In 2019, a show garden created by a team of 14 prisoners won a National Trust Gold Award.

Commenting on the fundraising total, Justice Minister Naomi Long said: “This really is a remarkable fundraising effort by both staff and prisoners at Maghaberry who have shown great enthusiasm and imagination with initiatives during the Covid pandemic to support the community.

“Air Ambulance NI is a wonderful charity. But I am aware that many of their fundraising events this year have had to be cancelled.

“The money raised by Maghaberry Prison will be very welcome and I know will be put to good use by the charity in their tireless work to ensure that a critical care team can be there when called upon.”

Kerry Anderson, head of fundraising from Air Ambulance NI, said: “We are extremely grateful to the prisoners, families and community for choosing to support Air Ambulance NI charity.

The amount raised will help with several costs including helicopter maintenance and fuel. The medical team are needed on average one to two occasions each day to help seriously ill and injured patients which can be the difference between life and death.

David Kennedy, Governor at Maghaberry, said: “Air Ambulance are our neighbours, based close to Maghaberry Prison, and staff and prisoners will often see the Air Ambulance helicopter fly overhead on its way to a critical incident.

“In the same way neighbours have supported neighbours in the community during the pandemic, Maghaberry has been able to support the Air Ambulance charity.

“We have a very successful recycling facility inside Maghaberry and alongside the horticultural projects, they provide purposeful activities for many prisoners.

“I am very proud of the fundraising efforts of staff and prisoners in collecting this fantastic amount of money for Air Ambulance NI.”