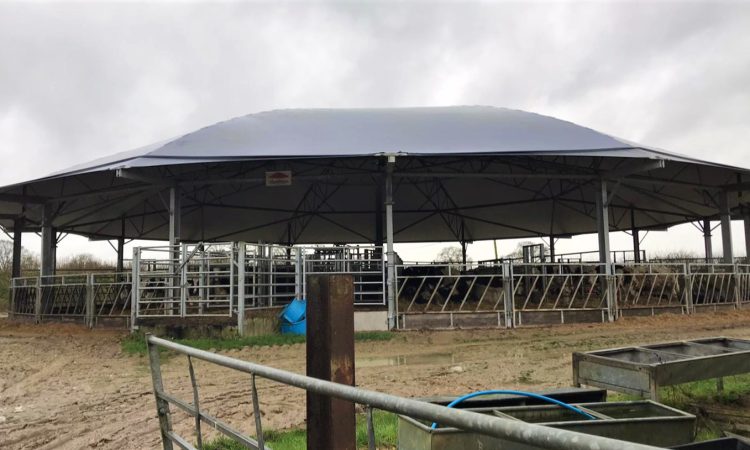 Farming in Malmesbury, Wiltshire, in the UK, David Maidment – alongside his father – has been operating a calf-rearing enterprise, under ABP’s Blade Farming system, for the past 12 years.

David opened the gates of his farm to the participants in Teagasc Green Acres Calf to Beef Programme, who were on a tour in the UK last week.

ABP’s Blade Farming model has been in operation since 2001 and involves calf-rearing and beef finishing units.

ABP sources calves for David and supplies all inputs, while he supplies the water, labour and electricity. In return, he receives an agreed fee/calf provided target weights are met at the end of the rearing period; there are also bonuses available for the rearer.

The processor then sells these weanlings to beef finishers with a forward contract for their finished cattle back to ABP.

David aims to run six batches of 100-110 calves through his purpose-built calf-rearing shed – which is equipped with an automatic feeder – bringing David’s total number of calves reared each year – through ‘Blade’ – to approximately 600 head. 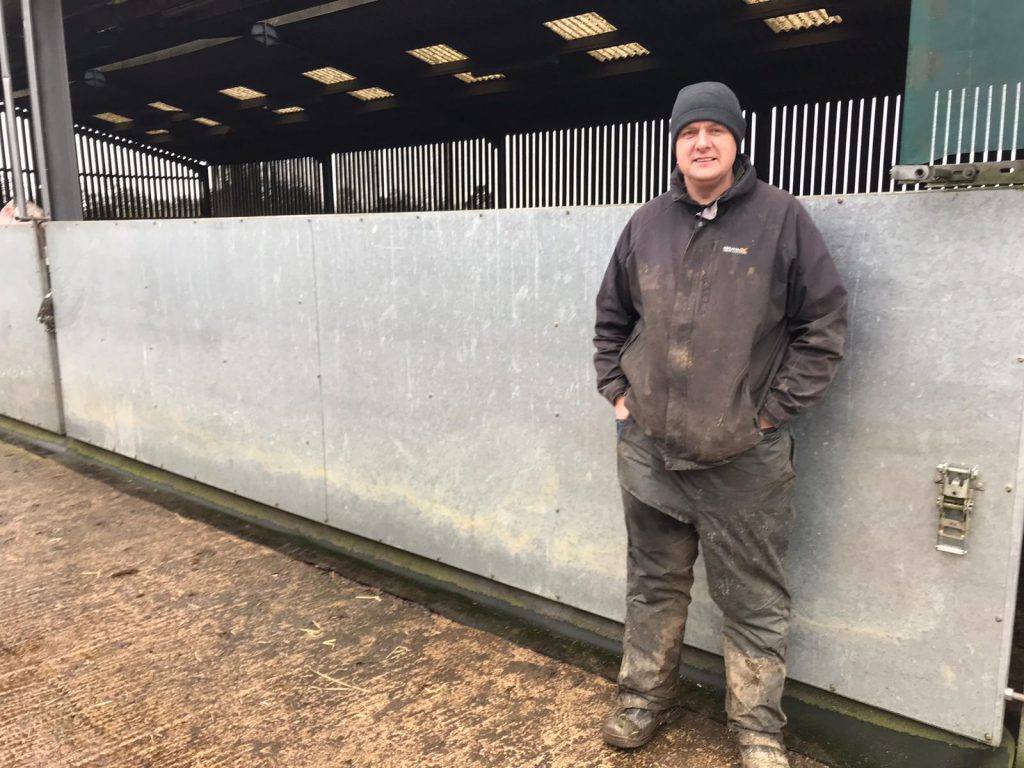 In conjunction with this partnership, in the last two years, David and his family now run their own beef-finishing enterprise.

As mentioned, ABP sources calves for David’s operation both from marts and direct off dairy farms, with a preference given for farm-to-farm movements; procuring all 100 calves in one batch also has its advantages.

However, this is not always possible and can sometimes lead to health issues – something we see quite often in Ireland when calves are purchased from multiple sources.

“If you had them all from the same farm, you’d be fine – especially with the continental calves, out of 100 calves, they may have come from 50-60 different farms and you might get six from one farm, but also a lot of single calves from others,” David explained.

The majority of calves reared through the ‘Blade’ system on David’s farm are continental-cross calves from the dairy herd, which arrive on the farm at two-to-four weeks-of-age, weighing approximately 45-50kg.

These calves will be reared and weaned before being moved off-farm – mostly to local finishers involved in ‘Blade’ – to begin the next stage in the production cycle. 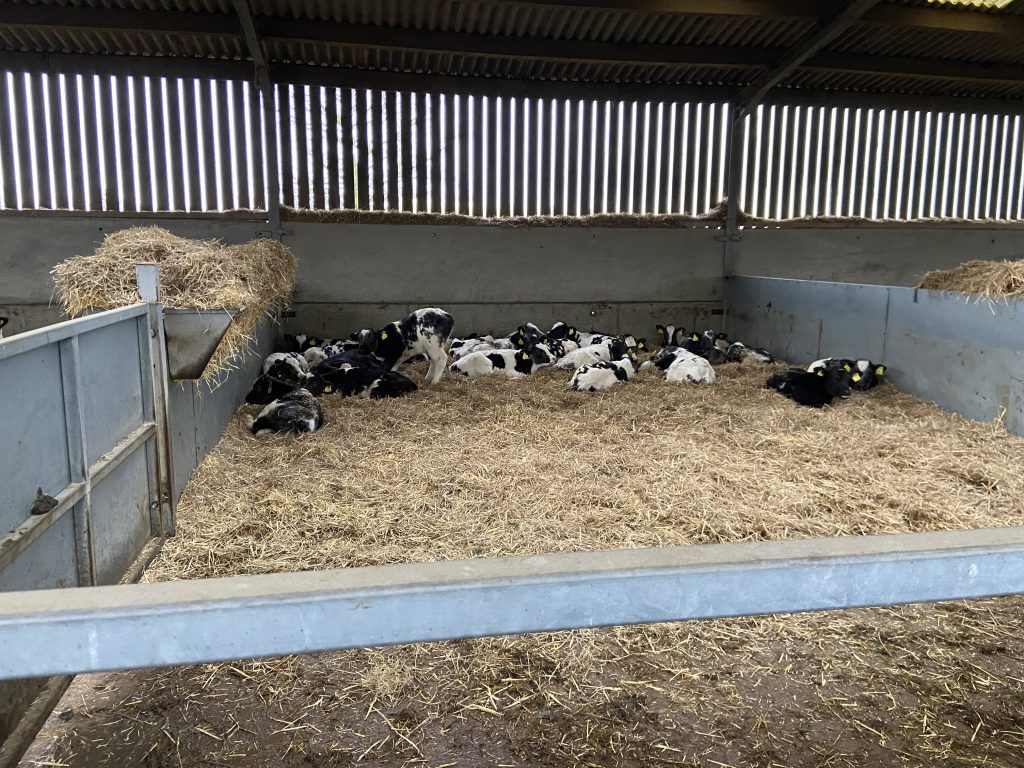 While the beef price in the UK has stayed ahead of prices available here in Ireland, British farmers were also exposed to downward price pressure in recent times.

With this, one of the challenges over the last six months or so has been getting the calves moved onto fattening units. These farmers don’t want the weaned calf due to the potential value of that animal post-finishing and slaughter.

This has a knock-on effect on the rearer, as calves are slow to move off the farm, leading to a delay when it comes to bringing in a new batch. However, ABP pays a daily rate for every day the calf stays on the farm after the rearing period.

While the calf house itself is similar to units that we have here in Ireland, there are some aspects which are completely different – especially the flooring.

In this particular unit, “free-draining stone” is located under a bed of miscanthus and wheat straw. Wheat straw is used as it is that little bit cheaper and not as appealing to the calves, David noted.

The surface is scraped every two-to-three weeks, before being re-bedded with a machine known as ‘Spread-A-Bale’. This machine is attached to a loader and pulls the bale apart rather than chop it – keeping dust to a minimum. 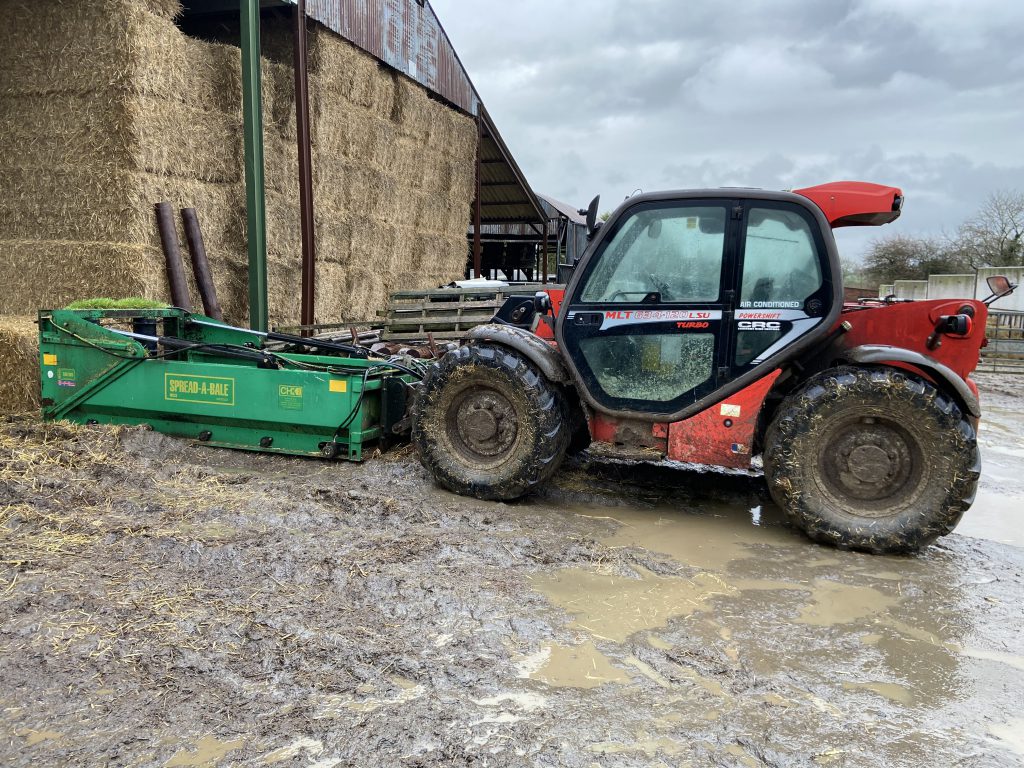 The entire unit is cleaned out after each batch, power-hosed and steam-cleaned. The shed contains smooth-finished, concrete walls and galvanised-dividing gates – which can be removed for cleaning – making this process easier.

When asked if this is the ideal shed for rearing calves, he said: “We try and keep everything as simple as possible. Simplicity is a key word around here. But, I’m a firm believer of what works on one farm, doesn’t necessarily work on another.”

The shed was purposely kept that little bit lower than your normal shed. It measures 12.5ft to the eve gutters with a gap at the apex for the removal of stale air.

“We find that the airflow is so much harder to get right in a taller unit,” David added. 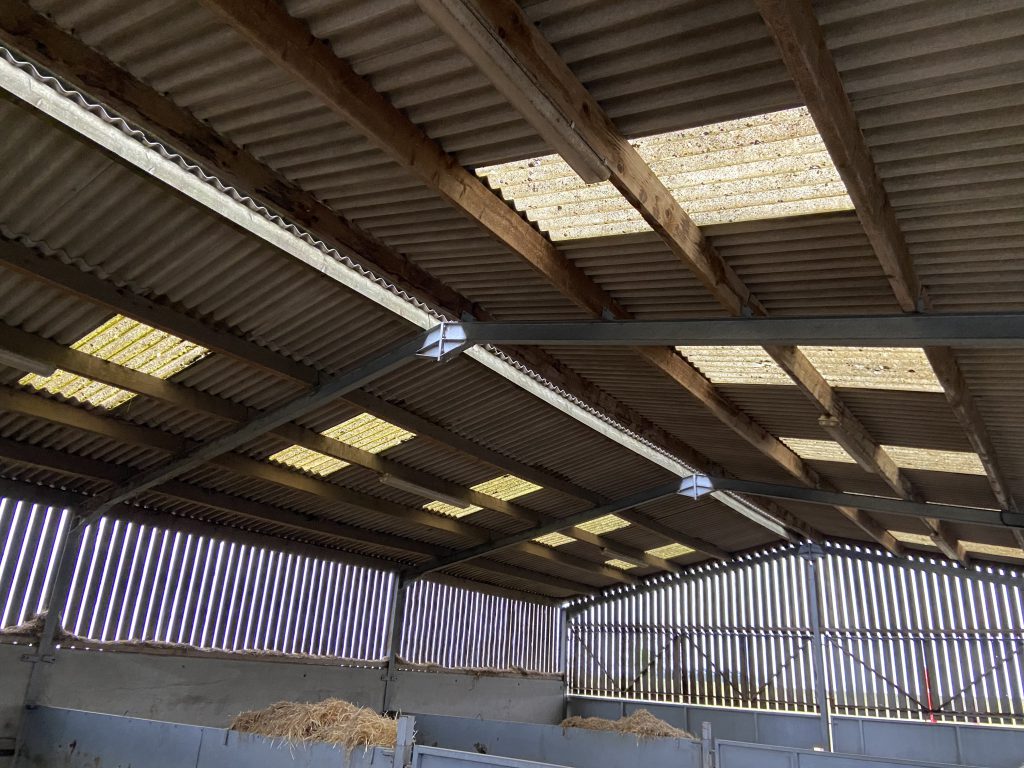 As mentioned, calves are fed on an automatic feeder and receive 6L/day of milk replacer from day one (130g/L or 780g/day); however, a structured feed plan is implemented which limits the amount fed to the calves per feed when they arrive.

Smaller quantities are fed more frequently. But, as they get older, by reducing the number of times they feed – by giving them more per feed – encourages the calves to eat more concentrate.

“We only feed 1.5L/feed at the beginning, because we have no idea how they were fed before they came in here. They then go to 2L/feed, then 2.5L as they get older and, in the last four weeks, they are at 3L/feed,” he said.

ABP supplies a 17% protein calf ration – or ‘cake’ as it is referred to in the UK – which is fed to the calves ad-lib. David aims for calves to be eating 1.5-2kg of this ration by weaning, before pushing on to 3kg thereafter.

“We feed a little over one bag of milk replacer (22-24kg) and approximately 200-250kg of cake depending on how long the calves stay. 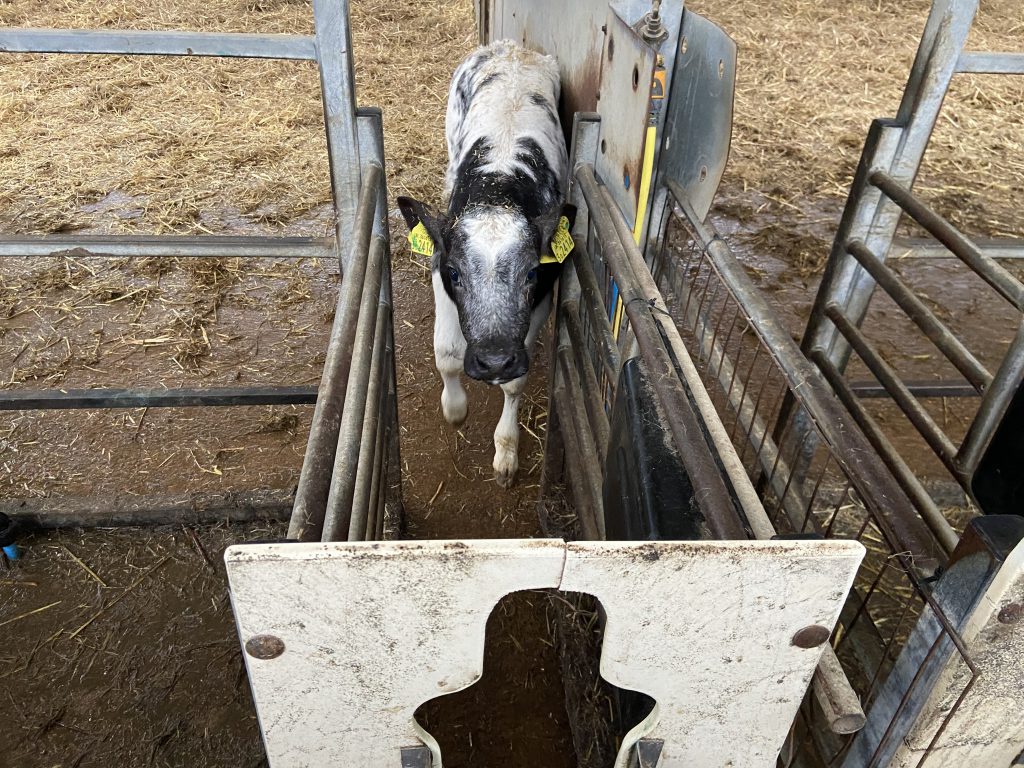 “It’s all very accurate; we have to record everything for ‘Blade’ – including how much medicine we use per day and, once a month, we have to do a stock take,” David said.

Like Ireland, one of the most common illnesses on calf-rearing units in the UK is pneumonia.

“Generally, pneumonia is what we have to treat for. We don’t really get scours, but pneumonia is our big problem. However, fresh air is the key,” David highlighted.

“The automatic feeder does a lot of the work when identifying sick calves, but we also walk the pens morning and evening – the feeder could throw up a calf and, when we investigate, it would normally be sick and need to be treated,” he added.

A strict vaccination programme is implemented after calves are allowed to settle; they are also wormed and tagged.

David noted that between weighing, vaccinating, worming and tagging, they can process 20 calves/hour or a full batch of 110 calves in roughly six hours, when they first arrive on farm.

Unlike Ireland, calves from the dairy herd are available mostly all year round in David’s locality – with few farmers operating tight, block-calving systems and this continuous supply of calves is welcomed, as this is David’s most profitable enterprise.

He outlined that Friesian bull calf prices in the UK are extremely low at present, with the exception of top-quality, reared, British Friesian calves commanding a price in the region of £100/head.

In relation to Jersey influence, he said that this breed is not that common, with most farmers leaning towards Friesian and using beef genetics, such as Belgian Blue and Aberdeen Angus.

He also noted that there are less calves available in the mart, with more and more calves going into programmes such as ‘Blade’ and Buitelaar.

In recent years, David has turned to finishing his own cattle; this is completely separate from the Blade Farming system. 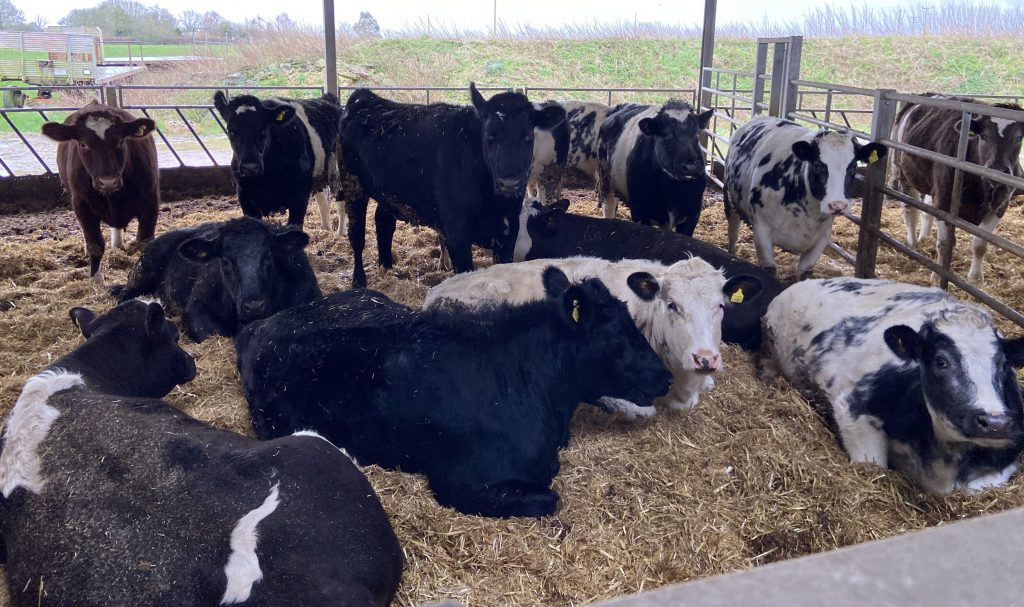 Perhaps the most interesting and somewhat unusual shed in the yard is David’s ‘Roundhouse’ (pictured in the featured/main image accompanying this article), where a number of cattle are undergoing a finishing period.

“It’s a different approach. There is plenty of feed space and we have the cattle handling unit inside, and – to be honest – we like a gimmick,” he joked.

Stay tuned to AgriLand for more coverage from the UK tour…