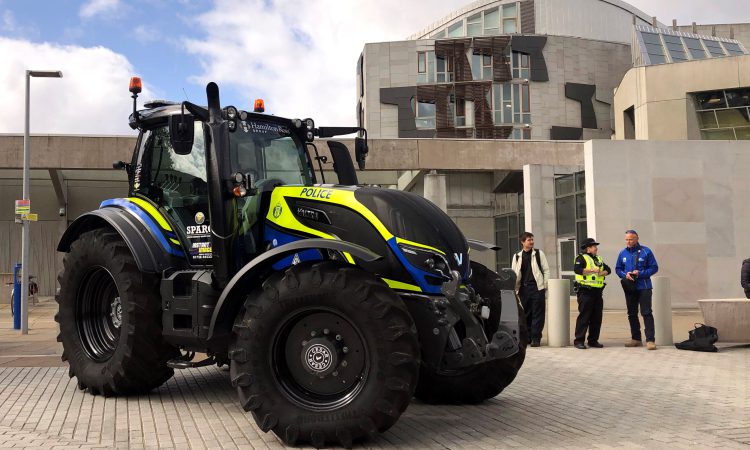 The Scottish Partnership Against Rural Crime (SPARC) tractor tour ends on a high with a reception at Holyrood, the home of the Scottish Parliament.

MSPs including the Cabinet Secretary for Rural Economy, Fergus Ewing, and the Minister for Rural Affairs and the Natural Environment, Mairi Gougeon, joined SPARC members and Hamilton Ross Group staff for a photo outside Holyrood with the tractor and Police horses to celebrate the end of a successful tour.

The Valtra T174EA SPARC-branded tractor, which has been supplied by Hamilton Ross Group in partnership with SPARC, has toured over 40 agricultural shows and events this summer to raise awareness of the blight against rural crime and open discussion with the public and those within the agricultural industry.

Rural and remote areas continue to be targeted by opportunist and organised criminals and the tour has encouraged those living, working and visiting rural communities to take precautions and protect their property whilst reporting any suspicious activity. 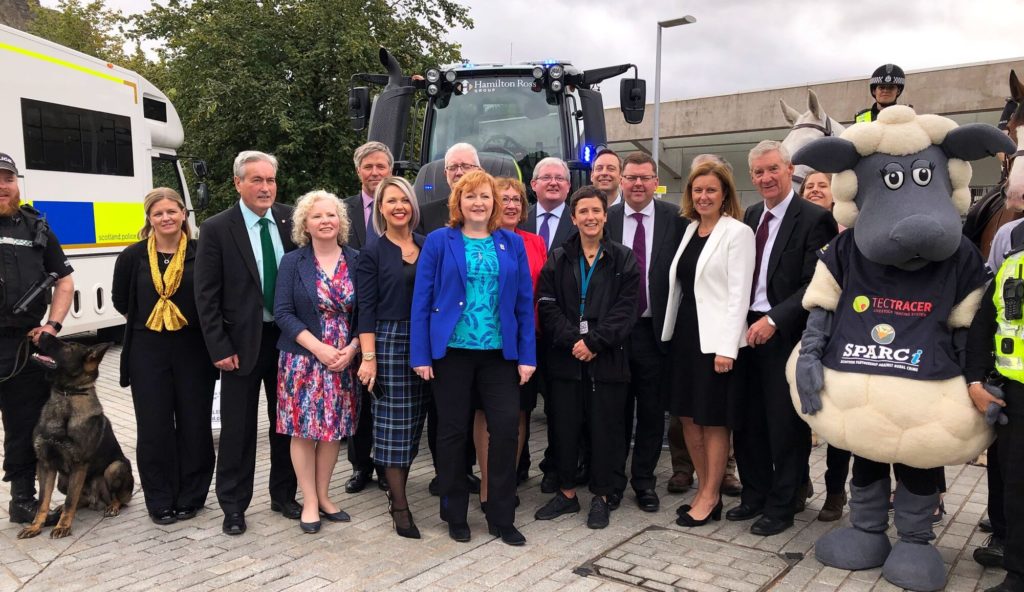 SPARC is made up of 16 strategic partners from across the rural community and seeks to combat rural crime, such as livestock offences, fly-tipping, heritage crime, equestrian incidents, fuel theft, poaching and theft of agricultural vehicles, forestry machinery and quads bikes.

Alan Dron, rural crime co-ordinator for SPARC, said: “As rural crime occurs throughout Scotland and recognises no boundaries, the Scottish Partnership Against Rural Crime (SPARC) was keen to create a visible presence in as many areas of Scotland as possible.

“Through the vision and support provided by Valtra and The Hamilton Ross Group, SPARC launched this initiative in April and, since then, have attended agricultural events and shows in all 13 policing divisions plus 23 Local Authority areas.

All SPARC members have been delighted by the positive engagement and response from rural communities, which in turn will result in greater consistency and resilience on how rural crime can be reduced and tackled.

Eric Gardiner, managing director of the Hamilton Ross Group, said: “We are thrilled with the response to our partnership with SPARC from both customers and others within the industry.

“The project has been a complete success in terms of raising awareness of rural crime prevention and the role that dealers like the Hamilton Ross Group can play in terms of supporting customers through fitting security and tracking devices to their machinery.”