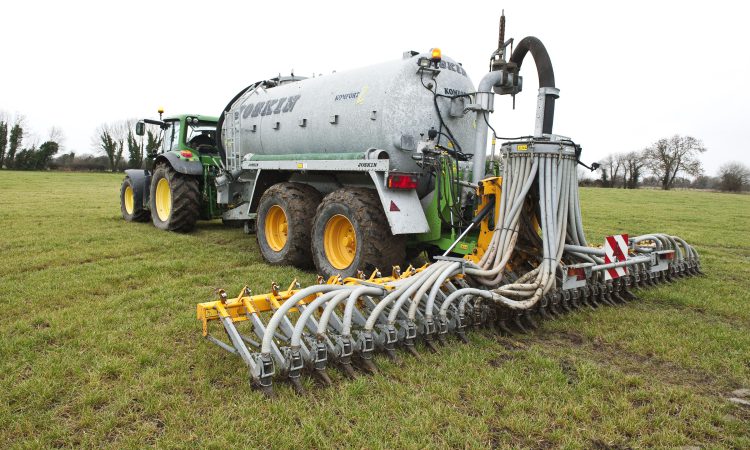 The fact that soil carbon sequestration levels in grassland have kept on rising 50 years into a bespoke slurry spreading trial at Agri-food and Biosciences Institute (AFBI) Hillsborough, is worthy of note in its own right.

However, the fact that this result is counter–intuitive with respect to the outcome scientists might have expected from the work, is equally worthy of comment.

The man in charge of the project is Dr. Jonathan Holland.

“The fact that sequestration levels have not started to plateau-off is extremely significant,” he told Agriland.

From a soil type point of view, the site chosen for the trial is representative of general farming conditions, as clay loam soils are very common throughout Northern Ireland.

“Many research scientists might well have held the view that soil carbon sequestration levels would have fallen back by this stage,” he continued.

“So the question that we are now trying to answer is a very simple one – why is this not the case?”

According to the AFBI scientist, the trial was initially established in 1971 to assess the production impact of slurry applications within a three-cut silage system.

He commented: “A decade or so into the project, the emphasis changed to that of assessing the soil impact of heavy metals found in slurry.

“However, over recent years the focus has been very much on the carbon sequestration levels accrued on the back of pig and cattle slurry that has been applied three times annually.”

The trial comprises control plots, receiving no slurry or fertiliser at all; plots receiving artificial nitroen (N), phosphorus (P) and potash (K) commensurate with the needs of a grass silage crop; and a series of plots receiving three different slurry application rates: 4,450 gallons/ac; 8,900 gallons/ac and 17, 800 gallons/ac.

“The slurry is applied in March, May and July. No slurry is put out onto the plots after the final cut of silage has been taken,” Holland confirmed.

I am aware of the growing reticence concerning the mid-summer application of slurry on environmental grounds.

“It has been the tradition from the get-go to put slurry out after second cut. Given current circumstances, however, we might change this approach moving forward.”

Every farm is unique

Despite the significance of the results generated by the slurry trial, Holland is extremely hesitant at drawing down general conclusions that would apply across a broad sweep of farming conditions.

He commented: “Each farm is different. However, the trial is pointing to the significant sequestration potential that exists on grassland farms in this part of the world.”

Regular soil testing of the trial plots is also pointing to the potential buffering capacity of slurry from a soil pH point of view.

There is evidence to indicate that the plots receiving slurry only require considerably lower levels of lime to retain a prescribed pH level. But this is far from proven fact and much more analysis of the soil testing results that we have amassed over the years, will be required to verify this trend,” Holland continued.

“A number of the plots were switched to multi-species swards two years ago. The mixture sown out included plantain and chicory. It will be interesting to gauge how this amendment to the trial impacts on soil carbon sequestration levels during the period ahead,” he concluded.