Home » N.Ireland » Some like them Blonde: Behind the scenes at NI’s top Blonde herds

Some like them Blonde: Behind the scenes at NI’s top Blonde herds 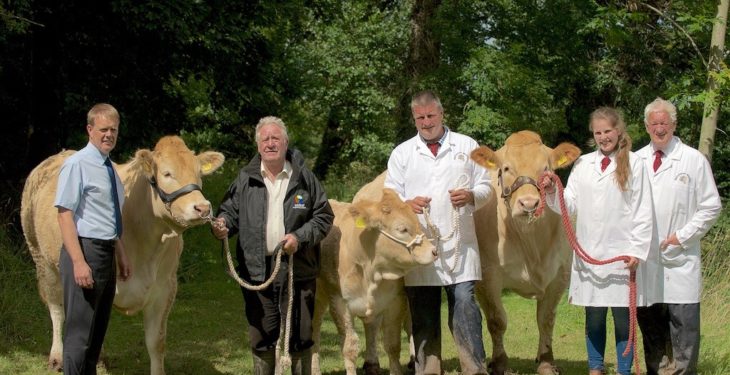 Two herds in Co. Down and Co. Antrim have come out top at this year’s NI Blonde Cattle Club herd competition.

Large herd winner Henry Griffin farms in Toomebridge on the shores of Lough Neigh; a low-lying area which suffered in the recent floods.

He runs his herd Drumraymond Blondes alongside his son Stephen and daughter Angela.

Griffin told AgriLand he bred low-maintenance cattle as both he and his son have other jobs off the farm.

“Easy-calving is very important because my son and I both work off the farm – I’m an electrician and he’s a gas technician,” he said.

The bulls bred by the herd have proved very popular with commercial beef breeders but have also done well in the show-ring.

Drumraymond won the Junior Champion at the Pedigree Calf Fair in November. Griffin went on to take the winning bull to Carlisle in May winning the Overall Champion and achieving the top price of 5,500gns.

Griffin’s herd has also won Reserve Champion at Balmoral many times, but it’s a big ambition of his to win the breed championship.

Meanwhile, the small herd section was won by Ballygowan Blondes owned by David Gibson from Co. Down.

Gibson farms alongside his father, Robert, who was one of the first three Blonde breeders in Northern Ireland first importing Blondes in 1969.

The pair run around 10 spring-calving heifers and up to 35 sucklers with followers and bulls on their 40-acre farm close to Ballygowan, Co. Down.

Gibson also works away from home on the North Sea oil-rigs so low-maintenance is an important aspect of the family’s system.

The pair run a grassland-based system, maximising calf growth and lactating cow condition from good management of the pasture.

Heifers are AI-ed either with Wagyu or Speckle Park – a Canadian breed – for ease of calving, and an easy introduction to motherhood,” Dave Gibson said.

The Wagyu-cross are butchered and sold as box beef and the Speckle Park females used as embryo recipients.

He said: “We have a strict culling policy selecting calves that do not meet my specifications as they come off the cow – they are sold at Saintfield Mart – it reduces workload during the winter.

“The herd is in high health; accredited free of BVD, IBR, Lepto and Johne’s. However, we vaccinate for BVD and IBR as they are both viruses and could be picked up at a one-day show.”

The 2017 competition was sponsored by Gormley Motors of Dungannon and judged by Dessie Greene of the Scauchmolin Herd in Co. Wexford.

Greene was also on the lookout for individual animals to award Best Cow and Calf, Best Stock Bull and Best Senior Heifer.

The Northern Ireland Blonde Club extended its congratulations to all prize winners afterwards.

A spokesman said: “The geographical spread is an indicator of the quality of Blonde cattle available throughout Northern Ireland.

“Sincere thanks to competition sponsor Gormley Motors, Judge Dessie Greene, and to Bo Davidson for photographing all the winning stock. Keep up to date with club activities, including the Pedigree Calf Fair on November 18 and the club’s AGM on November 24, on the ‘NI Blonde Cattle Club’ Facebook page.”

Prizes for the competition will be presented at the club’s Annual Dinner Dance on October 21 in Corick House, Clogher.