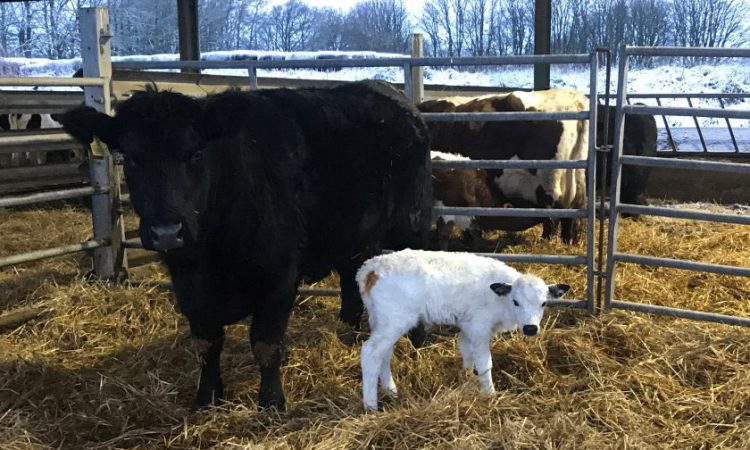 The birth of a female Vaynol calf through the first-ever successful embryo transfer for a semi-feral breed of cattle has brought new hope in the work to save one of the UK’s rarest native livestock breeds.

The calf, which is called Snow – was born close to Edinburgh on January 6, as the result of a conservation project delivered by Rare Breeds Survival Trust (RBST) and animal breeding specialists AB Europe.

The calf’s birth is an important step in saving the genetic line of a rare Vaynol cow, which had struggled to reproduce.

Vaynol embryos were implanted in recipient Angus cows. However, it’s not the first time embryo transfer has been used for a rare breed.

The method, which is mostly used commercially with pedigree beef and dairy cattle, has been used previously for the conservation of rare Gloucester cattle.

RBST chief executive Christopher Price said: “Snow’s birth really is momentous for the Vaynol breed, which is among our very rarest native cattle.

“Vaynols are wonderful primitive animals but supporting their survival is particularly challenging due to their semi-feral nature and modest fertility.

They are an irreplaceable part of the UK’s heritage but the survival of the breed is also important in terms of the genetic diversity of cattle in the UK and guarding against future animal diseases.

“We hope that the success of this project can open a crucial new avenue for the survival of the Vaynol breed, and also pave the way for embryo implant work to provide a vital boost to other rare breeds too.”

How rare are Vaynol cattle?

Descended from Britain’s ancient white herds of parkland cattle and established at Vaynol Park near Bangor in 1872, the Vaynol breed is one of just two native feral or semi-feral breeds in the UK, along with Chillingham Wild Cattle.

With eight breeding females registered in 2019 and just three in 2018, the Vaynol is one of only five cattle breeds given ‘critical’ status on the RBST Watchlist.

When a breed’s population is so low, the birth of new females is vitally important to guard against inbreeding and to allow the creation of new herds.

Vaynol prospects have improved since the 1980s when there was just one herd remaining, but there are still only five herds and the breed needs significant support to ensure its survival.

AB Europe veterinary surgeon Gavin Tait said: “We were very pleased to support this important conservation work and ensure that a precious Vaynol bloodline is not lost.

Persistence paid off with the birth of Snow following several previous implant efforts which failed to hold. Snow was born on a -6ºC January night, we gave her extra colostrum and kept checking her, but she did very well and continues to thrive.”

The birth of a second calf from the same RBST and AB Europe embryo transfer project is expected this summer.

RBST works across the UK to save and safeguard rare and native livestock and equine breeds.

The charity’s collaboration with AB Europe is part of RBST’s wider programme to support the future of the Vaynol breed, which includes collection of genetic materials and establishing new herds

The RBST is the sole charity dedicated to promoting and preserving the UKs rare and native breeds of farm livestock.

Started in 1973, RBST monitors numbers of animals, and threats of inbreeding and geographical concentration. It promotes the breeding and registration of rare and native breeds.

Through its 4,500 members, staff and support groups it provides a network of knowledge to support and encourage breeders to reduce these threats.