Home » Machinery » Just what tyre do you fit to a tractor of this stature?

Just what tyre do you fit to a tractor of this stature? 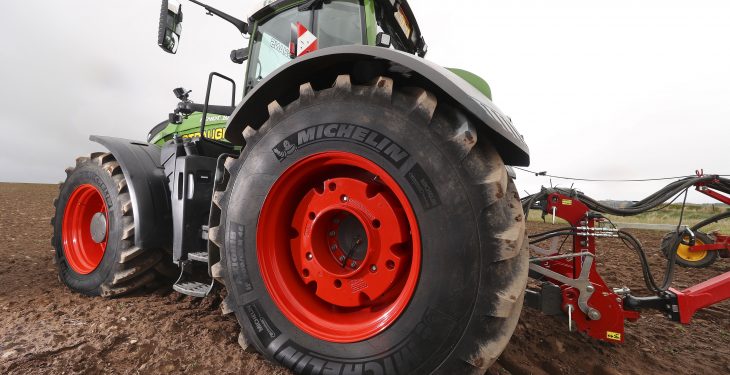 Staughan, based in Northumbria, England, had the tyres fitted to its new top-of-the-range Fendt 1050 Vario, which is reportedly the biggest (non-articulated) wheeled agricultural tractor working in that region.

The tyres measure a staggering 2.32m high and 0.9m wide; the AxioBib fitments give a per-tyre load capacity of 10.6t and are rated for an impressive maximum speed of 65kph.

They can work at pressures as low as 0.8 bar, allowing for the “biggest possible footprint without compacting the soil”, according to Michelin.

David Dickinson, the Operations Manager for Straughan, said he specified a machine with tyres rather than tracks due to recent advances in tyre technology. He claimed: “These new Michelin tyres are on a par for traction with the best track systems available – even on very wet days.

If you are doing a lot of road work, they are in a different league altogether when it comes to handling and ride comfort.

Other notable features in the design include deep lugs and a wide tread to reduce wheel slip and to assist in “fully utilising” the tractor’s power.

Michelin claims that the reinforced bead construction assists in absorbing high forces, while keeping the tyre fixed on the rim and allowing the tractor to transmit all its engine torque – without causing undue damage the soil.

The better traction, says the firm, allows farmers to save on both time and fuel, increasing overall efficiency.

Other examples of tractors compatible with the biggest Axiobib tyres are the Deutz Fahr 11 Series and pivot-steer New Holland T9 range. 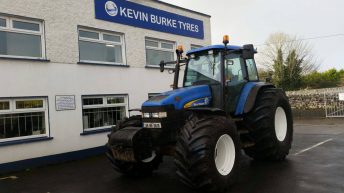