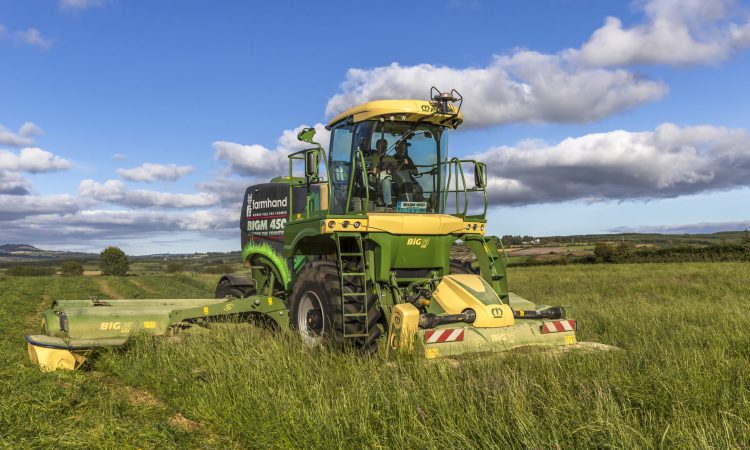 The BiG M remains unique in the world of agricultural machinery. It is the world’s only mass-produced, self-propelled mower, and has been for 25 years.

During that time little has changed. The concept remains the same – three mower units powered by a central engine mounted on a machine, that is designed to carry out just one job, and that is to cut grass as rapidly as possible.

The machine was launched in 1996 after a relatively short gestation. In charge of its development was Dr. Josef Horstmann, who spoke to Agriland about the project.

The original concept was in response to the restriction placed on the mowing operation by the power available at the time.

Back in the 90s, the most powerful tractors on farms were rarely more than 180-200hp in size, which limited the output to a 6m cut. The rule of thumb generally used is that 100hp is required to cut 3m.

The ambition of Krone was to create a machine that could cut a 9m swath while retaining manoeuvrability and keeping ahead of ever more powerful forage harvesters.

The company, established in 1897, had long experience of manufacturing agricultural implements, but designing and manufacturing a powered unit of any type was a big step into the unknown for both the management and the development engineers.

The then management had taken some convincing, recalls Dr. Horstmann, but they eventually gave a green light to the project and so, the BiG M was born.

It was expected that the new machine would sell to the large open farmers of continental Europe, but the exact opposite turned out to be the case.

A whole new team of engineers was formed who chose John Deere to supply both the engine and the cab.

At first, the reception from farmers and contractors was a little cool. It was considered too big and ungainly for European conditions, but live demonstrations soon convinced the sceptics otherwise.

In Ireland it became especially popular where it accounts for 20% of total sales.

It was not totally without its problems; the cutter bars were prone to vibrations and it struggled in stony conditions.

Indeed, such was the need to solve the latter that Krone developed its ‘Safe Cut’ system in response to this issue.

This is a mechanism by which the disc is disengaged from the drive and rises up to avoid the blades on either side. It is now fitted to mowers throughout the Krone range and is just one example of how the BiG M has influenced the engineering development of the company as a whole.

The BiG M is still relevant

No-one can doubt the success of the machine. It was a bold step at the time but one which has been entirely vindicated.

Despite that, the market for self-propelled mowers remains small, and it is now increasingly facing competition from tractors of 300hp or more, fitted with demountable triple mowers.

Tractor size may be increasing, but the fundamental justifications for purchasing and operating a BiG M are still valid today Dr. Horstmann believes.

His philosophy remains today as it did 25 years ago, and that it is ‘the right machine at the right time’.

By this he means that a specialist machine is ready to go exactly when it is wanted, there is no time wasted in mounting mowers or setting up a triple combination, it just works straight from the shed.

The fact that it sells so well in Ireland suggests that it is the right tool for many contractors when faced with a large area to cut, divided between many small fields.

For the size of cut it provides, it is agile, compact and maneuverable – attributes which increase its overall work rate he believes, and has led to its adoption where mowing can be a challenging operation.