The Irish border: ‘An inconvenient truth in London?’ 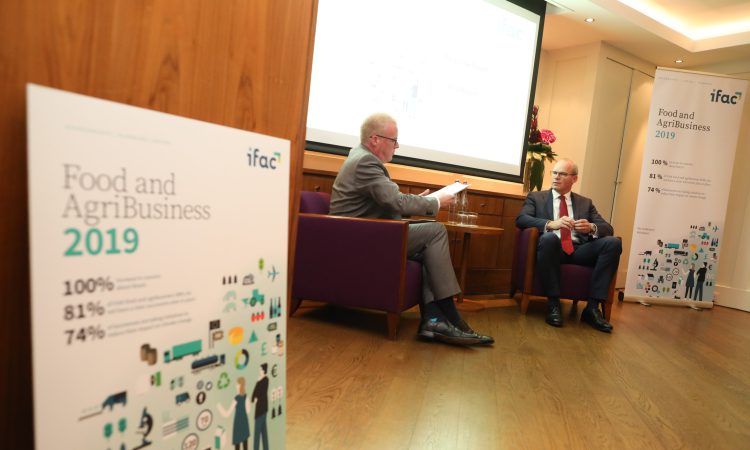 The Irish Government will be transparent and truthful on the border issue – that is an inconvenient truth in London – it is the problem that simply has to be solved if Ireland is going to support an agreement; the EU is absolutely with Ireland on that.

If Ireland is forced – because there is no deal – to find a way of putting checks somewhere away from the border, but in a way that is comprehensive enough to protect the integrity of the single market to prevent Irish goods being checked as they enter France and Belgium and Spain, and elsewhere in the single market, Ireland will regard that as a temporary and very disruptive arrangement.

This is according to Tánaiste and Minister for Foreign Affairs and Trade Simon Coveney who spoke about the border issue in the run-up to the Brexit deadline of October 31 next during an IFAC event in Dublin yesterday, September 10.

Coveney attended the launch of IFAC’s ‘Food and AgriBusiness 2019’ report which suggests that as a result of Brexit and climate change, trade deals and changing consumer behaviour, Irish food and agri-business owners have “much to contend with” and that outside of dairying many customers of agri-businesses who trade predominately “are under pressure”.

The minister, meanwhile, pointed to the complications that are still very much to the fore in relation to the border.

He lays the blame for the current impasse firmly at the door of the UK government.

While we continue to advocate for the same issues – citizen’s rights issues, financial settlement and the Irish border – they are the three issues that will get resolved in a withdrawal agreement.

“And they are still the issues that need to be resolved before a formal trade discussion will open up with the UK, and after a no deal.

“Long before the withdrawal agreement was drafted or agreed, we got an agreement from the British government that if there wasn’t a political solution agreed in terms of future trade that solved the border issue comprehensively, then the default position would be that they would maintain residency along with the rules of the customs union and single market – in the areas necessary to protect the all-island economy now and in the future.

“Also, in that text, we got absolute guarantees around no border infrastructure and no related checks or controls.”

‘Heading for a no deal’

Meanwhile, he says that all of that changed recently when Prime Minister Johnson wrote to Donald Tusk [president of the European Council] and said, “not only are we looking to no longer comply with that, we are also looking to diverge away from the EU from a regulatory perspective because Britain wants to do its own thing”.

Essentially, what he said was ‘we want to remove the solution to the border question in Ireland and we are going to make the problem that needs to be solved an awful lot bigger’.

Coveney continued: “Our thoughts on that is – if that is the approach, then we are heading for a no deal, and the EU responded the same way.

“Since then the Irish Government has made it very clear that, actually, because of the new approach to the future relationship that the UK is looking for – which is a bare-bones trade agreement they seem to be asking for, we are saying that more than ever now the backstop is required as a guarantee.

Also Read: ‘Ireland is not going to allow an open backdoor into the EU single market’ – Coveney

“We don’t care whether its UK-wide or Northern Ireland specific – it has never been an unreasonable demand by us; the demand has always been that we have to solve the problem – which is a technical, regulatory, complex problem.

“We cannot pretend that we have a solution here in order to solve a political problem and then in a few months’ time have to come back to people and say ‘well actually, this is not quite as we explained it’.

Some people say to me – the position you are taking is so firm it is actually going to cause the problem that you are trying to prevent.

“My answer to that is that we will continue to maintain our position – that the only way to comprehensively deal with the Irish border question is through regulatory alignment – even in a no-deal scenario.

“And the EU will back us on that.”