In 2017, European arable (tillage) equipment markets “recovered from the slump of the previous year and developed positively”.

That’s according to CEMA – an umbrella body representing the agricultural machinery manufacturing industry across Europe.

It says that the downward trend of the preceding four years ended, particularly for seeding, fertilising and plant protection equipment. And, following a “weak trend” in 2016, the soil working equipment segment apparently attained the level of the previous three years.

According to preliminary calculations, the 2017 market volume amounted to approximately €3.34 billion – thus achieving a 10% increase over the previous year. Thanks to “well-filled order books”, a further upward trend is expected for the current year, at least for the first six months.

“It continues to be the eastern European region that exhibits a high demand for soil working equipment, as well as seed drills, fertiliser spreaders and plant protection equipment,” explained Nina Janssen, coordinator of the three CEMA ‘Product Groups’ which, at the invitation of Sulky-Burel, met in March at Chateaubourg (France).

At the European level, the growing markets in Romania and Ukraine and – not least – the market recovery in Poland, compensated for the continuing weak market in France.

Kockerling and Kerner were welcomed as new group members (in the soil working equipment and seed drill segments).

Attending his first ‘Product Group’ session, new CEMA secretary general Jerome Bandry said: “I welcome this opportunity to become more familiar with the markets for arable equipment and assess key trends with its participants – on the basis of dedicated statistics and within a strict compliance framework.”

The CEMA ‘Product Groups’ are comprised of “leading” European manufacturers of tractors, combine harvesters, tillage equipment and machinery for harvesting hay and forage.

The primary emphasis is on a “shared assessment” of the market, based on CEMA’s own statistics. At present, 24 companies from nine European countries are members of the CEMA ‘Product Groups’ in the area of arable farming. 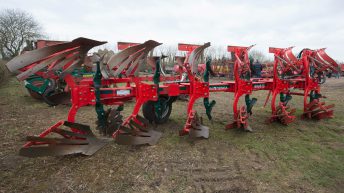