Home » Machinery » Top ‘drawer’ tractors? Silage from the eras at ‘Mogeely’ day out

Top ‘drawer’ tractors? Silage from the eras at ‘Mogeely’ day out 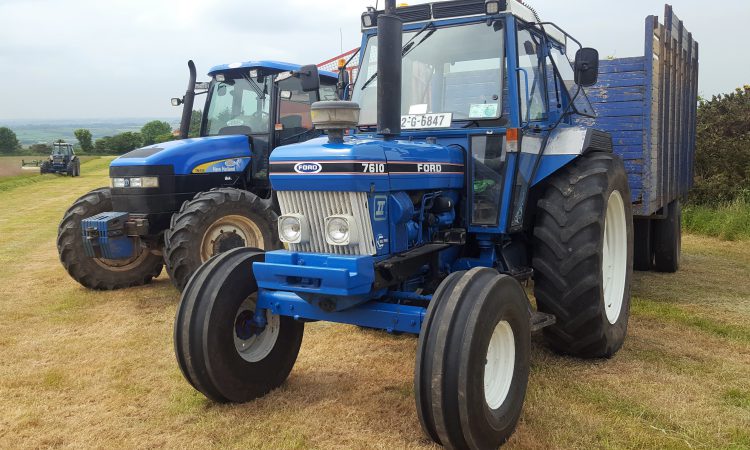 Members of Mogeely Vintage Club gathered on Sunday (June 10) to put a barrage of classic tractors and machines through their paces.

The venue was a farm outside Clashmore – in a scenic part of west Co. Waterford.

We’ve already brought you a Fiat (Fiatagri) themed report from this event; here’s the ‘best of blue‘ – and there’s certainly plenty to please the eye.

Also Read: ‘Frenzy’ of Fiats out in force at Waterford ‘working day’

Here, we unashamedly avail of the opportunity to pay homage to Ford – and to the 7610 in particular. An especially tidy specimen (pictured below) was present on the day; it’s owned by Brian Cronin from Killeagh (Co. Cork). 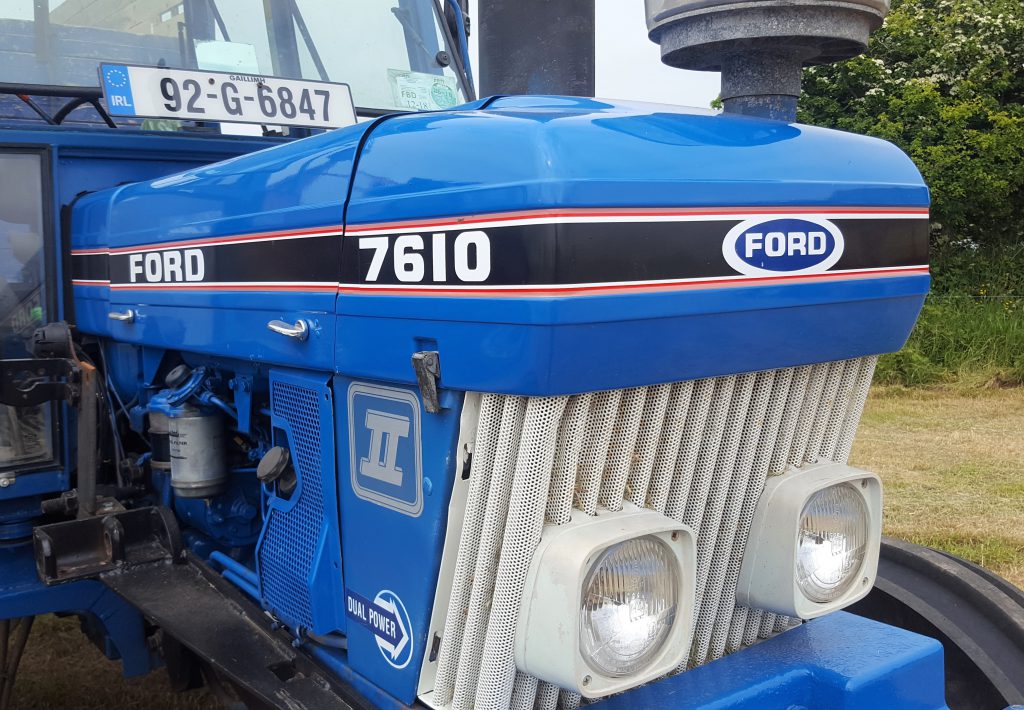 It’s shown here (below) alongside a much newer (but also ‘blue’) New Holland TM155 (owned by James Condon from Ballintotis, Co. Cork).

Here, we have two popular tractors (default choices for drawing silage for many contractors – each in its own era) side-by-side. 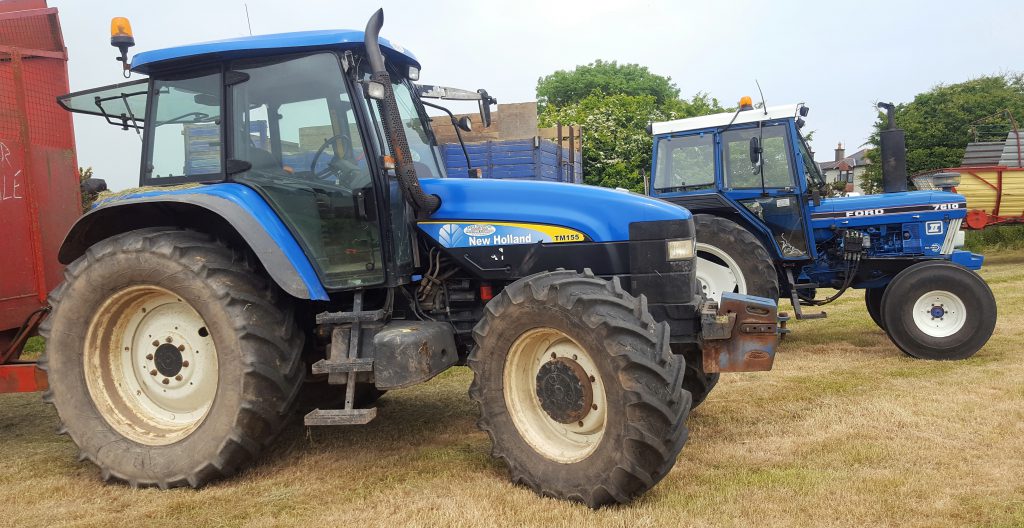 Alas, driver accommodation was decidedly more basic back then; this picture (below) puts you behind the wheel of the aforementioned Series 10 workhorse. Depending on your age, you might well have spent time gazing out over one of these bonnets. 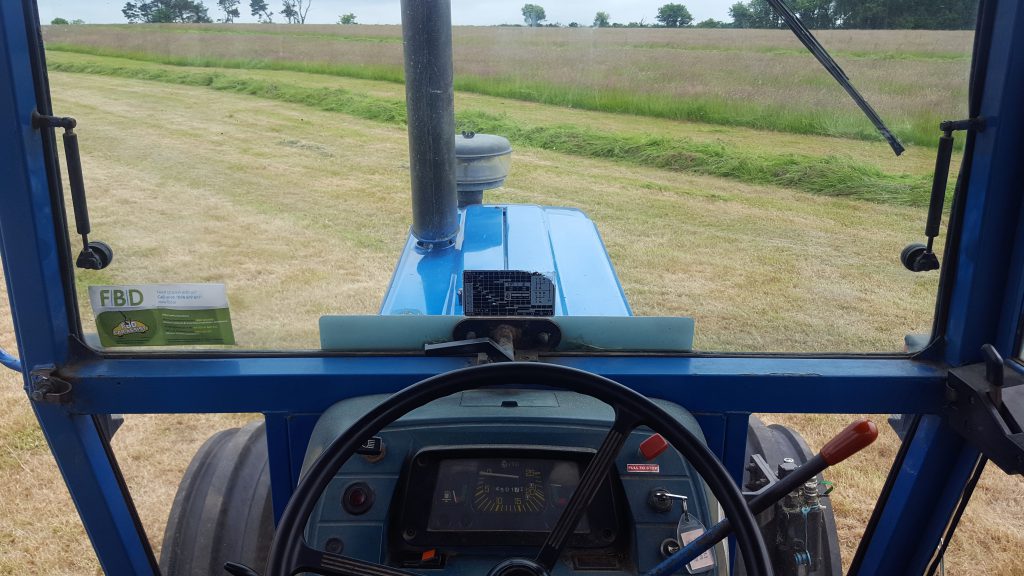 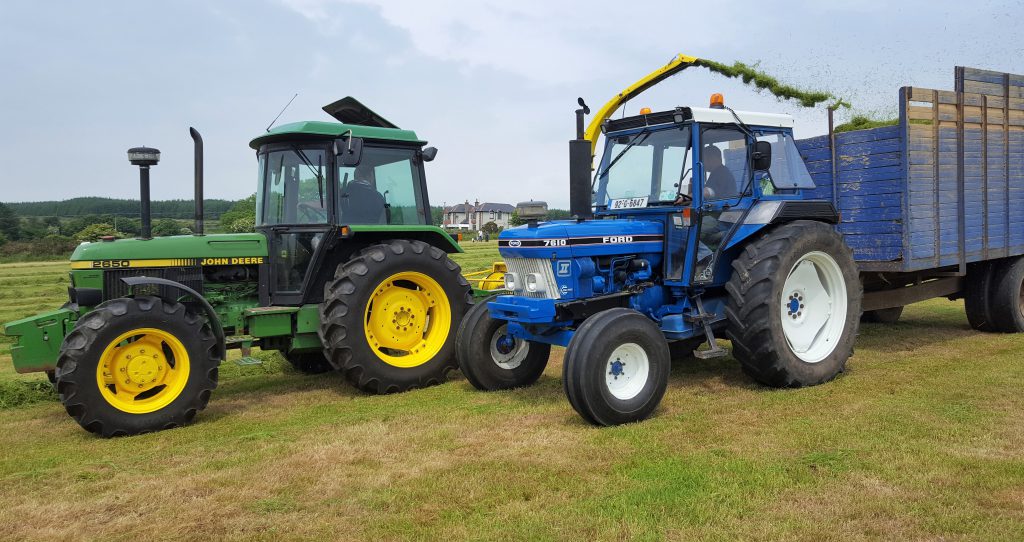 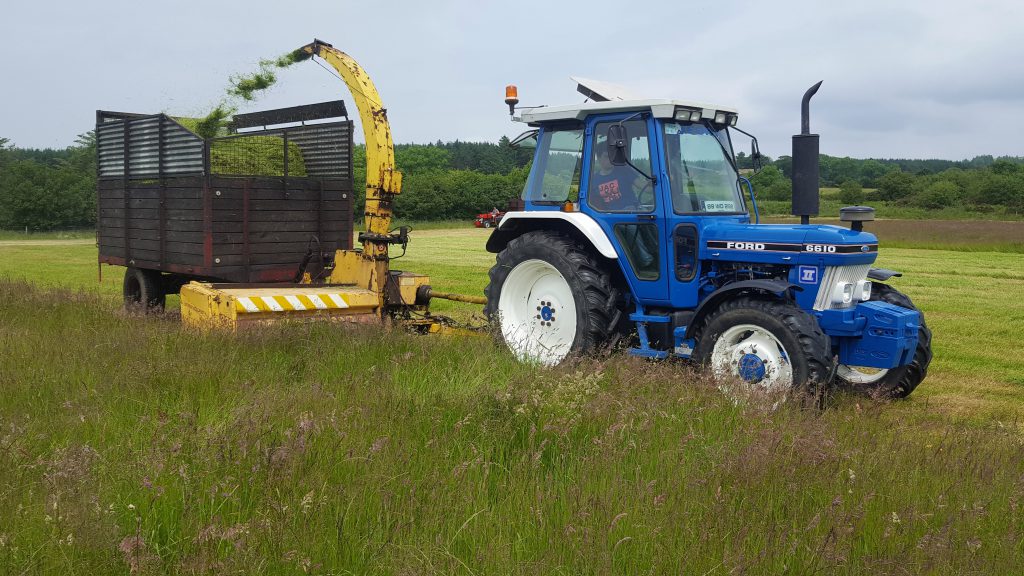 This tractor, along with the New Holland 339 double-chop harvester and 10t Lee trailer, is owned by local man Kevin McGrath – from Clashmore. By today’s standards, this man is achieving a lot with each run down the field (albeit with no scope for wilting!). 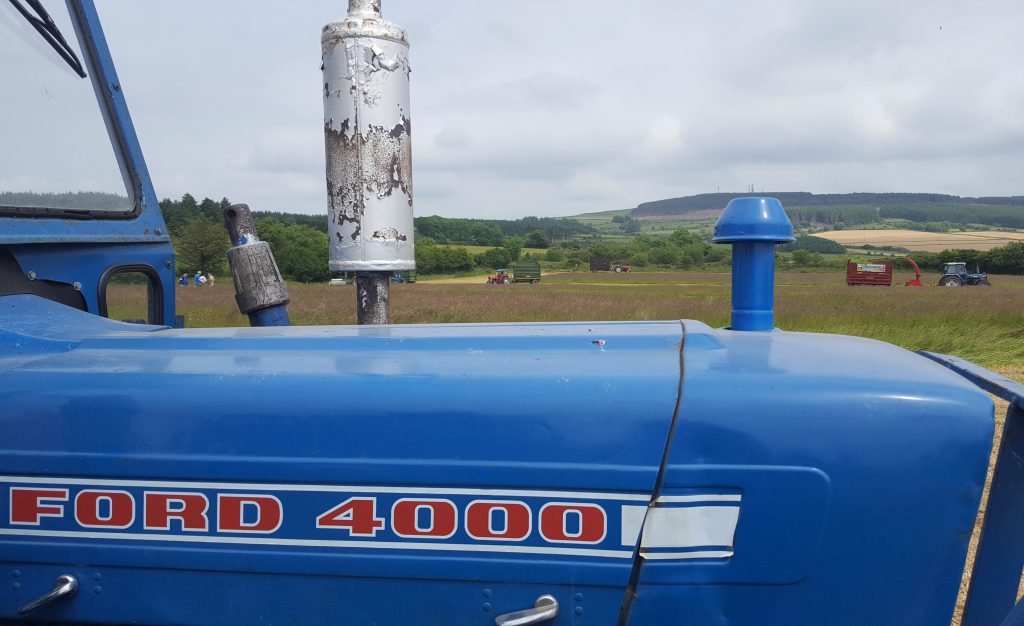 Hauling silage about were a Ford 4000 (owned by Derek Burke from Lisgoold) and a County 1164 (owned by Kieran O’Donoghue from Mitchelstown) – both of which are pictured below. 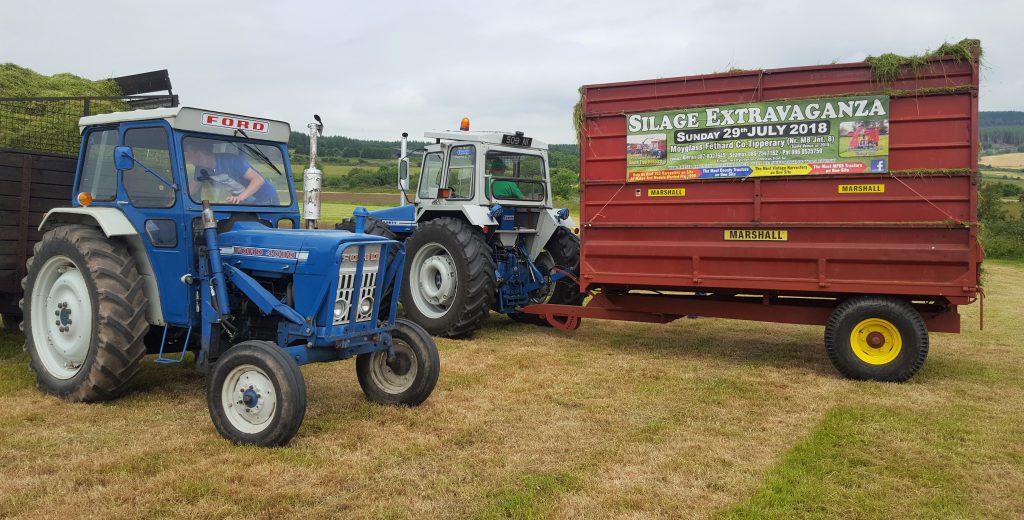 Another County 1164 (owned by Jim Harte from Midleton) was gainfully employed on a Krone 2700 silage wagon; it also side-filled from several of the precision-chop harvesters on-site.

This 7600 (pictured below) was busy on a 10t Lee trailer; it’s owned by John Dolphin from Midleton (Co. Cork). 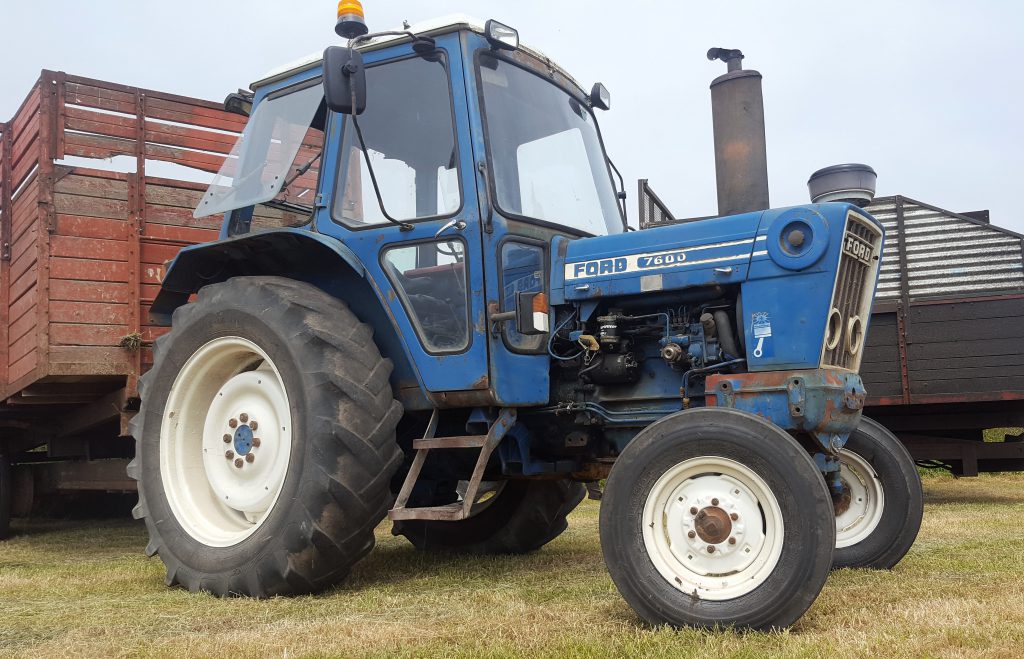 John also brought his Fordson Super Major – a tractor that harks back to the 1960s. It was built in Dagenham (England) and was considered a ‘big’ tractor in its day. 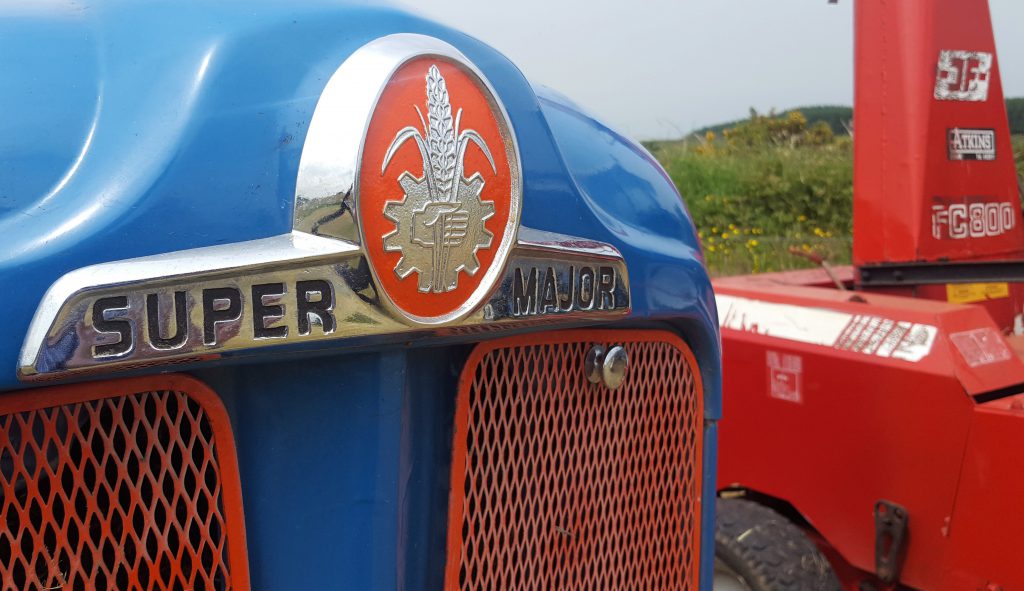 The Super Major was put to good use. For much of the proceedings it was paired off with a Ford 8210 – itself coupled to a side-mounted JF FC800 harvester (pictured below). 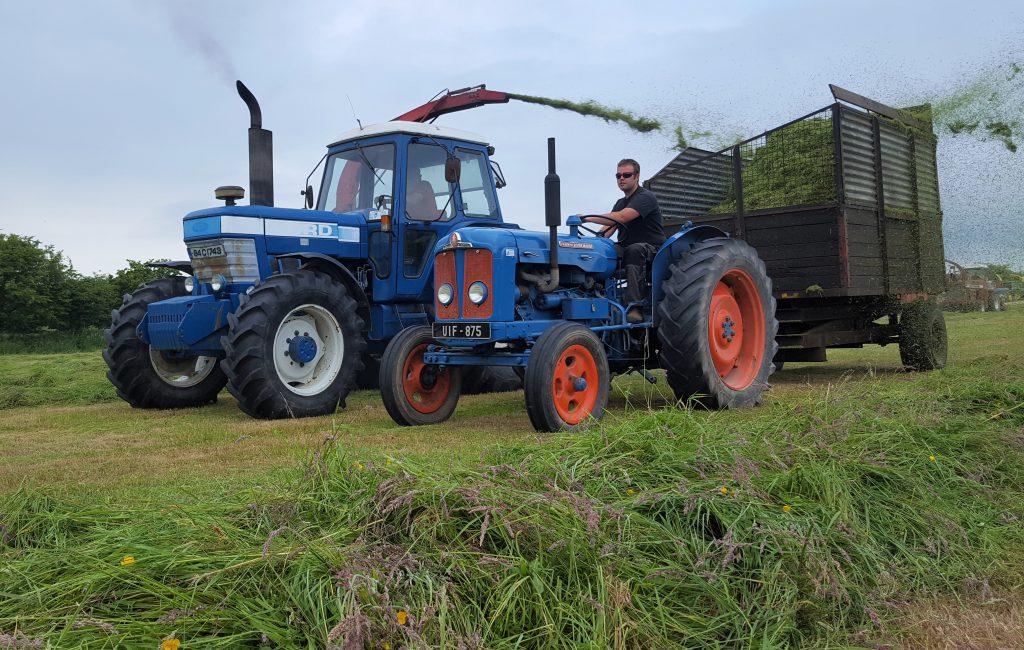 The 8210, along with the accompanying JF, is owned by Shane Beausang from Ballymacoda (Co. Cork). The harvester – a precision-chop machine – is shown in greater detail in this shot (below). 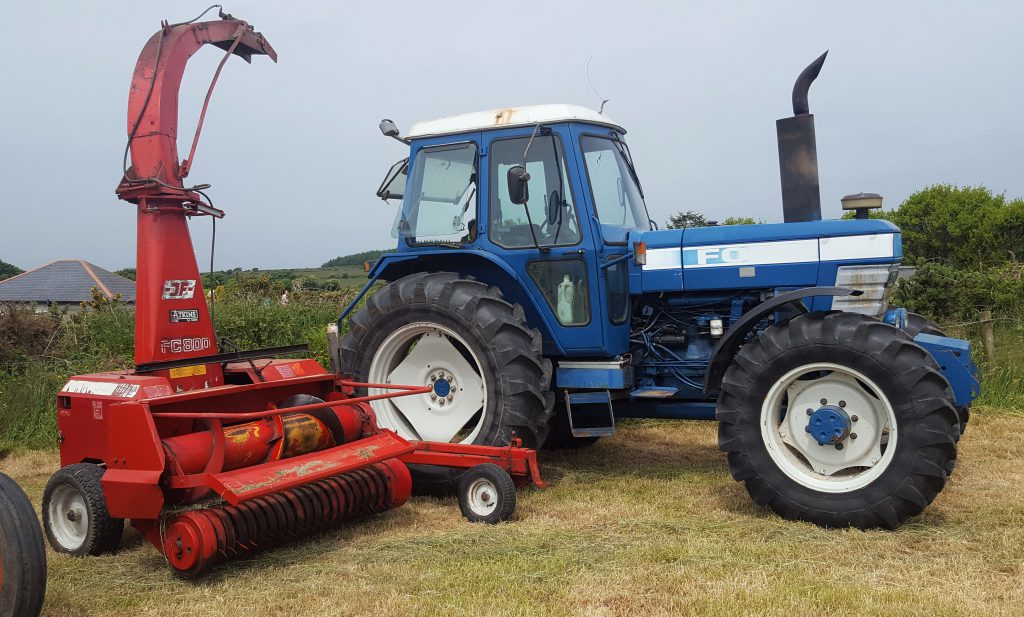 Commenting on the event, Tony Cotter – secretary of Mogeely Vintage Club – said: “Thanks to all involved.

“We had members of a number of different clubs taking part; we had people from Ballinrostig Vintage Club, Carrigtwohill Vintage Club, Mellary Vintage Club and Coolmoyne and Moyglass Vintage Club, as well as some Youghal members.”