Ammonia levels in Northern Ireland have come under scrutiny at UK level in a draft Government report which is out on consultation until August.

The report - which is titled 'Air quality: Draft Clean Air Strategy 2018' - lays bare the full extent of the region's pollution woes, comparing 2005 levels of each of the main air pollutants with 2015 measurements.

Over the 10-year span, Northern Ireland was the only region to see an increase in any of the pollutants covered.

The report focuses on:

For the first time, it sees the UK Government make clear it will clamp down on ammonia from farming – which is responsible for 88% of ammonia emissions – by requiring farmers to invest in the infrastructure and equipment to reduce emissions.

Sulphur dioxide saw the biggest drop across all the regions - including Northern Ireland.

However, ammonia bucked the trend, as the only part of the UK to see an increase in levels since 2005.

The rise was mainly put down to an increase in livestock numbers - despite the fact that the same report admits that cattle numbers have actually dropped since 2005.

It also mentions the widespread use of volatile organic compounds used in many everyday cleaning products as a contributing factor.

"A large proportion of ammonia emissions [in Northern Ireland] come from manure management and manure applied to soils," it read.

Emissions of ammonia in Northern Ireland have increased by 5% since 2005. 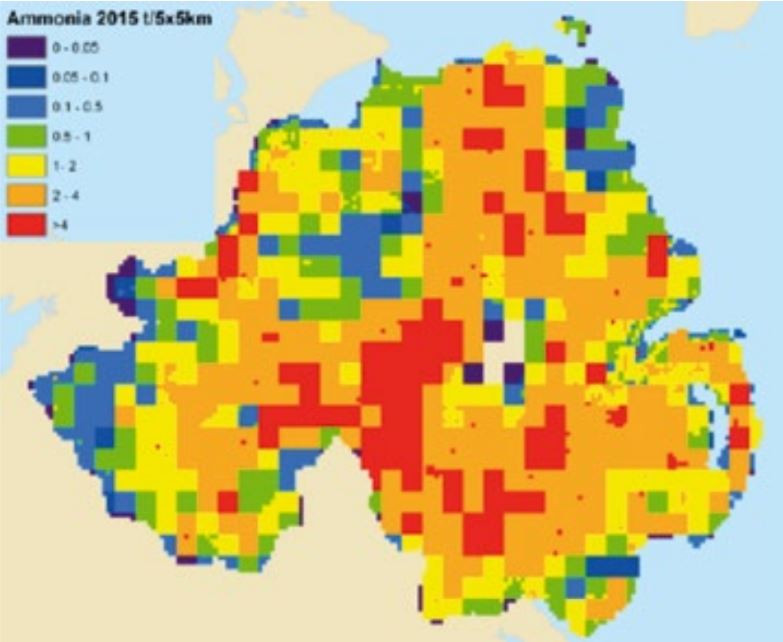 The report added that the findings reflect the "nature of land use in Northern Ireland", and the relative importance of the agricultural sector.