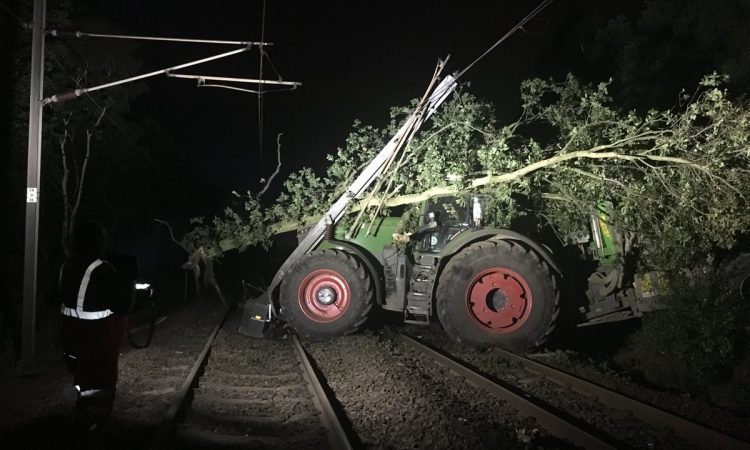 A tractor crashed onto a rail line in the UK last night, causing a major disruption to services, according to the National Rail.

The incident occurred on the route going cross country between Leeds and Reading/Plymouth and between Glasgow Central and Birmingham New Street, the transport service said.

Taking place at approximately 9:10pm last night, the Fendt tractor involved in the incident burst onto the track, taking out a tree and damaging both the tracks and overhead electricity wires.

It is understood that the accident happened near Fitzwilliam, located in west Yorkshire, England.

In a tweet posted from the company’s Twitter account, National Rail said: “Damage to the railway infrastructure including the tracks and overhead electric wires caused by a tractor in the Fitzwilliam area has resulted in all lines being blocked.”

It is not known how the driver lost control of the tractor.

Network Rail, the fire service and a specialist recovery service, removed the tractor from the line.

Network Rail is now undertaking repair work, with all lines expected to be open and trains able to run as normal from 6:00pm, the rail service said.

This is the second incident involving a tractor to occur in Yorkshire on the same day.

Earlier yesterday evening (Wednesday, August 15), a different tractor driver had a close call, losing a disc harrow on a main road while trying to evade a serious road collision with an oncoming car.

The driver had to swerve to avoid a car, causing the implement it was carrying to break away onto the road, blocking it in both directions, at about 4:10pm this afternoon.

The incident occurred near Wykeham, Yorkshire.

Police arrived within minutes, and managed traffic in the area while the driver arranged for a telescopic handler to attend the scene and clear the implement.

Thankfully, no one was injured in the incident and the road was clear by 4:45pm.