Trade focus: Charting an ‘independent’ path with a tightly-run ship

Few people have ever accused the machinery trade across the entirety of the 32 counties as being a bland, homogenous group – despite the efforts of some manufacturers to reduce them to just that.

Thankfully, there are still a good number of characters about – who build their business through a native intelligence and strength of personality.

Lloyd McCullagh of Bellanaleck, near Enniskillen, is certainly one such entrepreneur. He now stands out as running a very trim ship in the form of McCullagh Machinery.

It was in 1990 that he purchased the well-placed site from which he still runs the operation.

Situated on the A509 his yard can hardly be missed. Once inside, it is obvious that he is a dealer with standards; everything is parked neatly; all is clean and well kept.

This attention to detail extends to the preparation of the machinery that’s for sale. Used tractors have all been returned to “as close to their original condition as possible”; they also all come with the expected three-month warranty.

The guiding principle behind his success is to “buy in a good-quality tractor and improve upon it”.

Tractors are sourced from within the island of Ireland and Britain, although he is not always impressed by the condition of dealers’ premises across the water.

He also purchases tractors from private sellers and will have some idea of what to expect before he even sees the tractor in question.

“You know the condition the tractor will be in before you even get to their yard; the state of his [the seller’s] entrance and driveway will tell you that,” he explained.

New Holland, John Deere and Massey Ferguson are the three main tractor brands that Lloyd deals in, although nothing is off limits.

The age of a tractor is immaterial; it’s the condition it’s in that counts.

When buying stock he will look for the potential in a machine rather than be guided by a book price.

Once back at the workshop, a tractor is first given a thorough cleaning before it goes through a full check and service. Items that need replacing or repairing are attended to and, as the last stage in preparation, it passes through the paint-shop. There, any scratches, dents or other scars are sorted out before it emerges – ready for sale.

Having gotten to the forecourt Lloyd is keen to point out that he does not need to actually sell a tractor; the machine should sell itself.

“If you need to find reasons to want a tractor then it’s not the one for you,” he noted. Instead, he believes that “a machine should attract you when you first see it” and, in that case, there is scarcely a need for a salesman to be involved at all.

No doubt there are others in the trade who might not see it this way, but such an approach has hardly done him any harm. He now employs a staff of 15 and has a constant stream of visitors to the premises.

Last year saw the opening of a large, open-fronted display area, which is intended to keep some of the machinery dry for display – whatever the weather. Open yards are the norm in the machinery trade but Lloyd has taken the step of providing shelter from the elements for some of his stock.

Likewise, he has re-branded the company to ensure it retains an upmarket position despite not holding, nor wishing to hold, a major tractor franchise.

Both of these are moves that take the firm forward and require considerable investment.

Despite holding traditional views about taking pride in the presentation of the company, Lloyd is keen to utilise the latest in digital marketing. To this end, he has taken on Aidan Corrigan as a marketing manager.

Aidan brings experience from the motor trade – an industry that was in the vanguard of web marketing. The results are dramatic; the company now has 10,500 followers on Facebook and over 100,000 minutes of viewing on YouTube.

These are not the sort of statistics that one normally associates with machinery dealers; yet they are vitally important in a trading environment dominated by marketing.

Getting potential customers in to view the tractors is his primary goal. Part of that is regular updating of the website and attention to search engine optimisation. It seems to work; one of the tractors was awaiting shipment to Brazil and they regularly send stock to the UK and continental Europe.

McCullagh Machinery hold several agencies for implement makers, but none for tractors. Given the enthusiasm with which it tackles the trade, this might be considered a natural progression. Yet Aidan points out that it would mean a loss of independence.

Presently, the entity operates mainly as a sales business. Servicing activities are focused on their own stock, along with a few of their very local customers.

Holding a main (tractor) franchise would change this completely. He recalls one car dealership being told to spend tens of thousands repainting the showroom, when the manufacturer decided to re-brand itself. That is not a position that would suit the ethos of McCullagh Machinery – an ethos that has brought them this far already. 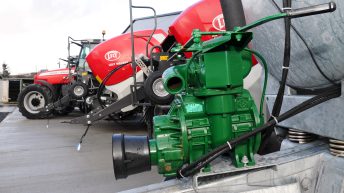 Trade focus: No hiding from big-brand takeovers on home turf 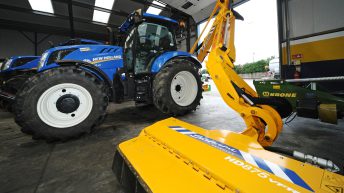