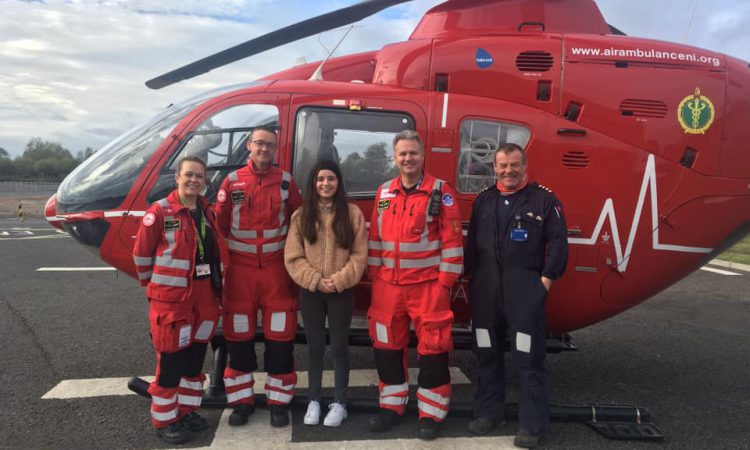 Tributes have been paid to a 16-year-old girl who passed away at the weekend – a year on from surviving a devastating quad bike accident.

Ellie McDonnell from Portaferry Co. Down recently supported the National Air Ambulance Week after she was involved in a collision while driving a quad bike at her family home last year.

She was riding a quad bike when she collided with her mother’s 4X4 at a blind bend on a laneway near the family home.

Ellie sustained significant injuries and had severe swelling of the brain as a result of the accident.

She was put into an induced coma by the medical team to protect her brain and then she was transported to the Royal Victoria Hospital in Belfast.

Her parents Peter and Mary had prepared for the worst but Ellie made a dramatic and unexpected recovery, and once discharged from hospital she raised as much money as she could for the Air Ambulance NI.

During a recent fundraising initiative, she said:

I don’t remember much about that day. All I know is that the air ambulance saved my life and without them I wouldn’t be sitting here today. I would just like to thank Air Ambulance NI for all that they have done for me.

In a statement, the principal of Down High School where Ellie was a student, Maud Perry, said Ellie’s “tenacity after her accident last year was truly inspirational, and she showed a level of courage and positivity that was remarkable.

“It was an absolute privilege to have known Ellie. We will treasure the precious memories we have of her and will miss her terribly,” she said.

She described Ellie as “an exceptional student, conscientious, hardworking and highly intelligent”.

“She was also one of the stars of the school’s equestrian team and competed regularly across the British Isles to very high acclaim. Ellie loved horses and her passion for the outdoors was obvious.”