This figure of £121 million represents a -2% reduction in overall sales value compared to 2018. 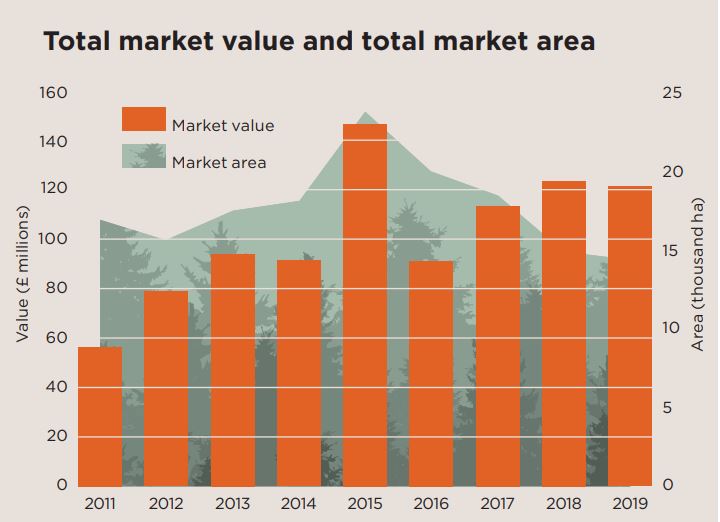 With the exception of 2015, when forest sales were bolstered by a large portfolio sale, figure 2 (below) illustrates that against a reduction in the number of hectares traded, the average value per hectare of forestry sold has generally increased since 2011. 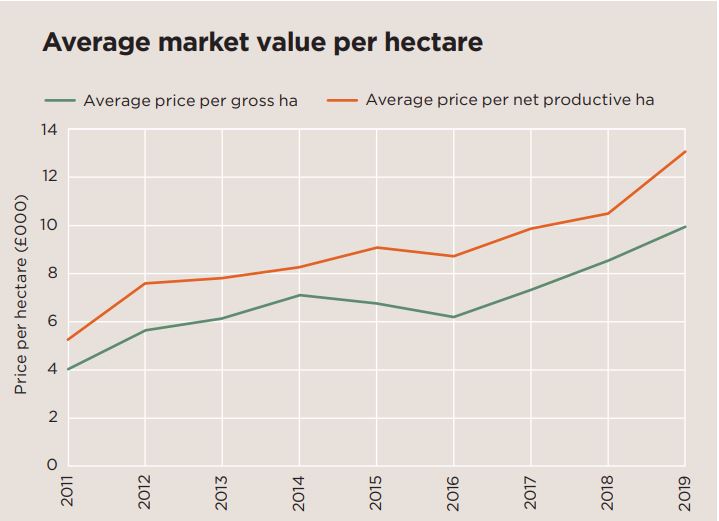 Savills analysis of the 2019 sales data shows the average gross value increased by 17% to £9,900/ha, which translates to an increase of 25% per net productive hectare to £13,100, a trend following previous years.

Although average values provide an excellent basis for trend and comparative analysis, forestry values are diverse and price is dependent on a range of factors, including location, accessibility, tree species, average age and timber volume/quantity.

Furthermore, Savills analysis also shows that the proportion of multi-rotation forests in the sample is increasing year on year. Due to the drop off in forest planting in the 1990s, even aged properties are now rare and restructured properties with a wide age range of mature and immature timber are now the market norm.

These have "different valuation dynamics as the prices combine both the immediate value realisable from felling age timber" and the "expectation value that younger trees have". This, according to Savills, allows investors to take a positive approach to pricing, as they can support value from different aspects, which has led to enhanced asset values.

According to the Savills report, analysis shows that North Scotland is a lower value area, due to the poorer physical growing conditions, variable tree growth and extended distance to timber markets.

However, the 2019, analysis reveals that across the market North Scotland witnessed the highest rise in average values from £5,630 to £8,180 (45%) per net productive hectare. The rise compares to average annual growth of 7% over the past seven years. 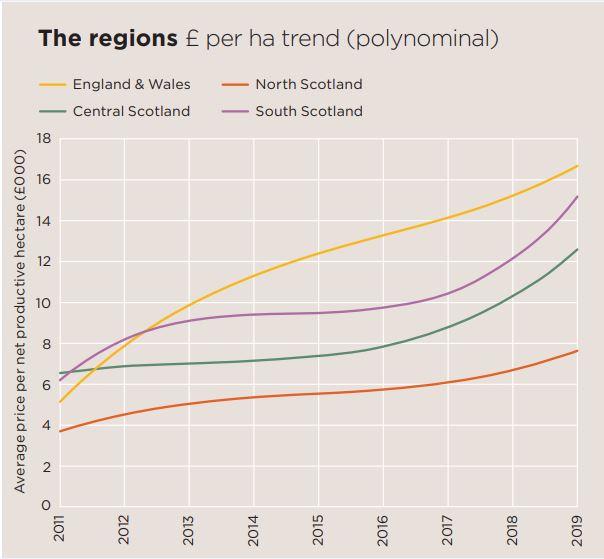 Furthermore, according to the report, this reflects improving timber prices in the region as markets become more competitive, and also a distillation of money from the prime market areas as investors become frustrated by the lack of purchasing opportunities.

With the exception of Central Scotland - where the number of hectares sold was largely unchanged - North Scotland was the only region to sell more hectares in 2019 than 2018, reporting an increase of 800ha.

In relation to Central Scotland, the average value of net productive forest rose by 31% during the 2019 forest year to £12,760/ha. This sharp rise compares to average annual growth of 6% between 2012 and 2018 and was largely a result of some high prices paid in Argyll, which is now considered a mainstream investment area.

Although Central Scotland experienced no real change in the number of hectares sold, it had the largest market share across Scotland, England and Wales at 34% with just under 5,000ha transacted.

In reference to South Scotland, in the 2019 forest year average values rose by 38% to £15,170 per net productive hectare. This strong growth follows a slight dip in 2018, according to the report.

Although the number of hectares sold was -17% less than the 2018 forest year, South Scotland’s market share was the second largest of all the regions.

In Scotland, the south remains the "most competitive area for timber marketing", and forests here "benefit from excellent physical conditions leading to fast, even growth".

In line with the previous year’s average, values are boosted by a scarcity of productive woodland for sale (figure 4). 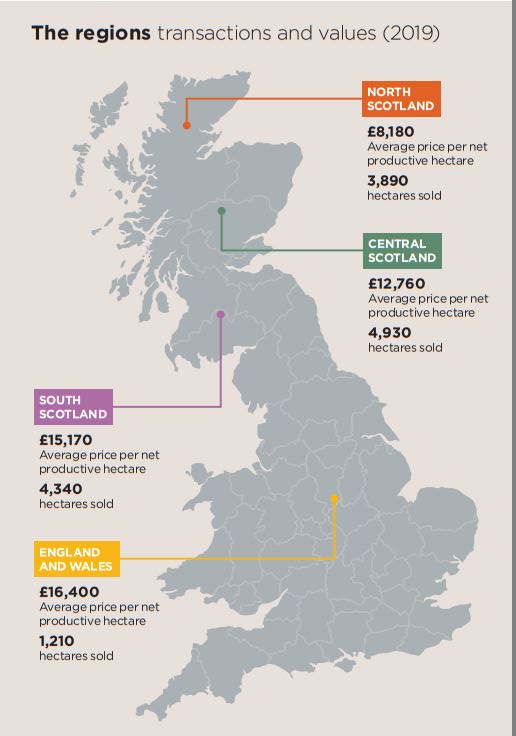 The average price of commercial forestry traded in England and Wales is higher than any Scottish region and since 2013 has cost over £10,000 per productive hectare.

Although the 2019 forest year reports a slower rate of value growth in England and Wales (5%) compared to the Scottish regions, average net productive values were above £16,000/ha.