Ulster Bank is to remain the principal sponsor of the Balmoral Show until at least 2018, the bank has announced.

Ulster Bank, which has been the principal sponsor of the three-day agri-food and family event since 2009, has agreed a new three-year deal that will see it remain the key sponsor of the Show until at least 2018.

As a result, the Show will continue to be called The Balmoral Show, in partnership with Ulster Bank.

Making the announcement this morning, Royal Ulster Agricultural Society (RUAS) Chief Executive, Colin McDonald, said that the agreement is a major boost for Balmoral Show as it seeks to continue to build on its successful move to its new location.

“Ulster Bank has been a fantastic sponsor of the Balmoral Show and its continued support will play a central role in helping us develop the event as a fitting showcase for the agri-food sector and a premier family occasion,” McDonald said.

“There is so much potential at Balmoral Park to expand and enhance the show. We are delighted to have Ulster Bank’s support, as a strategic partner and a passionate supporter of the local agri-food sector, to help us capitalise on the possibilities,” he also said.

Richard Donnan, Ulster Bank’s Managing Director of Retail Banking and Northern Ireland SME and CIB, said that the Balmoral Show is one of Northern Ireland’s most important and popular events.

“Ulster Bank is proud to be so closely associated with and centrally involved in it. It’s an event that is important to our customers and our economy and therefore we are delighted to continue our support.

“As we seek to continue to grow our business in the agri-food sector, with £1.5 billion available to lend to businesses this year, continuing to be the principal sponsor of the Balmoral Show is a very important part of our strategy and a great fit for our business,” Donnan said.

Ulster Bank Senior Agriculture Manager, Cormac McKervey, said that these are challenging times for many farmers, but the sector has proven itself to be resilient and its long-term prospects remain strong.

“We see our principal sponsorship of the Balmoral Show as a symbol of our commitment to supporting farmers through the good times and the more difficult times.

“We also think the current challenges the sector is facing underline the importance of Balmoral Show as a place for farmers to meet, share their experiences, and plan for the year ahead,” McKervey said. 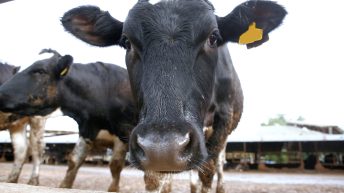