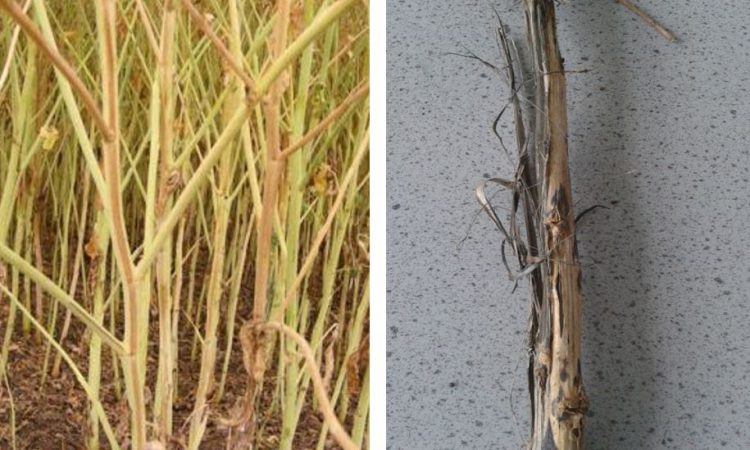 The findings of new AHDB-funded research have shown there is significant potential to produce verticillium disease ratings as part of the Recommended List trials.

Verticillium wilt has recently been renamed as verticillium stem stripe – a new common name which better reflects the symptoms caused by the disease.

The finding that consistent and reproducible differences in verticillium wilt infection levels occur between oilseed rape varieties means researchers could potentially test varieties to find those with the best resistance.

The development is good news for growers, who indicated recently that disease resistance is one of the most important features on the annual lists.

The presence of the soilborne disease, which is caused by Verticillium longisporum, was first detected in England in 2007.

In 2014, AHDB issued a call for research to improve understanding of the nature of disease resistance, which was awarded to NIAB.

Inoculated and naturally-infected trials were conducted over three seasons. These found highly consistent differences between varieties in the level of symptom expression.

Although no varieties were found to be completely resistant, several varieties showed consistently low infection levels.

Associated with fewer fungal spores, these varieties could play an important role in reducing the amount of disease returned to the soil.

Although these were variable, susceptible varieties showed significantly greater yield depression in one trial, and the more resistant varieties showed little or no effect throughout all trials.

Oil content was not significantly affected by the presence of infection. Surprisingly, thousand seed weight was also unaffected in the trial that showed significant yield depression.

This indicates that components of yield – such as pod number or seeds per pod were affected – rather than seed size.

There was an indication that some varieties may be tolerant to infection, having a small and non-significant yield penalty, despite high infection levels.

Pathogen isolates collected from infected crops in Suffolk and Lincolnshire were used within the inoculated tests. These isolates belonged to the A1D1 lineage.

Because of the strong similarities in variety performance across the UK, the researchers concluded that the UK V. longisporum population is relatively uniform.