An annoyed Croatian farmer has decided to block cars into his field by ploughing around them.

The disgruntled farmer came to the drastic action following repeated efforts of telling the car owners not to park on his land failed.

The farmer, Paveo Bedekovic, had corn planted in the field, website 24 Sata reports.

On Sunday, he decided to plough what he could of the field around the cars which then, according to reports caused the owners of the cars to call the police.

However, since the land is owned by Bedekovic he can do what he wishes with it and there wasn’t much the police could do.

The video shows the farmer ploughing away as owners of the cars watch on, unsure of what to make of the situation.

The person recording the video starts laughing as Bedokovic approaches on his tractor with the plough and horns blowing can also be heard.

As the video ends it appears that the tractor struggles to turn over the soil, nothing a weight block wouldn’t sort out to balance the effort required for the two sod plough.

The video has amassed almost 2.5m views since it was posted on November 16. 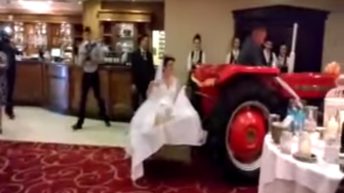 Video: A bride arrived to her wedding reception on a transport box 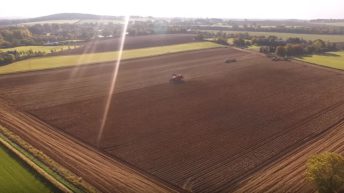 Video: The potato harvest came to an end in Kildare recently