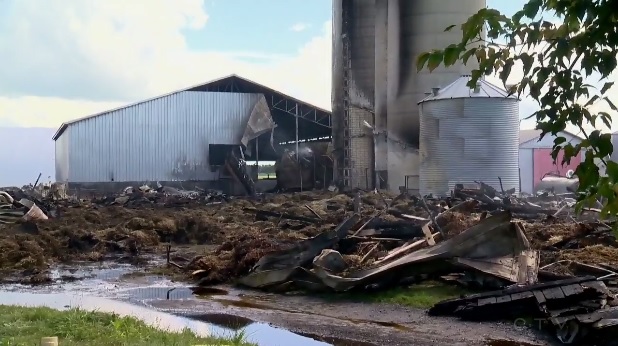 Some 160 dairy cows were killed in a fire at a dairy farm in Canada over the weekend, CTV Montreal News has reported.

Some 14 cows escaped from the barn in St-Mathias-Sur-Richelieu but some, scared, ran back inside and seven of them had to be euthanized.

The seven surviving cows were moved to a neighbouring farm and according to vet Anne Daigneault they are burnt but their lungs are fine. They are also being monitored for pneumonia.

CTV Montreal reports that firefighters received a call just before 4:30am on Sunday morning and found two buildings on the farm, which housed the cows, in flames.

Christine Aubin, wife of the owner, said they are the fourth generation to run the family farm. They were able to salvage some equipment once they arrived, however, she said the fire was too intense to rescue the majority of the livestock.

“When we arrived there was too much fire everywhere, we couldn’t go inside,” she told CTV Montreal.

It is understood that around 40 firefighters fought the fire and that it took eight hours to control. So far the exact cause it unknown.

Annie Daigneault, who is also family member of the owners of the dairy farm, said its not unusual for animals to run back into a burning barn.

“It’s because they are scared and they know the barn so they want to go back into the barn.”

Speaking to CTV Montreal, Martin Gougeon of the Richelieu Fire Department said that there is an investigation ongoing but that they have ruled out a criminal fire.