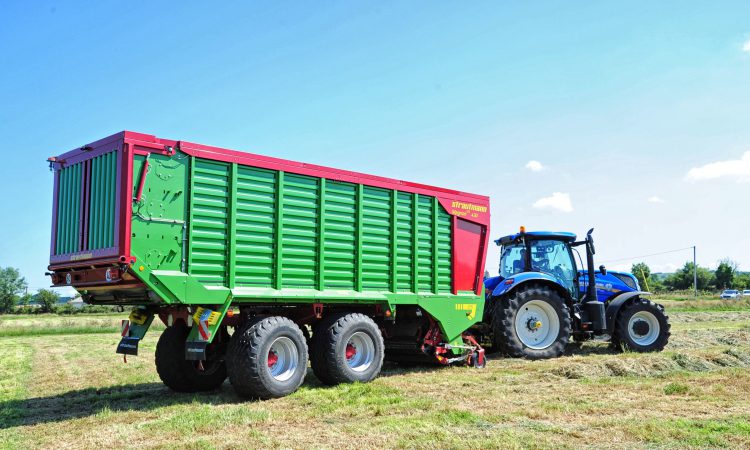 It was at the last Agritechnica that Strautmann launched its latest range of forage wagons, but has taken until this season for them to arrive in Ireland.

Known as the Magnon series, the machines come with several new features, the most notable of which are plastic fingers on the pick-up reel, rather than metal tines.

Plastic fingers now do the lifting

In a world where metal tines are firmly established as the way to pick up grass from a stubble, the idea of a plastic alternative will face the problem of credibility, but Strautmann is not fazed by such objections.

Named the ‘Flex load’ system, the individual plastic components are more akin to stubby fingers rather than the long bendy tines we are accustomed to.

They are mounted to the reel by a single bolt and replaceable plate, and may be swapped out with the removal of the band.

Strautmann claims that the wear rate is a great deal less than that of steel and so they last a good deal longer.

The chief advantage proposed for switching to plastic is that they can be run closer to the ground and more easily adapt to uneven terrain, without contaminating the swath as it is collected.

They are also quieter and there isn’t the clatter normally associated with steel tines.

Nor is there the risk of broken tines posing a threat to tyres or livestock should one happen to part from the reel.

The pick-up reel is powered hydraulically, allowing its speed to more evenly match that of the tractor.

Variations in its speed are normally controlled automatically through the wheel speed sensor, but this system can be switched off.

Other novel innovations announced back in 2019 include the Exact-Cut knife system and a hydraulically-operated front panel that encourages better compaction and increases load capacity.

The pick-up reel unit itself is not entirely new. It retains the patented distribution roller which spreads the forage across the width of the cutting unit.

This ensures that all the knives of the reel are engaged in cutting the material, rather than just those at the centre.

The roller can best be thought of as a combine header auger in reverse, the worm action moving grass away from the centre knives.

The company claims that knife wear is more even and power requirement is reduced by doing so.

The rotor itself has its stripper rows arranged in a helix. Each stripper has a Hardox steel tip that acts as a sheer bar for the knife blade, resulting in an action more akin to scissors, rather than forcing the material against a sharp edge.

Such an arrangement is said to result in clean and efficient cutting with a more consistent chop length.

Yet it does rely on the whole cutting unit being mounted more rigidly, to ensure a precise passing of the blade against the sheer point.

Such rigidity need not deter from the ease of blade removal for sharpening or replacement.

The knife bank is easily accessible and the blades can be removed quite easily with the aid of a tool carried just above the cutting zone.

To prevent damage by stones, the blades move back against rubber dampers rather than springs.

They are then reset by a return spring after a few seconds, allowing the object to pass through and into the trailer without further detriment to the blade edge.

The idea behind this is to ensure that only one small part of the blade is affected at the contact point, rather than have the whole edge scoured.

Power saved at the intake

Having passed through the knife bank, the grass enters into the chamber against the pressure of the front panel.

It was decided not to drop the front of the floor, as this would enlarge the ‘throat’ of the machine.

Strautmann’s engineers found that the larger the opening, the greater the power needed to push the grass through it, before it was carried away by the slats.

Being too small would have the same effect; it was a question of finding a happy medium.

Rather than a wooden floor as found on the smaller models, the Magnon range has a galvanised metal base as standard.

Square link chains move the twin sets of slats, which return by wooden slides mounted underneath the floor.

The moveable front panel is hydraulically swiveled into the cargo space to achieve maximum compression of the load.

When the cargo space is full, the panel rotates forward to allow an extra 5m³ of space to become available at the front.

Holding it all together is a chassis with either two or three axles, depending on the model.

The axles are mounted on half springs with hydraulic rams supporting the weight and providing suspension.

These rams also raise and lower the trailer for either field work or for transport.

There are various options available for the steering, which may be either passive or forced.

In command of the machine is a new ISOBUS compatible control box which comes with a 15cm touchscreen and integrated membrane switches.

The company has divided the operation of the wagon into three separate modes which are fill, transport and discharge.

By the selection of the appropriate mode, the machine automatically sets itself for whichever operation is being performed.

The Magnon is available in three capacities which are measured by the DIN 1741 standard. They are 42m³, 46m³ and 52m³. The Strautmann range is imported by IAM of Kilkenny.