Home » Dairy » Why milk 2 cows when one Holstein will do?

Why milk 2 cows when one Holstein will do? 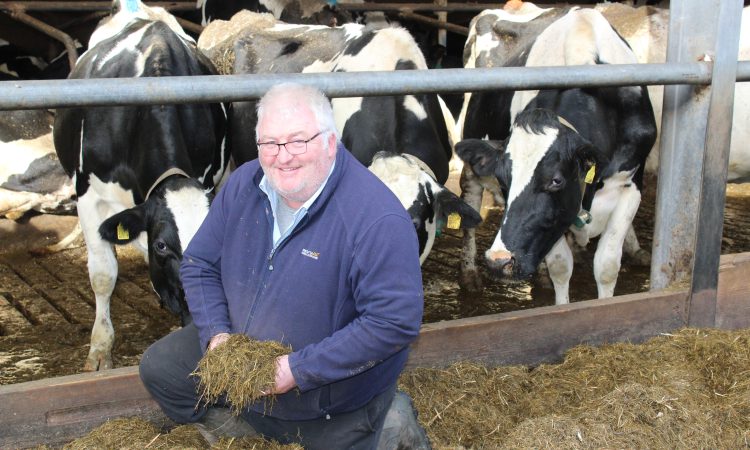 Co. Down dairy farmer Charlie Weir is in the middle of his second year as chairman of Holstein Northern Ireland (NI).

Pedigree Holstein herd owners now account for half of the milk produced in the north and this figure is likely to grow during the period ahead.

“The amount of money invested by local breeders in the world’s best black and white bloodlines has been staggering. But it’s an investment that has paid off in spades.

The Prehen, Relough, Glasson and Hilltara herds, owned by the Smyth, McLean, Haffey and McCormick families respectively, are now renowned throughout the UK and beyond as centres of Holstein breeding excellence.

“And this is only the tip of the iceberg. But there’s a lot more to the Holstein breed in Northern Ireland than those who have made it to the top. A lot of our work is centred on bringing through the next generation of pedigree breeders.

“This is why the work we do to encourage the grading-up of herds is so important,” Weir added.

The Co. Down man believes that the Holstein breed has many of the answers when it comes to delivering a sustainable dairy sector for Northern Ireland and the island as a whole.

“It’s all about delivering efficiency. The Holstein cow can out-produce most other breeds by a factor of two to one. It makes sense from every perspective to produce as much milk as possible from the least number of cows,” Weir added.

The Holstein cow takes centre-stage in this regard. The Holstein will also play a key part in allowing Northern Ireland’s milk sector to expand further over the coming years.

“Again, it’s a business model that is centred on producing as much milk per cow as possible.”

The average milk yield in Northern Ireland currently stands at 8,000L per cow. According to the Holstein NI chairman, there is nothing to stop this figure rising to 10,000L.

“If this could be achieved, overall milk output could be increased by 25%. And there is nothing to hinder this improvement in output from being achieved.”

Commenting on the future environmental sustainability of the dairy industry, the Holstein NI chairman is quick to point to slurry management being the new ‘quota’ restriction that confronts farmers in this regard.

“And, again, the question arises: Why milk two cows when one will suffice? Slurry production and how to make best use of it are already major issues for the Dutch dairy industry. It’s only a matter of time before they arise in a similar context here. But, once again the Holstein cow can be a major part of the solution,” Weir concluded.