Amazone gets serious about getting slurry out

In many countries, slurry application is most usually associated with grassland.

Meanwhile, over in continental Europe, a good deal of the material - often from pig rearing - is spread on tillage ground. Amazone has latched onto this growing trend, with an optional adaption of its larger Catros disc cultivator.

Agarheute, the magazine of the DLG, has reported that for manure incorporation using self-propelled and large slurry tankers, Amazone offers the Catros+ in 5m and 6m working widths.

The company has now taken the idea of incorporation through cultivation further, by adapting the disc-sets to better withstand the corrosive liquid as it passes through the implement during use.

The upgrades to the standard machines should help to improve functional and operational safety and extend the service life, according to Amazone. In addition to special drive-seals for the disc bearings, extra lubrication points are inserted at the bearings of the folding points.

Amazone does not produce its own distribution head for slurry. Instead, it offers a choice of units from a third-party manufacturer.

The Catros+ 2TX can be combined with either the Vogelsang DosiMat or the Vogelsang ExaCut distribution head, depending on the type and quantity of solids within the slurry. 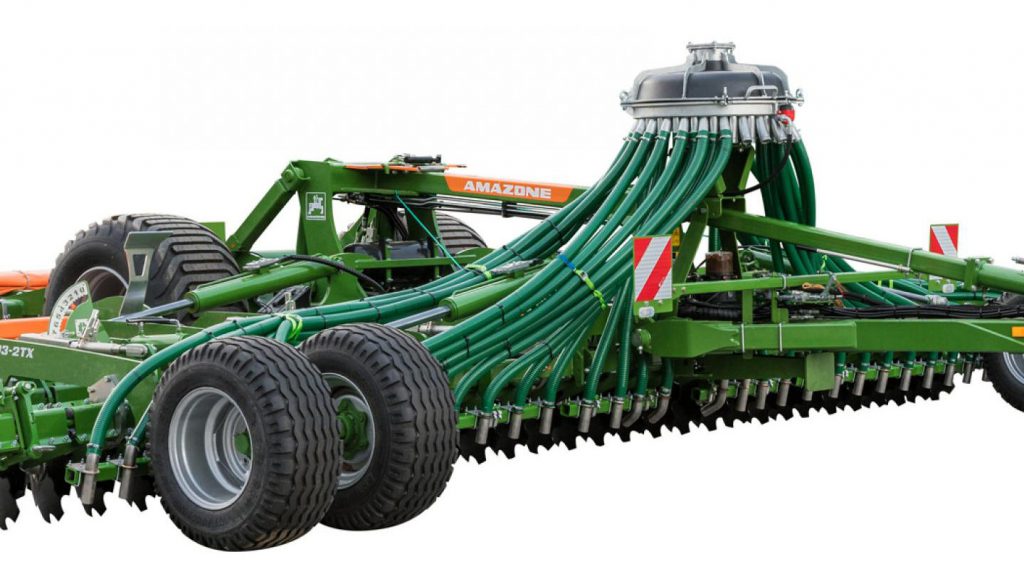 There is a corresponding mounting kit for whichever unit is chosen.

With the Catros+ 2TX and the 'pro' package, manure can be introduced from 3cm to 14cm deep.

Having passed through the outlet pipes, the liquid is placed in front of the first row of discs, which incorporates it into the surface. The subsequent second row of discs then mixes it into the loosened soil.