Home » N.Ireland » Are your ewes wasting silage? Check out how this farmer overcame this problem

Are your ewes wasting silage? Check out how this farmer overcame this problem 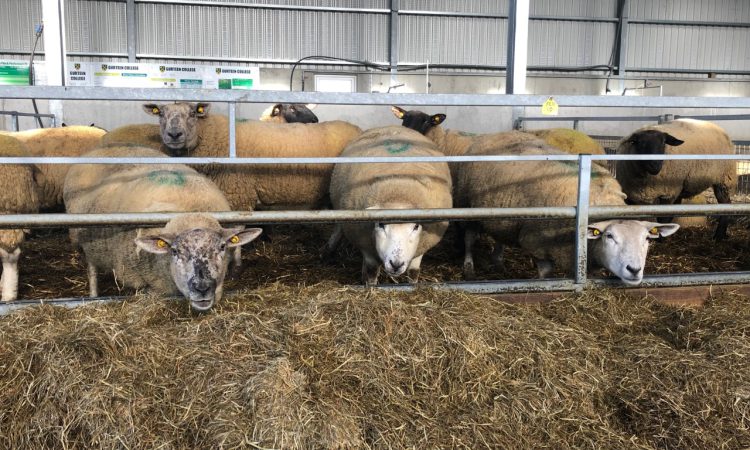 Last October, AgriLand paid a visit to Kenny O’Donnell – who is a pedigree Lleyn breeder – in Belmullet, Co. Mayo.

He was just after building a brand new slatted sheep shed in 2018, for his flock of 80 pedigree ewes.

However, after analysing his first year in the new shed, he noticed that his ewes were wasting a lot of fodder.

The sheep were pulling the silage in off the passageway and pulling it down into the slats.

Speaking to AgriLand, Kenny said: “I have received a lot of questions regarding the sheep slats I installed in my shed, in particular, how to stop the ewes blocking up the slats with silage that they pull in from the passageway.

“This was a problem the first year I housed the ewes. On a daily basis, after work, I would have to sweep the slats of any silage the ewes dragged in.

Not only is the fodder being wasted, but it is hard to source good-quality silage – especially around this area.

“However, I took it upon myself to fix this problem and I believe it has worked a treat.”

At the time of AgriLand’s visit to Kenny, he was working on a feeding barrier design that would prevent silage from being wasted.

Kenny explained: “I had been working on a prototype design last year and I tested it out when I housed the ewes there a few months back.

“The new feeding design is fitted to all six barriers and I am glad to say, it has been a success.

“It has reduced the need for me to sweep slats from every second day to about every tenth day, as well as reducing the amount of silage being wasted.

“There is an 18in strip of concrete inside the feeding barriers, that makes the gathering of silage easier and also enables me to spread lime inside the pen in order to reduce lameness issues.”

Kenny said that if farmers plan to incorporate a similar design into their shed that they should make sure their silage is chopped up finely – as this will prevent ewes from dragging large amounts of feed into the pen.

The feeding barrier Kenny fabricated has three different rotating positions. The barrier can drop down on the silage and allow the ewes access to eat the fodder through the two-by-two box mesh.

The advantage of this system is the mesh frame can be lifted over the feed face, allowing the sheep to eat concentrates from the passageway.

Kenny also noted that, in springtime, the mesh frame can be used to close up the pens and prevent lambs from entering the passageway if a farmer wanted to dose his sheep.

The three different positions the mesh frame can be positioned are listed (below):