‘Full house’ of defects for ‘fully loaded car and horsebox’ 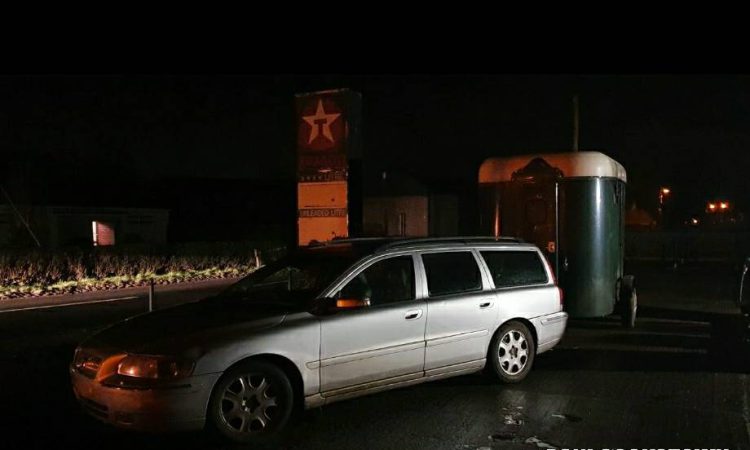 A “fully loaded” car and horsebox trailer notched up a “full house” of roadworthiness defects – being summed up as a “dangerous death trap” by the police officers that stopped it.

Discovered in the rural area of Moortown, Co. Tyrone by members of Cookstown branch of the Police Service of Northern Ireland (PSNI), the vehicle in question was found to have a number of serious defects.

Picked up in complete darkness, the car and trailer had no paperwork of any kind with bald tyres and no lights or brakes.

In a statement on social media, local PSNI officers listed:

“No lights; no brakes; no tread, pure slicks; no insurance; no MOT; no road tax – no sense.

“Crews from Cookstown Neighbourhood Team carrying out anti burglary checkpoints in Moortown stopped this fully loaded car and horsebox trailer a short time ago – another vehicle that should not be anywhere near a road.”

The PSNI confirmed that the vehicle was seized and will now be scrapped, hinting at a court appearance as well with the concluding comment:

“Amazing how often we have to repeat it – if you take a dangerous death trap of a vehicle onto the roads in Cookstown we will seize it and put you in front of a judge.”