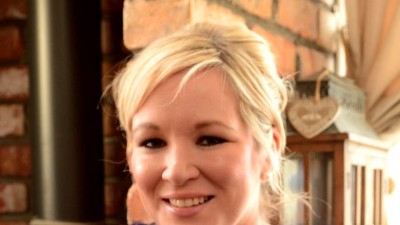 According to Sinn Fein sources in Northern Ireland, Assembly legislation does not permit the Mid-Ulster Sinn Fein politician to serve as the acting Minister for Agriculture.

It is understood that no ministerial announcements will be made until the Northern Ireland Programme for Government is announced over the coming two weeks.

O’Neill was elected to the Assembly for the Mid Ulster constituency in 2007, sitting on the education committee.

In 2010 she became the first woman to hold the position of Mayor of the Dungannon council area.

In 2011 O’Neill was appointed as Minister for Agriculture and Rural Development.

According to Sinn Fein, O’Neill has delivered a “record-breaking” Rural Development Programme to support farmers and those living in rural areas.

She has also delivered improvements in the Single Farm Payments allowing farmers to access payments quicker.

“Michelle is the first Executive minister to decentralise a government department with the relocation of the DARD headquarters to Ballykelly in County Derry,” said Sinn Fein.

In March, O’Neill announced that farmers in Northern Ireland affected by the recent flooding will be able to apply for £1,000 financial aid under a new package of measures.

In January, O’Neill warned that a British exit (Brexit) from the European Union would be detrimental for Northern Ireland’s agri-food sector.

The Northern Ireland Assembly is currently dissolved. Dissolution is the name given to the period of time (usually six weeks) between the announcement of an Assembly election, until the final election results.

The Northern Ireland Assembly Commission was appointed by resolution of the Assembly on the 23 May 2011.

The Commission is the body corporate of the Northern Ireland Assembly. It has the responsibility to provide the Assembly, or ensure that the Assembly is provided with the property, staff and services required for the Assembly to carry out its work.