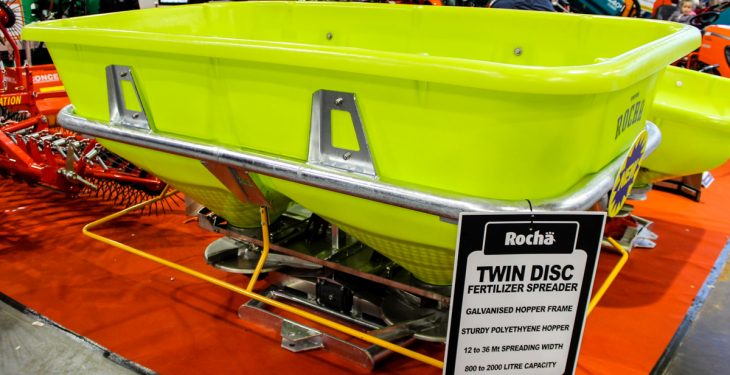 Rocha is a Portuguese brand

The machine is noteworthy for its ‘high-density polyethylene’ hopper. With a 2t capacity, the twin-disc KC2000 RD can be specified with in-cab controls, lights, a fold-over cover and a border (headland) spreading kit.

In standard guise, the machine comes with a fully galvanised frame and carries a list price of €3,950 excluding VAT. Spreading widths are from 12m to 36m.

Rocha is a Portuguese company; its origins go back to the aftermath of the Second World War. It’s best known for sprayers. In fact, the founder’s first product was a knapsack sprayer.

In more recent decades, the company set up a new production unit for the development of a line of polyethylene products. That ushered in a new range of fertiliser spreaders, including disc and pendulum models. The company is also involved in the manufacture and distribution of a range of other agricultural machines.

Nowadays, its implements are exported to a growing number of countries, including Spain, France, Angola, Mozambique, Morocco and, of course, Ireland.

New at the show

PJ Callan also showcased a selection of other new (or new to Ireland) items at the show, including an Einbock organic weeder, a Bargam RRX60 compact baler for the equine sector and a revamped Kioti CK4000 compact tractor.

Also on the stand were an Osella sprayer, a BCS 2-wheel tractor, a Balfor firewood saw and a Marolin hedge cutter.

Daedong is the company behind the Kioti brand. It’s legacy stretches back to 1947; Kioti now has a presence in a wide variety of countries around the globe, including Ireland.