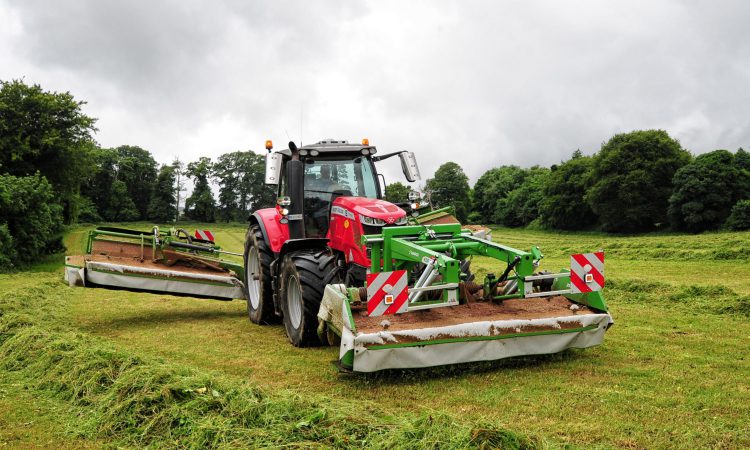 SaMASZ is a company based in the the city of Bialystok which lies in in the north east of Poland. It was here, in 1984, that Antoni Stolarski opened a small workshop where he serviced and repaired cars.

It wasn’t too long before he moved to manufacturing agricultural equipment and within a month he had built and sold his first potato digger.

Within two years, the total had reached 90 diggers and his new firm had moved on to drum mowers.

Growth continued and by the mid-90s they were also producing disc mowers with nearly half the output of all machines being exported, mainly to Germany.

Today, the company manufactures a wide range of machines with the major emphasis still being on mowing.

Other agricultural products include rakes, tedders and mixer wagons.

It was in 2014 that Timmy O’Brien of Egmont Agriculture, based in north Co. Cork, purchased a SaMASZ set after seeing the products at Agritechnica.

The following year he took on the agency for the brand here in Ireland.

Timmy started Egmont Agriculture as a contracting business in 1986. His first tractors were a Ford 4600 and MF 135. The Ford is still in the yard and he has stayed mainly loyal to blue tractors since, New Hollands making up the majority of the present contracting fleet.

The interlopers are from Claas, one of them being a 330hp Xerion which is in the middle of its second season, with a full set of triple gang mowers.

This unit has performed without fault according to Timmy, and he believes it an ideal combination for contractors, being easy to manoeuvre and offering much better visibility of the cutting gear for the operator.

Since taking on the importation of the SaMASZ range, Egmont Agriculture has sold around 60 full sets of triple gang mowers throughout Ireland, the bulk of the sales being in the north of the Island.

There is still a steady trade for smaller mowers with basic drum and disc units featuring prominently in the sales figures.

All the products are fully backed up from a well stocked parts store, although he stresses that reliability is not an issue.

Price is obviously an important factor but that does not mean to say that the equipment is poorly built or finished.

Timmy notes that the design is right, with the factory engineers striving to achieve the right ‘balance’ between the tractor and mower.

This, apparently, is not as easy as some manufacturers entering the market have assumed. 35 years experience in making mowers is not something that can be replicated overnight.

SaMASZ also makes its own mower beds in-house and sells them on to other manufacturers.

These are perhaps the most critical components of a disc mower and must be right if the machine is to work well.

David and Steven Collins of Co. Wicklow are a father and son partnership, whose main contracting business purchased their first set of these Polish-built mowers three years ago.

They were bought to replace machinery from a better known brand which had served well for many years but was ripe for replacement.

This is the second set from the company; they traded in their first at the start of the season for a brand new replacement with a two-year warranty.

The saving, over a better recognised brand, was 25%, yet by no means was cost the main factor.

Reliability is paramount in the contracting world, and Stephen stresses that the only time they needed a spare part, it was with them the following morning.

Other than this minor interruption, the mowers have given them no trouble during a total of three cutting seasons.

It is this sort of backup which convinced them that the brand was worth sticking with, along with the near pristine condition of the machines after two years, and around 5,000ac of cutting.

A further feature of the machines praised by David Collins is the mower beds, which he considers as being perhaps the strongest on the market.

However, despite the high regard they have for the way the mowers operate in the field, there was some small reservation expressed over the in-cab controls.

The lifting of the rear units, individually, can be something of a fiddle when not used to the switches.

The Collins partnership bases its mowing operation around a Massey Ferguson 7726 with a rated power of 250hp rising to 265hp on demand.

It is a 2019 ex-demo model and is well matched to the three mowers.

Stephen is the one who is usually found behind the wheel and rates the rig highly.

In work, he has it set up to leave a short stubble rather than scalp the ground, leaving a green finish that will grow away quickly.

The fields being tackled at the time of Agriland’s visit had been grazed earlier in the spring, so it was a light first cut, hardly the most testing of conditions.

However, he insists that the mowers are just as happy in the heavy, wet crops more associated with Irish silage.

A key to the effectiveness of the system is Stephen’s use of the digital control features on the tractor.

Being a CVT model, there are no gears to worry about and the various engine, PTO (power take-off) and hydraulic speeds can be easily set for immediate engagement when required.

He also makes use of GPS and auto steering, leaving him more or less hands-free as he works through the crop.

Turning on the headland is one area which has so far evaded his zeal for automation, but that may yet succumb.

Keenly priced and in demand

So are the mowers cheap and cheerful or cost effective with all the sophistication one would expect of higher priced brands?

Naturally Timmy O’Brien would insist that it is the latter, and this would appear to be backed up by one very satisfied customer at least.

David also points out that when it came time to trade in the mowers, there was a buyer waiting who collected them straight from his yard.

Lesser known brands tend to suffer when it comes to prices in the the second-hand market due to lack of demand, but the two-year-old set was snapped up straight away and the Collins partnership were satisfied with the deal.

More established brands would be well advised to take notice of this new kid on the block, for it gives them a run for their money, and they’ll need to work hard to stay ahead.