As the round of autumn store cattle sales get into full swing, store cattle producers are seeing average prices of £30 to £50 per head lower than last year, according to the latest Quality Meat Scotland (QMS) analysis.

The slide in store prices has occurred despite auction throughputs in recent weeks being lower than last year.

This is particularly relevant for younger weaned calves where the toll of a difficult spring, which saw young calf mortality much higher than last year, is being reflected in sale volumes.

“Cattle finishers are appearing to be a little more cautious over their future,” said Stuart Ashworth, QMS director of economics services.

This is not surprising given the increase in feed grain and protein prices, which are currently 25-30% higher than last year, and concerns over winter forage and bedding stocks.

“However, equally causing uncertainty is the ambiguity over the state of the Brexit discussions,” added Ashworth.

The political uncertainty translates into a lack of clarity as to the terms of trade both for importing and exporting beef and indeed any food product.

“The questions that need to be resolved are many and varied, including not only the level of tariffs and access both for exports and imports, but also the logistics and administration that will have to be performed before trade can take place,” said Ashworth.

“The answers to these questions will almost certainly add cost to the supply chain and make trade more difficult, but to different degrees.”

Advertisement
While cattle finishers are familiar with the price variation that comes from fluctuations in supply and demand, the uncertainty over market access makes the risk of price volatility much higher and adds more variables for consideration when forward planning a business.

Ashworth commented that, due to this business environment, store cattle buyers are slightly more cautious.

“Adding to their caution is that, despite some increase in recent weeks, prime stock prices are struggling to match last year’s levels.”

Prime stock prices are also struggling to match last year’s levels across the EU as a whole, and are down 2.5% year on year, although Irish prices are up 0.5%, according to QMS.

“Beef production in the first half of 2018 across the EU 28 has increased by 1.8%, but within this there is significant growth in beef produced from cows and heifers and a decline in steer beef production,” said Ashworth.

“UK slaughter statistics show a similar trend with the cull cow kill up 7% over the first eight months of 2019 and prime heifer kill up nearly 4%.

This slaughter data suggests some restructuring of the cattle herd taking place across the UK and Europe.

“Provisional June 2018 census figures for England show a decline in the beef herd of 1.3% and a smaller decline of 0.9% in the dairy herd,” added Ashworth. “Scottish census results will be published shortly.” 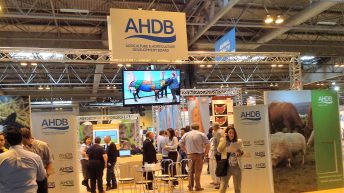