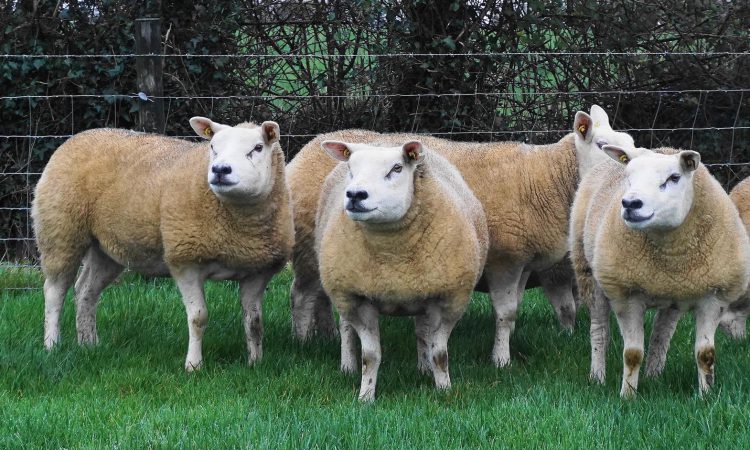 Most sheep sales are now over for 2020 but there are a few exceptions. The Texel Twilight sale is set to take place in Station Road Mart Cootehill on Tuesday (December 29) at 6:00pm.

The sale will see 55 pedigree Texel in-lamb hoggets up for grabs from 10 breeders from the North East Texel Club.

The Twilight Sale is in its fifth year of existence and, according to the club’s chairman, Michael McHugh, it is encouraging to see some new breeders, whose flocks were established with the purchase of ewes at previous Twilight sales, now exhibiting sheep at this year’s sale.

Speaking to AgriLand about the upcoming sale, Michael said: “The sale will consist of progeny from the top genetics both here in Ireland and the UK. In the recent past, sheep bred by members of the North East Texel Club have been performing well at shows and sales both here and abroad.

“Oberstown Usain Bolt, a ram bred by the Farrell family, was the first and only ram from Ireland to achieve the ‘UK Sire of the Year’ award.

“The Farrell family has 10 sheep at the sale with the majority having shared ancestry with “Usain Bolt”. A number of ewes at the sale are in-lamb to the 2018 Overall Champion and 2019 Reserve Male Champion at the Blessington Premier Sale.

“A unique feature of the Twilight sale is that practically all sheep at the sale have been performance recorded and will have Sheep Ireland stars displayed in the catalogue.

“The sale will consist of animals in the top 10% for Replacement and Terminal stars. Sheep Ireland has presented data to the Irish Texel Sheep Society recently showing that, on average, progeny sired by home-bred rams are outperforming progeny from imported sires in important replacement traits such as: lambing ease; milking ability; lamb mortality; and the number of lambs born.

“Based on these results the Irish Texel Sheep Society has increased the cost of registering imported ewes to €100/head compared to €10/head for home-bred animals.

“This is with the view of encouraging new and existing breeders to purchase top performing Irish-bred genetics. Customers will have a selection of such animals to choose from at the Twilight sale.

The progeny from many of the ewes in the sale will be from 5-star performance rams such as Cherryvale Ringmaster, Mullan Armani, Crosserlough Charlie, Recess Boyden, Greenhill Chief, Kilduff Carlos, Recess Dominic and Kilclammon Dontrell.

“This sale gives existing and intending breeders of Texel sheep a unique opportunity to purchase top genetics at affordable prices.”

Viewing will be from 5:00pm and online bidding is available through Marteye by registering with Cootehill Mart prior to the sale.