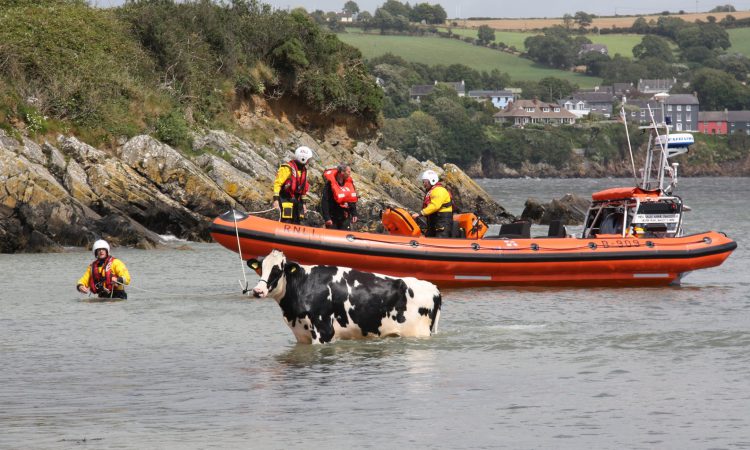 A one-year-old Friesian heifer is currently recuperating after making a bit of a “splash” over the weekend – when she was rescued from the waters off the coast of Co. Cork, Ireland.

The animal – apparently named ‘Ghost’ – is believed to have fallen over a cliff from the field she was in into Kinsale Harbour, according to Kinsale Royal National Lifeboat Institution (RNLI) which launched a boat to rescue her.

In a statement on social media on Saturday, August 10, members of the RNLI branch said: “We had a bit of a bovine adventure today, rescuing poor Ghost – a year old Friesian – who tumbled from her field at Castlepark onto the rocks below.

“Happy to say she is now safely tucked up in her shed, with a good old feed of hay,” the statement added.

As can be seen in the footage provided by the lifeboat charity, the heifer was fitted with a halter and gently towed back to land following her dip in the ocean.

Once back on the beach, the bovine took a little convincing by the volunteers who rescued her to follow them ashore.

However, the RNLI – comprised of four volunteers, Jonathan, Sully, Patryk and Ethan – eventually succeeded in coaxing her back to dry land.