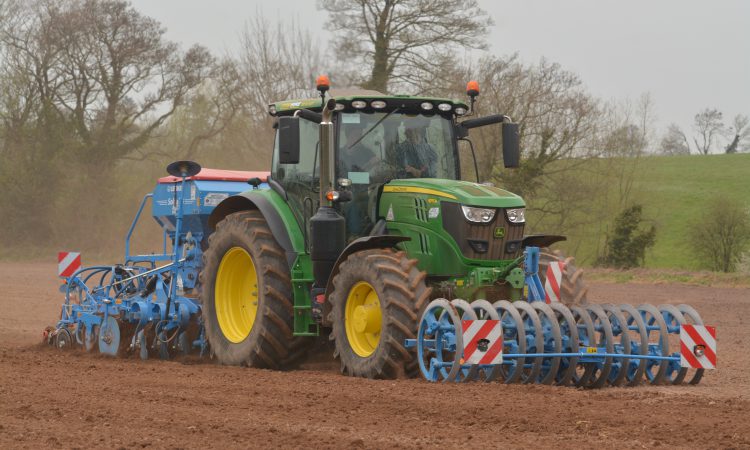 The current spell of warm weather will be welcomed by almost every farmer, but if it were to continue for the next few weeks, it would increase the risk of Barley Yellow Dwarf Virus – BYDV – becoming a real problem within newly emerged barley and wheat crops.

It is not unknown for periods of warm weather to coincide with autumn cereal planting.

And as College of Agriculture Food and Rural Enterprise (CAFRE) crops development advisor, Leigh McClean, pointed out to Agriland, it is appropriate for cereal growers to be aware of the BYDV threat as they undertake this work.

McClean explained: “Whilst not a widespread issue in recent years, cereal growers should not disregard the BYDV risk this season.

The ‘green bridge’ for wingless aphids can be destroyed by burning off seven to 10 days before ploughing, or allowing 14 days between ploughing and sowing.

“Infection by migrating winged aphids is the most common route for infection in autumn cereals. To assess this threat, AFBI [Agri-Food and Biosciences Institute] advises using a suction trap to monitor cereal aphid migration.

“Data is updated weekly along with relevant advice.”

He said: “As early drilled autumn cereals are at greater risk, farmers should balance this against later sowing, slower emergence and potentially poorer establishment.

Only apply pyrethroid sprays when aphid colonies, not individual aphids, are present on leaves, to slow development of pyrethroid resistance.”

A few winter barley varieties show tolerance to BYDV, meaning that if they become infected, they suffer less of a yield penalty in severe outbreaks than non-tolerant varieties.

Small quantities of tolerant seed are available this autumn, so consider these for early sown high risk situations.

The CAFRE agronomist confirmed that tillage farmers can look back on 2021 with great deal of satisfaction.

He said: “Most cereal crops have yielded well and grain quality has been very good. The same can also be said for straw.

Cereal growers who use locally grown seed should be able to get access to the varieties they need for the 2021/22 growing season.

“However, there is still a problem accessing seed varieties that come into Northern Ireland from Great Britain.

For this reason, I would strongly urge farmers to give their seed suppliers plenty of notice when it comes to procuring the seed they need over the coming weeks.”

A significant acreage of spring beans was grown in Northern Ireland in 2021. This is a direct consequence of the two-year protein crop pilot programme introduced by Agriculture Minister Edwin Poots. The measure will continue on in 2022.

“A small acreage of beans has been harvested up to this point,” commented Leigh McClean.

“But the main harvest is still a week or two away. However, hopes are strong that the vast majority of the crops grown, will be in store before the end of September.”

According to the CAFRE agronomist the development of grass weed control measures and slug monitoring programmes, should be a priority for cereal growers over the coming weeks.

He said: “Grass weeds, most commonly sterile brome, continue to be a problem in certain places.

Stale seedbeds are a useful way of reducing the weed seed bank on the back of light cultivation immediately after harvest.

“This encourages a flush of weeds, which can be burnt off before ploughing and drilling.

The CAFRE representative added that where slugs are concerned, it’s a case of assessing numbers before winter crops are sown.

“Traps should be set on damp soil using dry bait under a tea tray-sized cover. These should be left overnight and checked for slugs the next day,” he said.

Removing green cover reduces their habitat and feed source. A clod-free, firm seedbed allows seed to germinate quickly whilst restricting slug movement, making it harder for them to find seed and seedlings.

“If slug numbers exceed four per trap in cereals, or one per trap in oilseed rape, growers should consider applying ferric phosphate slug pellets if emerging crops are still at risk,” he concluded.