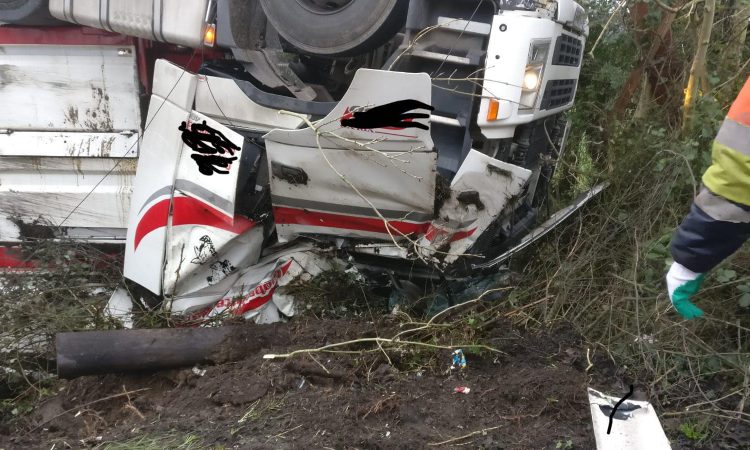 Firefighters in Northern Ireland freed a total of 40 cattle from an overturned lorry in Co. Fermanagh this morning.

The lorry had been driving close to the border in Newtownbutler at the time of the incident.

A spokesman for NI Fire and Rescue Service said: “At around 6:30am this morning, our Regional Control Centre received reports of an articulated lorry overturned at Cavan Road, Newtownbutler.

This was a particularly hazardous incident for our personnel to resolve, given the unpredictability, size, and the large number of the livestock involved – especially when distressed.

“When crews are mobilised to road traffic collisions, it is generally because casualties are trapped, and we rescue them using our cutting and rescue equipment. All calls are different obviously, but the incident this morning required a bit more than our normal response.

“We are happy to report that none of our crews were injured whilst performing rescue operations.”

The scene was attended by two appliances from Lisnaskea, a rescue pump from Enniskillen, Omagh’s specialist Large Animal Rescue Team, as well as officers from Enniskillen and Portadown District.

On arrival, crews established that the driver had managed to free himself from the vehicle. The driver was treated by the ambulance service. However, it’s understood he received no serious injuries.

A total of 42 cattle were trapped in the upturned lorry.

Assisted by a local vet, crews used cutting and rescue equipment to successfully rescue 40 of the animals. However, two had died in the impact.

PSNI Omagh and Fermanagh and the NI Ambulance Service also attended the incident.