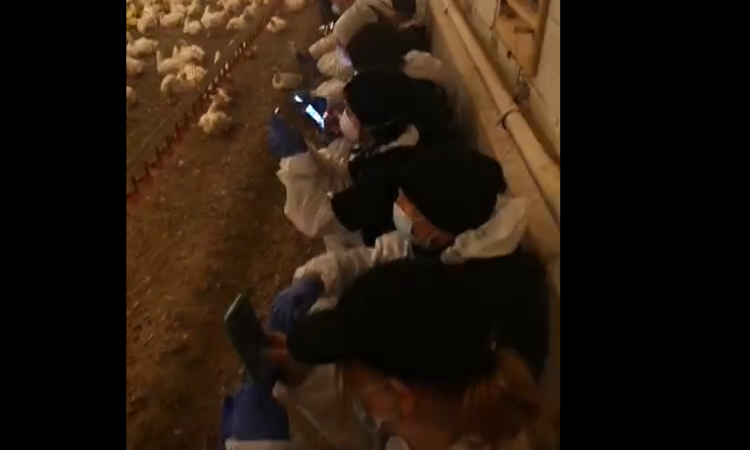 A group of animal rights activists have forced entry into a chicken farm in Moira, Co. Armagh in a dispute over animal welfare.

The group known as “Meat the Victims” entered the premises early this morning (July 2) and have stated that their wish is to “take the sick animals out to their own vet and then they will leave peacefully”.

About 10-15 activists are present in the shed.

The farm in question according to the activists, supplies chickens to Moy Park and is a Red Tractor affiliated farm.

One activist has had to receive medical treatment due to the heat inside the chicken shed.

The activists have been posting live feed videos during the night across social media and the video claims to show chickens that have been “long dead” still lying on the floor of the chicken shed.

The activists claimed that there was “30 sick birds” in the shed and that they wish to take them away for further treatment.

The activists main wish is to take the birds that they deem “sick” away for further treatment and then give them a “happy home”.

The group is campaigning for better welfare standards across farms in Northern Ireland and have held demonstrations previous to this one in Ballymena in January 2020.

The animal rights activists said that their aim is to “expose the inherent cruelty in the animal agriculture industry and show that the supposed high welfare Red Tractor stamp of approval is legalized torture”.