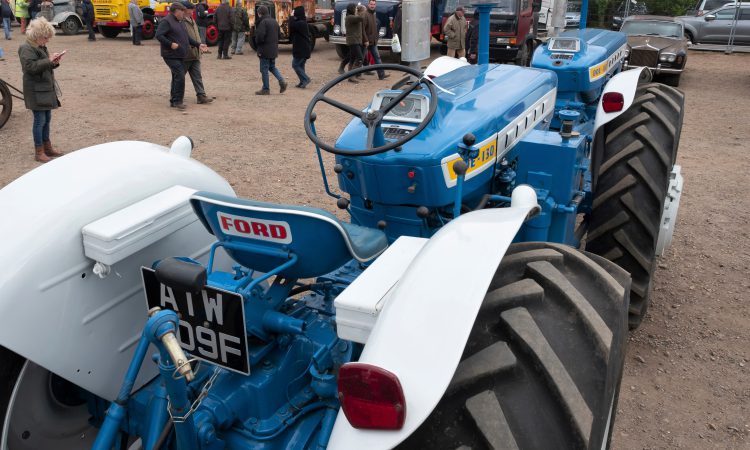 This ‘tandem tractor’ – serial number: D663 – was described as having “enormous provenance”.

A spokesperson for the auctioneers (Cheffins) said: “Not only was this one of the last 130s to be built, but it was also sold new to George Pryor of Navestock, Essex – the farmer and inventor who came up with the original concept that led to the development of the famous Doe ‘Triple-D’ tractor.”

“The 130 designation reflected the combined horsepower of the two 65hp pre-Force Ford 5000 skid-units.”

According to Cheffins, the new Doe design had “immediate appeal”. 73 were apparently sold during the following year (14 were exported).

Early models reportedly had a two-ram steering system, but this was upgraded to a four-ram layout in 1966.

Doe 130 production ended in May 1968. 170 were built. By then, demand for the machine had dropped away dramatically. Just three further tandem tractors were built. These were based on the up-rated Ford Force 5000 skid-unit and were badged as Doe 150 models.

Advertisement
This Doe 130 (the example at Saturday’s auction) was “sympathetically restored” in 1996 by the vendor and has been in his ownership since then.

Mechanically, it is believed to be in excellent order. Although an older restoration, Cheffins described the machine as “extremely presentable”.

So how did George Pryor get involved in the ‘tandem tractor’ story? According to Cheffins, it began in 1957 when George – one of Doe’s customers – began experimenting with two Fordson (diesel) Major tractors joined together in ‘tandem’.

His goal was apparently to produce a powerful, 4WD machine that could plough or cultivate his large acreage of heavy Essex clay. After much experimentation, George arrived at a workable pivot-steer design.

A machine with ‘potential’

The tractor reportedly performed “beyond all expectations” and became the talk of the area. Soon after, Ernest Charles Doe of the local Ford distributors – Ernest Doe & Sons – paid George a visit.

He could see the machine had potential; an agreement was reached for the company to put the tractor into production.

The production tractor, based on two Fordson Power Major skid-units, was launched in 1958 as the ‘Doe Dual Power’. Following a number of modifications, the tandem design was re-launched the following year as the ‘Doe Dual Drive’ – usually referred to as the ‘Triple-D’ for short.

George kept his original tractor, modified and improved by Ernest Doe & Sons, for 10 years. He and his brother bought a new ‘Triple-D’ each in October 1961; George later purchased this Doe 130 (from Saturday’s auction) in May 1968.

Though not the last to be built, George believes that his Doe 130 was the very last to leave the factory at Ulting.