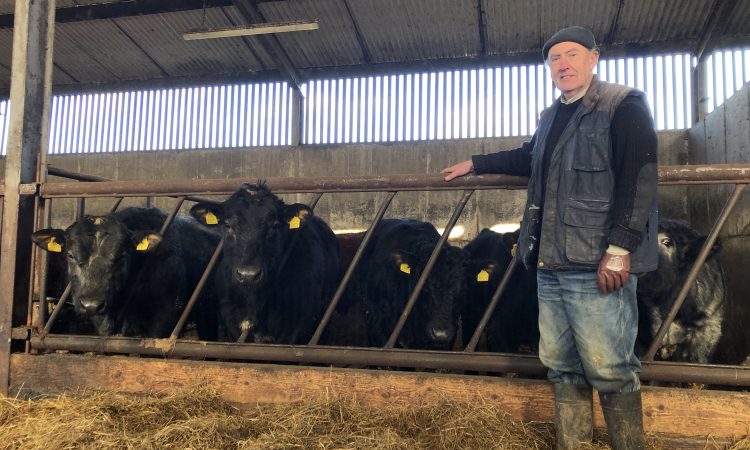 When you walk into the suckler housing belonging to Brian Brady from Co. Cavan, there are no signs of your typical commercial Limousin, Simmental or Charolais cow.

Instead, the shed houses good traditionally-bred Angus cross cows with a mixture of Shorthorn breeding.

Farming over 60ac on the outskirts of Kilcogy, AgriLand recently spoke with Brian about the management of his 25-cow suckler herd and his approach to breeding on the farm.

Overview of the farm

Suckler cows were always one of the main enterprises on the farm, with Brian taking over from his uncle back in 1984. Currently there is both a suckler-to-weanling/store and suckler-to-beef enterprise in operation on the farm.

The bulls are weaned from the cows at winter housing in October and carried through until the following spring where they are sold off in the local mart in Granard.

From the heifers born on the farm, five-to-eight are selected for keeping on as replacements, while Brian aims to slaughter these females at ages of 20-22 months-of-age.

The herd is just beginning to start calving, with the cows aimed to be fully calved down by the end of April, meanwhile the in-calf heifers are to be calved down in the month of May.

There is also a flock of 30 ewes ran alongside the suckler herd, which have already been lambed down and consist of mainly Suffolk cross which are ran with a Border Leicester and Texel ram. 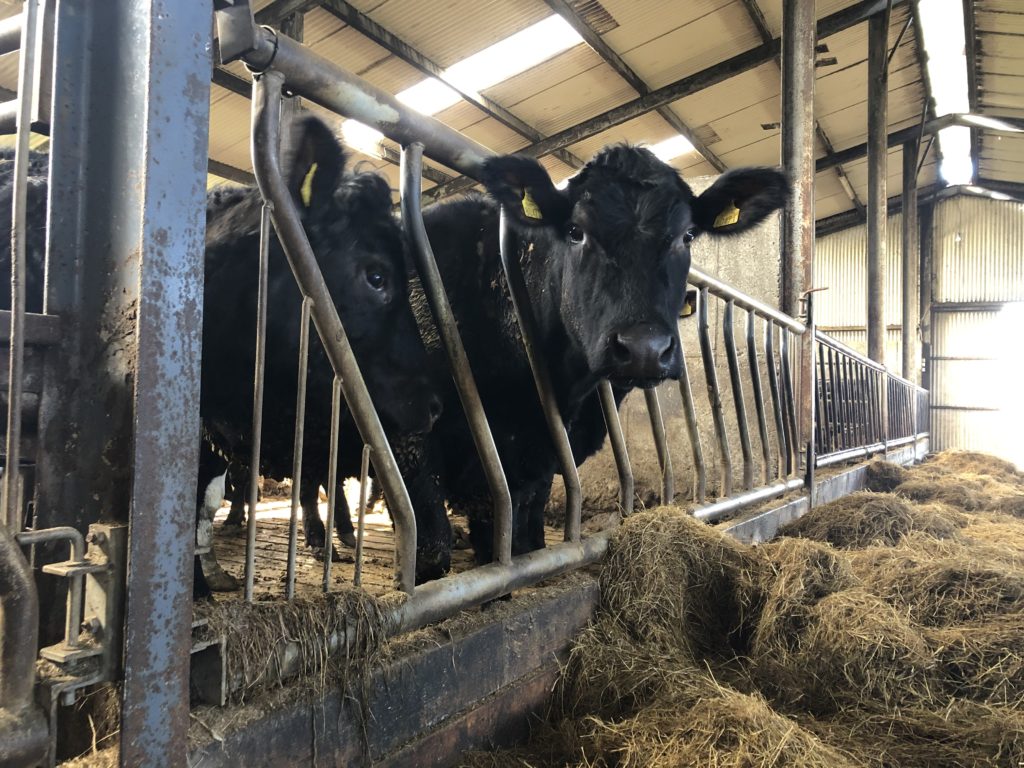 As previously mentioned, the cows on the farm consist of black and red Angus and Shorthorn cows, but Brian explained how he had trialed the use of continental breeds on his farm over the years.

“When I started suckler farming and took over the farm myself I was using Charolais and Belgian Blue bulls on cows up until recent years; I also had Charolais and Limousin cross cows on the farm,” he explained.

“I just didn’t have the help when it came to calving, especially if I was going to be getting into bother – now I do have good neighbours that give me a hand but I couldn’t be calling on them the whole time.

I made the decision to switch to using mainly an Angus bull on the whole herd and a bit of Shorthorn through the mix. I find these type of cows to be easier managed and maintained and easier to calve down at the same time.

“I don’t buy in any cattle except the stock bull, so I breed my own replacements and that’s how I built the herd that I have today.”

‘Granard was a Shorthorn area’

Brian reminisced about the time before he took over on the farm, remembering the type of farming and breeding operated in the Cavan/Longford area before the introduction of continentals.

“Long before Ireland joined the European Economic Community (EEC, now the EU), back in 1950 all that was around this farm was a Shorthorn cow.

The way things worked back then is that farmers walked the cows to a bull in the local area; usually it was a Hereford bull, but there was a farm close to here that had a Shorthorn bull he was the go-to sire for this farm.

“I remember when I was working on the building of Granard Mart – most of the cattle that passed through the rings had Shorthorn breeding – then their popularity dropped when the continental breeds were introduced.

“Now I’m beginning to see more farmers enquiring and wanting to get back into the Shorthorn because they are producing the roan colour that farmers are looking for in a breeding heifer.”

Getting back into the Shorthorn breed

“I wanted to move away from using all Angus bulls and get more into the Shorthorn breed, so two years ago, through the Shorthorn Marketing Company, my neighbour sourced me a bull which I leased and let run with the cows for six weeks.

He was a good lengthy bull with great muscle and son of Alta Cedar Perfect Storm.

“During the same year, I bought another whole-white Shorthorn bull from the same Rincoola herd from Granard, that was actually a half-brother to the first bull I had. I held onto him and I will have him for this breeding season.”

Speaking about the breeding strategy on the farm, Brian added:

“I AI the heifers first of all with an Angus bull and then I will let them run for their second breeding season with the Shorthorn bull.

“I like to have them calving down at 30-months-old; I used to mate the heifers when they were younger but I won’t repeat it again. I want them to have that bit of strength and power.”

Like most suckler farms, Brian is looking forward to getting the cows back out to grass as soon as possible. He states:

“As soon as a cow calves and the calf is strong enough, I will let them out to a paddock beside the shed incase they have to come back inside.

“Over the winter I don’t feed the cows any meal; they will only receive a pinch or so when they calve if I think that they need a push-on with their milk performance. All the stock is fed on good quality baled silage.

“The weanlings are fed close to 2kg of meal/day, which is a mixture of a 16% beef nut and rolled barley.” 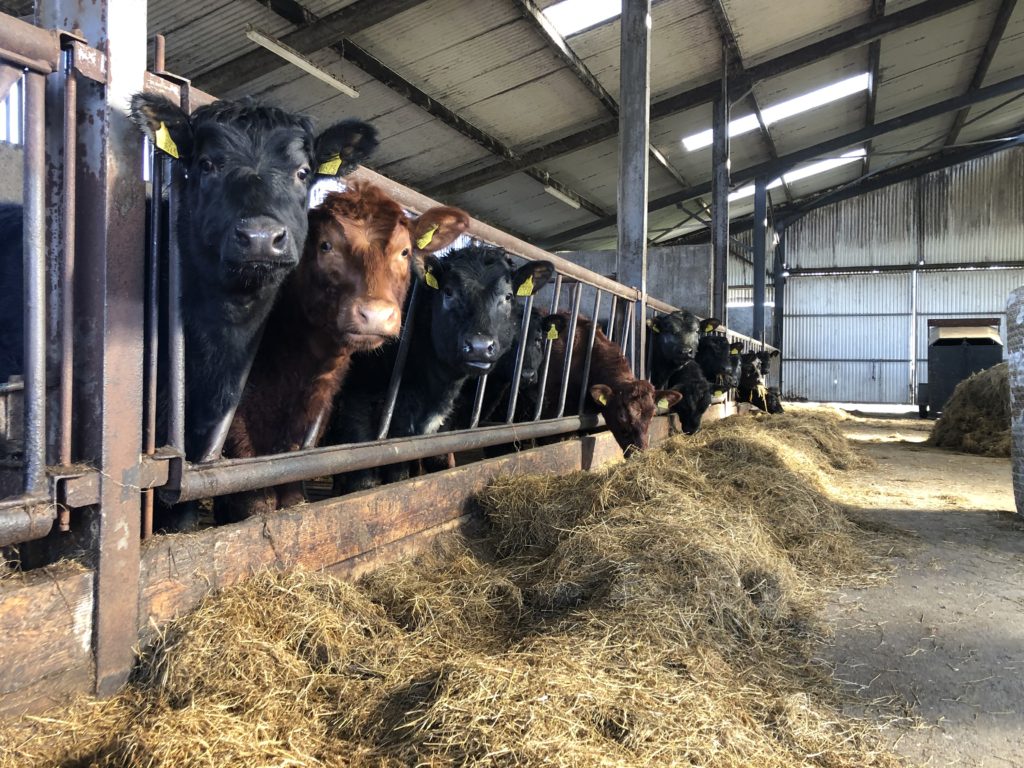 Solving health problems on the farm

In the existing double five-bay slatted shed with a dry bedded lie-back area in one section for calving, Brian explained that since building the shed, his herd’s health problems have diminished. He said:

Before I built the slatted shed I was working out of an older type farm yard with a smaller shed and it was just torture trying to mange the calves and keep them healthy.

“I have good ventilation and have had little or no issues with scours since I moved into this new shed – I keep the bedding freshened up as best as I can and as soon as a cow calves and the calf is ready, I turn them out to grass.” 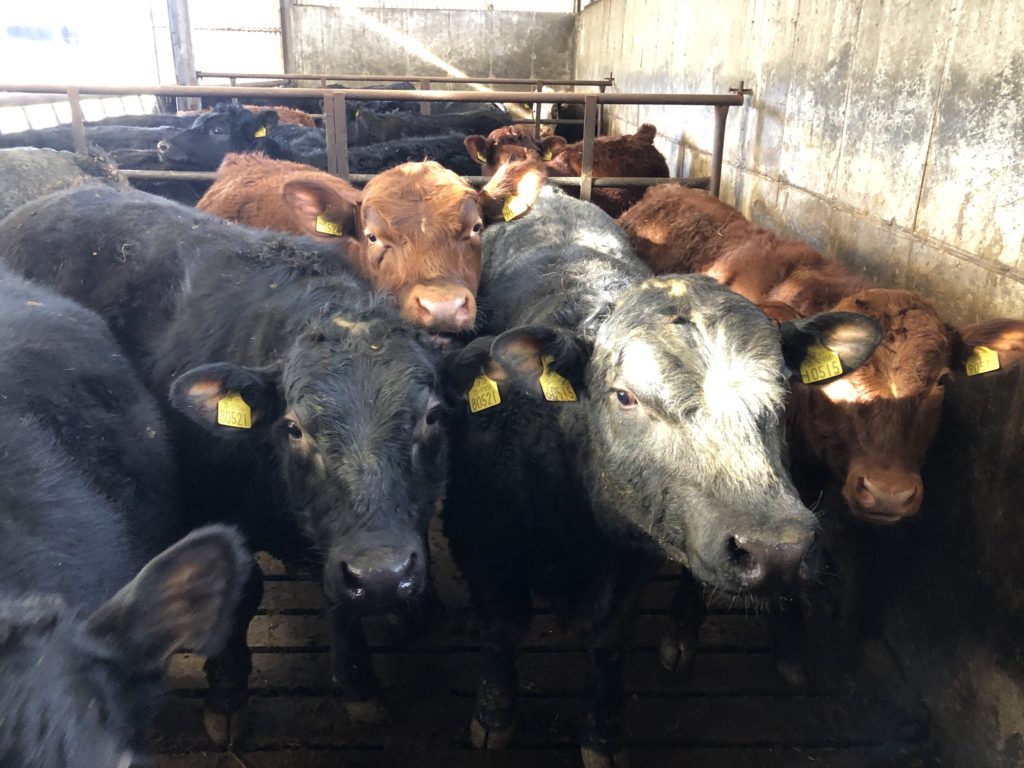 Brian remembers one issue he had with his weanlings back in 2019 when it came to housing them.

“I used to leave the weanlings out on grass for a bit longer in the year before I housed them but they were just doing too much damage to ground – so in 2019 I housed them straight after weaning and I had a serious issue with pneumonia. I nearly lost a few weanlings because of it.

“So back in September 2020, I gave the weanlings the vaccination against RSV/Pi3 and Pasteurella pneumonia, then once they received the following booster shot I housed them and I had no issues at all this year.”

‘The cows need to make money on this farm’

When asked about whether or not the farm had taken part in the recent beef schemes such as the BEEP-S (Beef Environmental Efficiency Programme – Sucklers) or the BDGP (Beef Data Genomics Programme), Brian stated:

“The farm is not participating in any of the major beef schemes. When it comes to income for the beef enterprise on the farm, the cows need to be making money.

She needs to be having a calf every year and I don’t tolerate a problem cow. 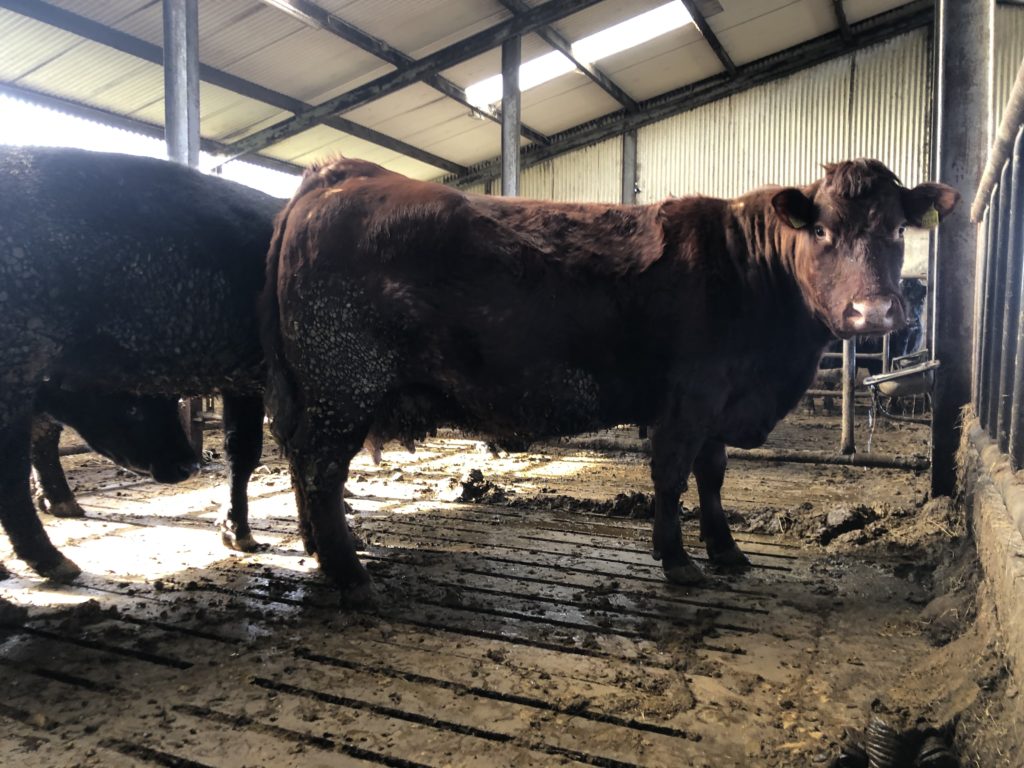 “When it comes to breeding I’m not looking at the stars that she has, I’m looking at calves she is producing, the calving interval and the physical traits of the cow/heifer – I will make my judgement of how good she is off of that,” he concluded.